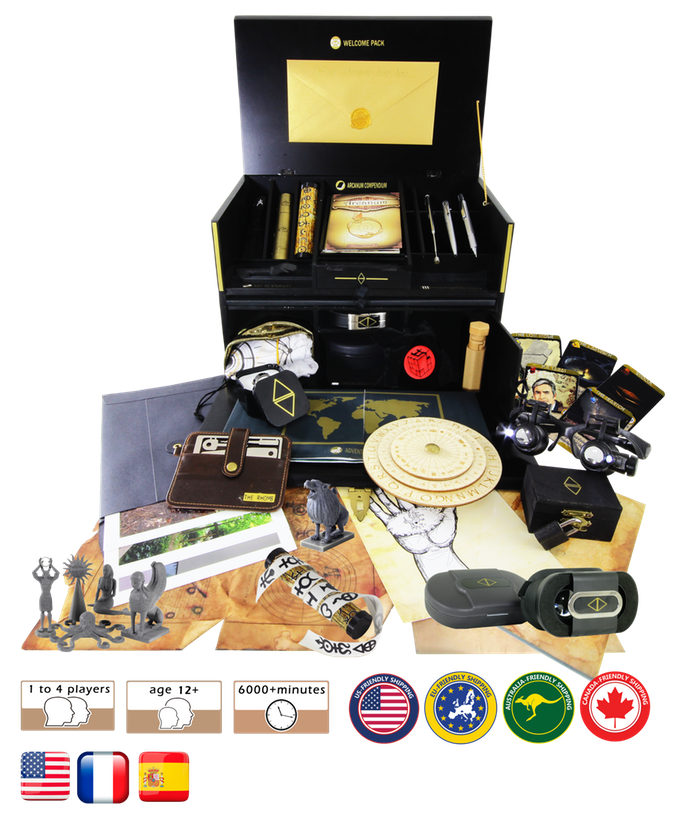 There are a lot of “escape rooms in a box” on the market, ranging from print-at-home card-based games to much more involved ones like the Werewolf Experiment. The Enigma Box, which has recently launched on Kickstarter, is an order of magnitude more ambitious than any of those. It’s a game that claims to pull together Virtual Reality, Augmented Reality, card-based puzzles, physical props, tools and something that looks more like a case than a board game box. If it lives up to its claims, it seems like it will be well worth the £150 pledge required to secure you one of the initial copies.

That’s a big ‘if’, though, and one that’s been discussed at length in several of the enthusiast forums that I’m a member of. I’ve been surprised both at how cynical people have been about the product in some ways and at how accepting they have been in others. To be entirely honest, I’m still on the fence. I can see a lot of merit compared to other Kickstarters I’ve backed, but I also see a lot of pitfalls so, as part of working out whether I want to back it myself, I thought I’d write down my thoughts on the project and some of the comments that enthusiasts have made about it.

The first thing that you’re likely to see when you look at the Kickstarter page is the price. £152 plus postage makes this game approximately double the price of a real-life escape room, so they’re obviously positioning this as a luxury purchase.

A lot of people have been put off by that price tag – complaining that they can’t justify so much money for something that’s on Kickstarter and may never deliver. I agree that I don’t want to throw away such a sizeable sum, but what I will say is that I’ve backed three escape rooms on that platform, in each case with less evidence of the product than in this one. Indeed, I’ve regularly booked in to play new escape rooms without knowing anything about them. While dubious Kickstarter projects are often light on evidence, I think you have to take into account that this is an escape room project, which therefore can’t tell you much about what’s on offer.

What do you get for that money, though? Well, according to the site, 100 hours of gameplay, the welcome pack, a booklet, 60+ riddles/puzzles, 30 “investigations” (clues?) and historical documents, a Cardboard-like VR headset, VR and AR content, a board game map, a T-shirt, a badge, some props (3D-printed, judging by the images), a decoder wheel, a variety of tools, a pack of cards and, of course, the pretty box within which it’s all contained. That’s really quite a lot of stuff and, ironically given people’s comments about it being expensive, I’ve heard other people worry that they’re not charging enough to cover that wealth of components and so will end up struggling to deliver. Could I see it being put together at that price? Yes – AR and VR content is increasingly easy to generate, most of the items aren’t that expensive, and the fact that they’ve got a realistic picture of the components suggests that they’ve gone a long way to doing the work already, so they don’t need a huge amount of money to complete their endeavour. Will it be easy? No – there’s a big difference between pulling together one test kit and putting together a production run of 500+ copies. Factor in the labour of sourcing and packing or talk to anyone who’s listened to Juliana and Ariel from the Escape Room in a Box team, and you’ll be pretty confident that they’ll hit some issues along the way.

The video they’ve produced certainly suggests that most of the components are real, which is a big step up from many Kickstarters!

Another angle where they’ve received criticism is that they’ve gone over the top with their descriptions and comments. I always find it difficult to distinguish between what’s sensible marketing speak and what’s misleading advertising. A few examples:

Those are pretty bold claims and, to be honest, not ones that I’m inclined to hold much faith in. HOWEVER, that’s also true of escape rooms that advertise themselves as the “most technologically advanced escape room ever” or “the best escape room in the country”. At what point do you move from marketing bluster into misleading claims? To be honest, the more worrying thing is that they think people who are likely to fund this kind of project will think that graphene makes the box more attractive or that it would matter if this was the first time VR had been used to create a 100% real and virtual game. Do they really know their market well if that’s the sort of claim they’re leading with? (Apparently well enough, given the project is already funded…).

The last claim is one that I find a little more interesting – the game could very well improve your dexterity and intuition, your understanding of the world and your knowledge and skills. Most of those are strange claims to have on a game, though – I don’t think they would particularly convince people to buy it and, again, I’m left wondering whether they really understand their audience (or whether I do…). The one exception is about improving your understanding of the world. It would be great to think that this will give you insights into geography and history. In fact, judging by the project, I wouldn’t be at all surprised if it did. That seems like something that might help sell the story.

Perhaps the boldest claim is that it’s 100 hours of adventure. A lot of people immediately said that it was a ridiculous claim. I can see three ways they can make it last that length of time: First, through tedious puzzles, such as an entire book of sudokus or something similar. Creating 100 hours of puzzles isn’t difficult. Creating 100 hours that are varied and on theme is much trickier. The second is if the puzzles are either numerous or involved. I’m not inclined to think they’ll be very numerous (although I hope well in excess of a typical escape room!), but I could well imagine that we might need to explore through Google Maps or similar to find information. If anyone has ever played Geoguessr, they’ll have a good idea how easy it is to waste time wandering through foreign lands. They could easily create a game that requires you to scour a map to progress. Perhaps not the most exciting of endeavours, but no sudoku-fest either. The final way is if you have to physically leave the comfort of your home and head to some specific co-ordinates. There could be challenges that were accessible only at a series of coordinates around the globe. With a little autogeneration and some careful editing around the biggest population centres, they could create something that worked for everyone but still had famous sites to visit.

It’s not clear to me what the 100 hours will involve or, indeed, if that’s the playtime for a typical group or the sort of audience that this blog has. On balance, I’m hoping that it’s more like a 24-hour experience at most, with the 100 hours referring to “normal” players without puzzle experience. I don’t think they’ll be able to get sufficient quality content to keep most people engrossed for 100 hours; and, in order to truly deliver a great experience, they’d need to make sure the puzzles ebbed and flowed to maintain the right amount of engagement. That seems too much of an ask.

Finally, we come to evidence. The number one thing you want from a Kickstarter project is some sort of evidence that there’s a real project. That’s where things become decidedly sketchy. Although there’s a video showing them playing with components, it suffers from a distinct lack of puzzles on show. Now, it’s reasonable to think they’re trying to hide the puzzles as much as possible, but I’d still like them to give a few examples. If it’s genuinely 100 hours, what’s an hour’s worth of puzzles going to cost them?

If they really don’t want to give away their secrets, then the obvious thing would be to get a reviewer to review the project. As far as I can see, they’ve not had anyone test their game. Ignoring the project, that’s scary given that they’re looking at delivering 100 hours of puzzling in only six months. They desperately need to get as many eyes as possible on these puzzles and start to refine them. From the point of view of prospective customers, it’s worrying that they haven’t got the game to the point where they feel they can get beta reviews. Surely if they had, they would have reached out to people to get some reviews or testimonials written.

Perhaps we’d feel a little more comfortable if they were willing to say who’s involved with the project, but so far there’s been little more than a name and a virtual office in London. They’ve mentioned that the team includes designers “with many successfully running escape rooms and team building corporate games around London and Madrid“. Now, I know most of the escape games in London, and I know most of their origins, and I’d be surprised if I didn’t know someone who’s been involved in escape rooms in London. I’ve heard absolutely nothing about the project, which leads me to believe that they’re talking about building corporate games. Again, marketing bluster. But still – without names, it feels like they’re being deliberately misleading.

The one name I have come across is Elouan Beauséjour, mentioned in their comments section as an archaeologist who’s worked on the game.  Maybe he’s real, but his Twitter account was only created in March of this year and has been filled with links to articles whose headlines have been copied verbatim in a form very similar to, say, ArchaeoNews – a Twitterbot that churns out hundreds of archaeology stories each day. Interspersed in that feed are stories about Jules Verne-related discoveries which don’t appear to be of the same format. All that said, I suspect it’s just an elaborate backstory for the game. Maybe the time capsule he claims to have found is real, maybe it contained something interesting. However, I doubt it – the references to codes, anagrams and “alchemic references” make me feel that it’s a bit too intertwined with the Enigma Box to have inspired it in just a month.

At this point, I’d really like to either give it a ringing endorsement or tell you that I think it’s doomed to failure. To be honest, on this occasion, I really don’t know. There’s plenty here to suggest they’ve taken it seriously – aside from a few typos, it’s a well produced Kickstarter page with finished props clearly on display and plenty of content already generated. I’m pretty confident that there’s a product here and that they’ll manage to deliver something. The issue is whether there’s a good product. On that front there’s next to no evidence, which leaves me very, very worried. Yes, there are some questions over the virtual office, the lack of real names related to the product and the dubious Jules Verne tie-in, but I’m far less worried about those.

So, I guess that leaves the decision back in your court: Is the glass half empty or half full?

Tweet
Previous Post: When Escape Rooms Go Wrong! (handling breakages and mis-sets)
Next Post: The Real Escape (Portsmouth): The Guardians of the Elixir, Dr Ryddle’s Memories, The Chamber of the Deep