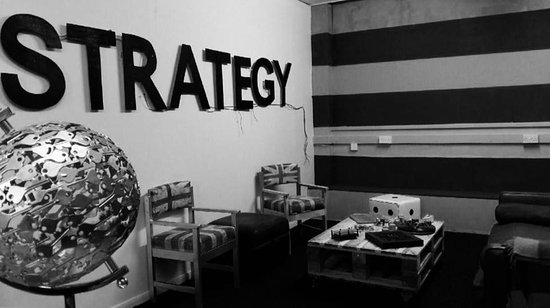 Just a short distance from Newcastle, Sunderland seems to be almost entirely overlooked from an escape room point of view. Nestled in a small business park next to a residential area in the outskirts of the city, The Strategy is not the easiest of venues to reach. Once you’ve found the postcode, you still have to find the right building and, even once your GM comes down and collects you at the door, it’s a fair way to the reception.

That adds to the joy of coming into a lovely little waiting area with lots of pretty decoration, surrounded by a host of paper keys stuck to the walls by previous players as a way of recording team names and times. It’s a nice variation on writing on the wall, and there’s something satisfying about signing their (hand cut!) cut-outs. That’s in keeping with the owners, who are lovely people and show a passion for escape rooms not just in general but in how they want to create them.

We played three games in the venue. The Box and the Vault are both solid escape rooms. At first glance, the Box has simple decoration, but your appreciation of it grows throughout the game, and it’s probably their hardest from a puzzle point of view. The Vault is a step up in decoration and, while its puzzle style felt a little repetitive at times, it conveyed a fantastic, frantic feel to the experience. The highlight for me, though, was The Way to Wonderland. We played it just before it opened, but it felt like it was already bedded in. It was a significant step up visually but, more than that, it had a clever layout. The variety of puzzles wasn’t as wide as in The Box, but they’d avoided some of the weaknesses I saw in the Vault and created a room where the challenges were all enjoyable and perfectly logical. Definitely one of my favourites from the set of North East games I’ve played, so I’d recommend taking the trip across.

Walking into this room, I have to confess I was underwhelmed. You could easily be forgiven for thinking that they’ve not put much effort into the build but, as the game progresses, you’ll come to realise that their representation of The Box is very much a deliberate choice. This isn’t meant to be a nice place to be in, and that stark interior very much conjures up the feeling of being trapped inside a box on a journey to a far-flung land.

Surprisingly – to me at least – there was actually quite a bit of story within the game. It’s an unusual theme, and I thought they’d probably just leave it there. Instead, as you make your way through the experience, you pick up tidbits of information that help to make this a much more rounded experience than a typical room.

So, there’s interesting decoration and story, but what about the puzzles? Well, things are good there too. They aren’t going to blow you away with their originality, but they don’t detract from the experience either. What they will do is keep you busy, with plenty of challenges on offer and parallel paths through those puzzles that allowed our team of two to work relatively independently for much of the game.

On top of that, there’s a nice structure to the opening of the game that gives you a feeling of progress and some sense of how far through the experience you are. As you might expect for a first experience, it’s a relatively low-tech game, with most puzzles resulting in a code or a key. In spite of having lots of padlocks, though, we didn’t find there was much ambiguity on where to enter solutions – you certainly won’t be zooming round the space trying a code on ten locks. That variety came partly from the diverse range of puzzles – in spite of how many there were, they never felt repetitive.

From all those puzzles, only one frustrated us, with a slight red herring in the solution leading us down the wrong path and the correct path requiring us to make an assumption that I felt was a little dubious. For me, highlights included a surprising reveal at one point, a solution that felt very thematic and a couple of physical puzzles. One was a supersized version of a game that you’ll likely have played many times but was still lots of fun, and another was a simple interaction with the room that was made more interesting simply by its unusual location.

The Box is a solid game – it’s not going to amaze you, but there’s plenty in there for enthusiasts to enjoy and little to frustrate. We played as a pair and got out with a couple of clues in just over 45 minutes. I think it would work fine for teams of three or four  – there’s plenty of space, and the layout encourages you to wander round and investigate.

From the moment you walk into the room and see the titular Vault, you can be reasonably confident that exploration isn’t going to be a key factor in this game. That said, there’s something tantalising about being able to see, but not yet interact with, a part of the space. Sometimes a surprise can make a room special, but the effect of anticipation can be just as good. The Vault looks far more professional at first glance than The Box, but it lacks the overpowering nature of the decoration in their first game. At its heart, this is mainly an office game (albeit a period one with pretty decoration), and not a big one at that, so it’s very much the vault that will draw your attention.

Again, there are plenty of puzzles on offer although, on this occasion, there was a more linear feel to the experience. That was a real shame because, due to the nature of this room, they could easily have parallelised it during the latter stages. The way they’d chosen to reveal the puzzles also meant that we rarely had time to mull them over while solving something else, with the result that we got bogged down on a couple and felt a little clue-happy towards the end. Being able to take a break and come back to them would have been far more fun – particularly in the case of one that felt like it had several possible solutions. We also found, particularly towards the latter stages of the room, that some of the puzzles felt very repetitive – both in the sense of the puzzle style and in the use of similar mechanics for entering the solution. Again, the set-up of the game would have lent itself well to a varied series of rapid-fire puzzles to finish the experience.

With most rooms, you have a sense of how many puzzles are left to solve by how many locks there are to open. Not here – it’s really hard to judge how long the end sequence will be. How you find that will be very much a personal thing but, for us, that lack of a progress gauge left us fairly stressed and perhaps encouraged us to take more clues that we would otherwise. In the end, we escaped with just over 45 minutes on the clock having taken four or five clues.

Again, this is a fun game that would be a great experience for relatively new players, albeit a challenging one. There’s decent period decoration, a sense of anticipation to the room and a bunch of fun puzzles – even if they do get a little repetitive at times. We played as a two, and I’d suggest experienced players stick to that or maybe three players due to the relatively small space and linear finish.

The previous two games had solid sets with distinct characters, but Wonderland is streets ahead of either. They’ve taken advantage of some of the iconic imagery from Alice in Wonderland to create a gorgeous space that was a joy to spend time in. Different parts of the game had a very different vibe, but the quality was high throughout and will appeal to both adults and children.

There’s no real story in the game, or at least I didn’t really follow it if there was. You’re exploring an Alice in Wonderland-themed space and solving puzzles along the way. They make good use of the theme, although I felt they got a little caught between Alice in Sunderland and a pure Wonderland experience. It didn’t detract much, but there were a couple of places where it felt out of keeping – almost a little too down to earth when compared to the magical whimsy of the rest of the room.

The highlight of the experience for me was the layout of the game, which created a sense of anticipation and intrigue. Games are so often dull in their use of space, with little more than a secret door to a new room to excite you in how they’re laid out, but this had me constantly wondering what might lie ahead. As we continued our investigation of the room, we weren’t disappointed.

It felt like there were fewer puzzles in Wonderland than in their other two experiences, but they’d got back to their best in terms of variety. I rarely felt like I was turning the handle solving standard escape room puzzles and instead had to exercise my brain cells on a variety of interesting challenges. The one exception to that was a swathe of puzzles in the middle of the game which were all very similar and which some players might find relatively disappointing. Personally, I found them quite satisfying and, while they weren’t difficult, I suspect that the kind of coordination they require will make them more difficult and time-consuming for larger teams, although in a fun and frantic rather than frustrating way!

The biggest negative to me was probably a fun physical puzzle that looked impossible. In fact, it turned out to be possible – we found a way of solving it within the rules but also found out that the rules weren’t as strict as the game made out. I find that frustrating – you need to trust the instructions inside the game, and even a small deviation can lead to you burning time and losing faith in the room.

During the latter stages of the game, there’s a nice sense of progress as you home in on your final challenge, and it rounds off with a solid finish that leaves you confident you’ve reached the end. It’s not a spectacular finale, so expect to leave happy but maybe not charging through the door.

We escaped in 55 minutes having taken a single clue. Overall it’s a pretty linear game, and there were a few places where it didn’t lend itself to multiple people crowding round puzzles. If you’re keen to always have a front row seat for solving, then think carefully before taking four people. In fact, overall it felt like a pretty intimate set so, if at all possible, while there’s enough room for more, I’d encourage you to play as a two or a three.