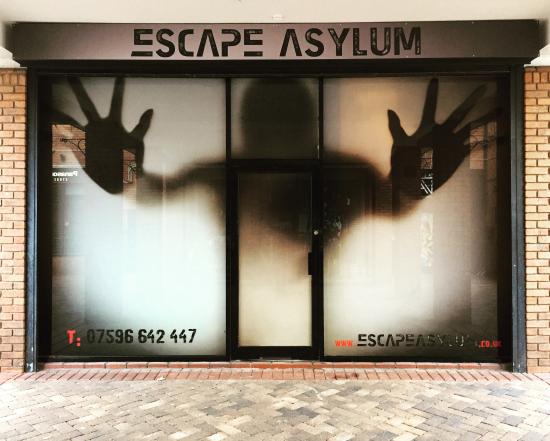 Escape Asylum is a company that shows an unsuccessful Kick Starter campaign doesn’t spell the end. They bounced back from that disappointment to a successful launch in March 2016 and have since filled out their venue with a total of three games. Their themes tend towards the darker experiences, with the first room we did, Hostage, being the only one I wouldn’t put in the horror genre.

The waiting area here isn’t huge – in fact, they stagger their games to avoid congestion in the reception area – but it’s reasonably comfortable and, more importantly, the staff are friendly and engaging. If you’ve got a few minutes to spare, you can take a look round the space to see the times other teams have set – you’re allowed to write on the walls after a successful escape.

You are MI6 spies, who have infiltrated a terrorist cell know to contain rogue agents. For the last two years you have been working undercover to identify the names of those who have gone rogue. You were on target to complete mission, until something went seriously wrong…

You wake up chained, blindfolded and disorientated in a dark room. You quickly realise that you are now being held hostage in your own safe house. Your cover is blown. One of the rogue agents had made you a few days before, and has now wired the building to blow in 60 minutes with you and all the evidence of your mission inside.

Are you intelligent enough to save your own life?

OK, I’m impressed. I’ve played a lot of games where you’re handcuffed (well, around 30), and this is the first where I’ve seen safety releases. It’s great to see a company taking this simple precaution to make the play safer. So yes, this game starts with you in handcuffs but, although it fits the hostage theme, it doesn’t add a huge amount in my opinion. The good news is that you shouldn’t expect to be in them very long. Interestingly, you’re not all released at the same time but, happily, the GM didn’t allow those of us still locked up to be left behind. That was a good decision – I’ve seen GMs allow games to progress with only a subset of players involved in the belief that intervening will break immersion. They’re right, of course, but intervening also makes the game more fun, which should be the priority. Obviously, it would have been better if the game couldn’t have continued without everyone being unlocked but, in the absence of that, the GM intervention is the best option. No one wants to be left bored while their teammates complete the room…

It’s not a pretty start, but this is meant to be a safehouse, so they can get away with a pretty grubby room. There’s a little theming along the way that suggests they’ve not just used the story as an excuse to be lazy. It does feel like it would be quite tough for first-timers – with a fairly bare start, they don’t get their hands held to solve a couple of simple puzzles and are instead thrown in pretty much at the deep end. There’s no significant story development during the game, but you do learn a bit more about some of the characters, and I quite enjoyed the feeling that we were attempting to both escape and investigate our captors.

After that opening sequence, things didn’t get much easier. There’s a search in this game that we considered a possibility but then gave up on because it seemed like it would be insanely tough. Eventually, we asked for a clue and were shocked to find that we really were meant to perform that search. With a little direction, we were able to locate what we needed, but it felt like a huge leap to us.

The game felt like it had been designed with two parallel puzzle paths that occasionally joined back together. At least, we approached most of the game as two pairs and that seemed to work reasonably well with us rarely feeling like we were stepping on each other’s toes or having several strands to follow. The puzzles were reasonably varied and while they were generally escape room logic, they did at least make use of the theme.

There were two puzzles that formed the finale of the game. One felt exactly on theme – the sort of thing you might need to do to deal with a terrorist organisation. The other was, well, entirely random. Like they’d needed another puzzle that would delay teams by five minutes and had just shoehorned in the first one they had come across. It utterly broke the immersion and made zero sense in the game. Furthermore, while outside-the-room knowledge wasn’t required as such, it was extremely helpful if you did happen to have it. In fact, I think it would be pretty much impossible for some people without it. That was a shame, because the rest of the finale sequence worked well.

Our team of four escaped in 29.59 having taken a single clue. Clues come over the walkie-talkie from your handler. As with all games at Escape Asylum, you get three for free, and then the rest add a minute to your escape time (but you still get the full sixty minutes in the room).

If you are heading along, I’d suggest no more than three enthusiasts. That’s enough to solve the puzzles, and any more players will result in the end game feeling a little crowded.