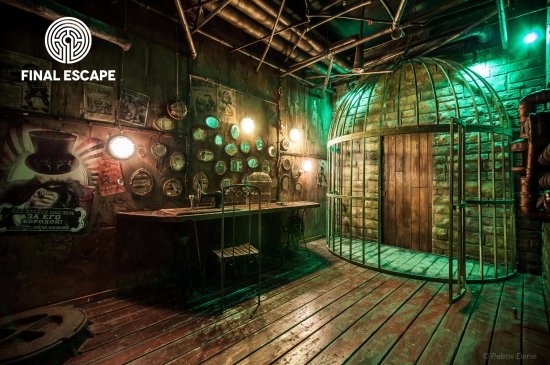 Final Escape is easy enough to spot as you wander along the street – it’s the one with a car in the window. I’m not entirely sure why it’s there, but my best guess is that it’s related to the game they’re planning to open (Trabi Race 2030), which I was sad not to be able to play. There are few things I associate with East Germany more than the Trabi, so a game based around that iconic car would have been appealing.

The three games we played here fitted into two very different categories. Steampunk Puppeteer and Robot Paranoia are some of their modern games, with automation, theatrics and amazing decoration, while Prison Break is more of an old-school game, with padlocks, minimal automation and relatively bare set design. That said, of the three games, Prison Break had by far the most solid set of puzzles, so I can well imagine some people enjoying that one far more. Personally, I was torn, with all three doing reasonably well in my books, but the theme of Robot Paranoia captured my imagination just a little bit more, which helped to overcome some of my frustration at its puzzles.

Interestingly, both this and House of Tales’ games appear on the Escape Game Solutions website, which perhaps explains their similar feel.

The walk to the Puppeteer sees you enter the “Steampunk” wing of the building, with the corresponding props and a large, well decorated room that I assume is used for corporate entertainment. There’s enough on display to make you realise that they’re taking their theme reasonably seriously but, once you get inside, they’ve ramped it up to the next level. The picture above isn’t just marketing: it’s a real view of the game.

Inside is a beautiful space with an engaging combination of workshop and steampunk that manages to capture the mixture of historic and futuristic ideas that the theme requires. You start off in a relatively restricted part of the room but with a clear view into other parts. This creates a sense of anticipation as you start to look round at what you may come into contact with later in the game. That set quality continues throughout the experience, with a nice balance between the general decoration and the individual props that few rooms manage.

Puppeteer is a certain style of game that I always find a little frustrating. The key to progression is spotting what the designer meant you to do next, but I was continually left with the question of “Why am I doing this?”. If you’re OK with accepting clues, that won’t matter in the slightest – they’re very happy to jump in and offer cryptic help as required – but I was left feeling like they’d had to lead us through the game with the four or five clues we received rather than just helping us when we were missing something obvious.

Given the style of puzzles, I was surprised to find plenty of red herrings, particularly during that opening section, which left us with lots of items that might or might not be useful. In the end, we were mostly right with what was relevant, but I found that this interacted badly with the slightly more obscure puzzles, leaving me feeling a bit lost more often that I’d have liked.

Having said all that, there were some solid puzzles, several of which added a sense of theatre to the experience. This kind of room relies on how you can interact with the environment, so it was pleasing to see that a few of those interactions weren’t there just to solve puzzles but also to push the experience along.

There’s a fun centrepiece to the finale which is equal parts scary and cool. It felt like one of those puzzles that look great on the drawing board but struggle a bit in the final implementation. Both our teams hit problems with making it work, suggestive of either poor instructions or faulty equipment. In our case, it only held us up slightly, but our sister team was much closer to the wire and found it incredibly frustrating as they tried to overcome the frailties. Obviously, two teams’ worth of data is just anecdotal, but my gut feel is that they need to re-architect that puzzle to prevent some of the final memories of the room being ones of frustration.

Confession time: I’m a big fan of post-apocalyptic stories, which meant that, with its dystopian AI future, Robot Paranoia won me over pretty much as soon as I walked in. With its concrete and metal furnishings and graffiti-inspired decoration, it manages to convey a particular view of the future that, though not exactly pretty, is at least powerful. While the style changes across the game, the standard of decoration remains uniformly high.

This game really conveys a sense of exploration, taking you on a journey behind the cyborg frontline that involves you doing far more than just unlocking a few doors and cupboards. I was particularly impressed with one transition early on in the game which seemed an audacious inclusion in the room, but – truth be told – this game was littered with pieces of exploration that stood out.

The puzzles generally made pretty good use of the theme, but they were definitely the weakest part of the game for me. Some were really simple implementations of tropes that didn’t make sense in the story and really didn’t fit in a modern game like this. One fairly central puzzle proved to be the most problematic. I suspect most teams struggle with it (both our teams certainly did), but the particularly frustrating thing was that our team noticed something in it that sent us down entirely the wrong track. It’s a relatively minor detail that most people presumably miss, but it left us trying out random combinations for fifteen minutes because the “correct” solution was inconsistent with the detail we’d spotted.

What I did like was the way they used tech to hold some of the puzzles and present them in a way that made sense with the narrative. At times, they even managed to inject a bit of humour alongside that, something that is great to see being done well in a gritty room like this.

The game ended with a solid but unspectacular finale that nevertheless managed to surprise me in its specific implementation. It’s not often that I miss how we’re going to escape a room, but they’d done a good job to hide it away, and I ended up barking up entirely the wrong tree.

In contrast to the other games we played at Final Escape, Prison Break is decidedly old school. While there is some technology in the room, it’s rare, and the decoration is far more spartan than in its neighbouring rooms. Of course, that’s in part due to the prison theme – which they’ve implemented reasonably well. It may not impress you, but it’s certainly more than adequate to convey the harsh existence you’d expect.

As with many prison break games, this one sees you split into two teams and put into separate cells. In this genre of room, it’s common to be able to see or even reach each other; and, occasionally you may be in physically adjacent rooms. Here, they’ve put in some effort to separate you in a way that makes it not obvious where your teammates are or even exactly how close to you they are. That worked well, not only making it harder to talk but creating a greater sense of isolation. Yes, we could communicate, but it was something both teams had to coordinate – you couldn’t just shout through the wall.

That also led to a relatively slow start for us, which exposes one potential problem. Plenty of communication and teamwork is required in the opening scenes of this game and, if you opt to play with two or three players, then that’s a lot of pressure on the person who is imprisoned on their own. I can well imagine an experienced puzzler getting frustrated at their counterparts for being slow.

As the game progresses, there’s a real sense of exploration. This wasn’t just a case of escaping from our cell to complete the game: they’d managed to pack in a full prison break, which helped lend a sense of adventure to proceedings.

Several of the puzzles were consistent with that realistic sense of escape. This game felt less like solving arbitrary puzzles and more like we were actually working out how to escape from jail. On several occasions during the game, we had to physically interact with the room to complete challenges. Sometimes we had to discover how to do that ourselves, but on other occasions they gave us detailed direction within the room to help us on our way. That’s not to say you won’t have to investigate the game pretty carefully: this is a relatively search-heavy experience so, if you get stuck, it’s worth putting in one extra effort before heading for a clue.

To be honest, the penultimate section of the game felt a little bit stilted, with puzzles that, for our team at least, didn’t flow quite as well as the earlier parts. Fortunately, the final escape was enough to bring the adrenaline levels back up and ensure that we headed out of jail on a high.