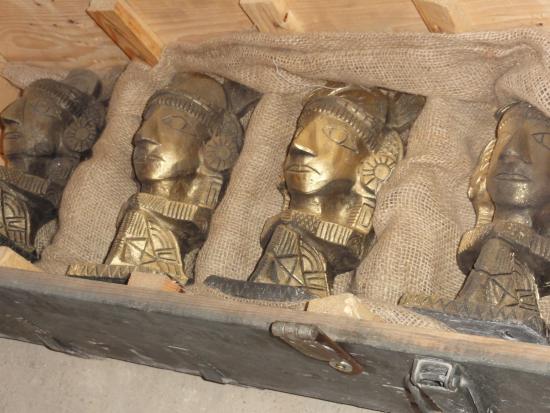 To be honest, we barely saw LogIQ Rooms‘ foyer. We’d made a last-minute decision to go for a cheeky escape room before dinner and were in a bit of a rush. I can tell you that it was reasonably spacious for a two-game venue and that the staff were really helpful – they were willing to rush us into the room and understood that we had to move quickly at the end. Beyond that, I can’t tell you much!

Napuche is one of those games that I’d heard very varying reports about. Those who’d liked it raved about it. Those who didn’t complained of a broken game. One particular point came up again and again, so I’ll say this: If you’re solving a coin-related puzzle, the game is likely not entirely broken but may be frustrating and tedious to complete. I’m pretty sure that it wasn’t originally intended to be that difficult, but I think it’s worth persevering rather than asking for a clue too early. When I saw what was happening, I assumed it would be impossible given what I’d previously heard but, with a bit of effort, we overcame that difficulty and continued along happily.

Visually speaking, it was OK. I’m not entirely sure what theme it was trying to get across – clearly ancient South America at some level (Mayan, I think) – but it was also trying to be suggestive of planning a mission to retrieve the statuettes, and I never really followed the story on that front. Indeed, there was relatively little sense of story in the game and, while there was some sense of mission and progress, it was relatively low key to the point where I never really knew how we were doing.

With four experienced players rushing to complete the game, I didn’t see all the puzzles, but the impression I got was of generally logical challenges, with only one of them feeling like a little bit of a stretch while we were solving it. A couple of physical elements broke things up nicely, although nothing was what I’d call a real skill challenge. The good news is that the challenges were nicely varied and made some use of technology to make magic happen in the experience. I generally find that’s pretty much a necessary element to really bring a temple game to life – most other games can get away with simple padlocks, but not ancient temples. The game came to a close with a finale that, while not particularly exciting, was enjoyable in a way that fitted the game perfectly.

While we didn’t try this game out in Budapest, we have played the equivalent in London. From a quick glance (we were running late!), it looked relatively similar. If you want to read the review of the London game, you can do so here.