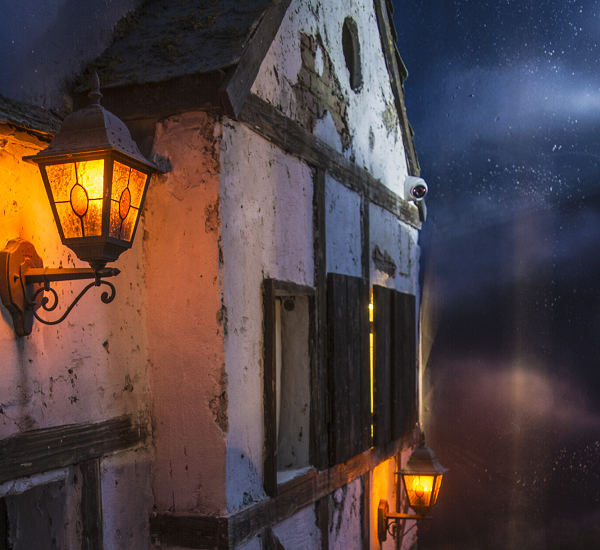 Having visited Mystique eighteen months earlier, I knew they created great games, so I was keen to see what they’d released in the interim. Since that visit, they’d brought out two new experiences – The Towers of Woolongong and Pirate Bay. Sadly, we were just a few weeks too early to play Iron Throne, which they were in the middle of building. Judging by previous experiences, however, I’d recommend trying it out if you’re in the area.

The quick summary is that Pirate Bay is right up there with the best of their experiences (Time Machine) but Towers felt more like a portable escape room – little by way of theme and really just a case of solving (good!) puzzles. Fun but not worth making a detour for.

With four strong games (Pirate Bay, Time Machine, Cathedral and Shogun), you’ve got a real strength in depth at the company, which I think makes it the best venue in Budapest.

Wow. I’d been impressed with the decoration in the three Mystique games I’d played on a previous visit, but this was another step up in terms of looks. First impressions were very, very good, with a set that was both impressive at the grand scale and held up to scrutiny when looking at the details. Not only was the room pretty but there was a very real sense of exploration through the game, discovering new spaces in a way that felt utterly true to life. Even the way you move around the set is interesting, and I was pleased to see that they’d constructed the puzzles in a manner that made full use of that, making us move back and forth regularly between the different spaces. This is a set that deserves to be seen and used as much as possible.

It wasn’t just visual either – the materials they’d used meant that the physicality of the space felt right too, and I was pleased to see that extended to some of the challenges. While you won’t be truly physically challenged, there is effort required at times during the game.

They haven’t let that physical side take anything away from the mental challenge, though, where they’ve put some meaty puzzles in to keep you occupied. A couple of those were right at the upper end of difficulty, but I was pleased to see that there was signposting at various points in the game to help you overcome them. And they were fun – sometimes linking together a couple of stages, and always being logical.

There was just one exception to the above. and that, sadly, was in the final puzzle. It felt far from being fair. Firstly, there was a red herring which you might assume just showed a lack of attention to detail. Fear not: they do worry about the details here. Sadly, so must you, with a critical clue to help you solve the final challenge being hidden so obscurely that, even when we were told, more or less, where it was, we still spent five minutes finding it. Remember: this is a game with an expansive set so, without those hints, I think we’d never have found that final clue.

Overall, this was a really fun game in a beautiful set, but that final long, tedious search meant we ended fatigued rather than on a high. I’d still highly recommend playing, but remember that the final step may prove tough, and don’t be shy about taking a clue before you get too frustrated.

Walking into Woolongong was a disappointment. It’s important that you prepare yourself for that, because it really is a bare experience with a large piece of what looks like IKEA furniture in the middle and then an entire bare room with white walls. As you’re told during the introduction, you can ignore the rest of the space: all that matters is that central device. Yes, it’s technically a device – if you read the story on the website, it talks of a flood in a city but, in truth, I’d recommend just considering it an abstract escape room and getting stuck into the puzzles. The story plays no part in this game.

While there’s nothing by way of theming, they make up for that – at least in part – by presenting the piece of furniture well. A large part of escape rooms is the sense of discovery and exploration, which is obviously lost when you’re focusing in on such a small space. Here, they’ve got an intriguing centrepiece which manages to pack a surprising amount of discovery into a small footprint. Make no mistake: there is an entire room’s worth of content here that will likely challenge you.

Expect to see a good variety of puzzles, including some with physical elements and others with communication requirements. I was impressed with the difficulty level, which felt like it was up on the higher end, although the final puzzle in the game was hard in a way that I found unappealing. It’s the sort of challenge which either you know how to complete or you just end up sitting bashing your head against until you’re either lucky or ask for a clue. The good news is that they have good clues that can help take you a step closer without just giving you the final solution. Regardless of whether you’ve taken one, you’ll finish feeling like you’ve had to solve something right at the end.

All in all, this is a game which delivers well on what it sets out to do. If you don’t mind the lack of theming and the fact that you’re investigating a bunch of puzzles in a large piece of IKEA furniture, then you’ll get a lot of joy from the experience. One word of warning: it’s quite linear and, since all the puzzles are packed into a small space, even with three people we found ourselves treading on each other’s toes. For enthusiasts, even though our team of three escaped in 55 minutes, I’d recommend playing as a pair if possible.

That’s all on Mystique – want to read more about other local games? A link will be added here when the summary article is updated.