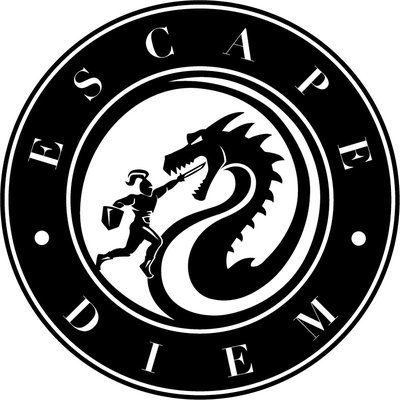 EscapeDiem seems like a small venue tucked in just behind the main station in the centre of Hamburg. At first glance, I wasn’t very excited about the games that were currently available, although the next two they were due to produce looked interesting (both on the website and, in the case of the chapel game which is due out this month, from a quick peek through the door).

It turned out that this venue is all about the detail, and you could see that both in the way they treated their players and in the display cabinet they had outside each room, which was full of – perhaps – the props that hadn’t made the cut. Almost like something between an escape venue and a escape-showroom.

I’d recommend trying the rooms here. We only played one because Jigsaw sounded horror-themed. Had we known what the first one would be like, we’d almost certainly have added it to our itinerary.

While the start of this game seems reasonably simple from a decoration point of view, you start to see the attention to detail immediately. This is a crafted game where everything in the room has clearly been carefully picked to fit their theme. As the experience unfolds, the quality of decoration only improves, and you start to realise just how talented the team at EscapeDiem are. The theming isn’t just used to immerse you: it’s used to take you on a journey.

Yes, this room tells a story, as you investigate the disappearance of the Harbour Master and piece together what may have happened. In addition, when you need help (and we did need a fair bit!), it’s given in the context of the game. Your superior is trying to help you get the investigation done and reminds you, in character, of the sort of mistakes you may have made on previous investigations and definitely wouldn’t want to repeat this time round… Clue systems that are true to world are always a joy to interact with.

The puzzles weren’t plentiful but they sufficed. I found them unusual and sufficiently tricky to keep us occupied. In general they were fair, although one near the end felt like it relied on us digging into their décor a little more than I’d have liked. I can’t quite put my finger on why we struggled so much – perhaps we were just tired at the end of the day and were being careless, or maybe it’s just that the designer’s mind works differently from ours.

My lasting recollection of the game is of it being a charming experience. It may also have told a fun story and had interesting puzzles but, for me, more than anything else it was a game that was just a joy to be in. My advice to you would be to relax, let yourself breathe in the calmness of the experience and enjoy it to its fullest.