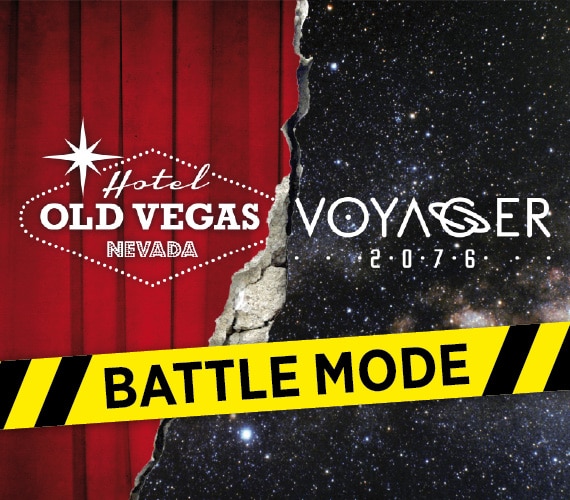 The final venue of our destination was Fluchtweg, a small operator on the edge of the city centre that I’d heard a couple of good reports about. They’ve got two games: one set in a casino and one space-based mission. It’s a small location down a flight of steps from the street, but there’s more than enough waiting area for two teams. In fact, they’ve got two entirely separate waiting areas, which I always think works well: you get to spend time with your team without feeling like you’re interrupting another team’s pre-game discussion.

Before this game even starts, it’s got something about it that’s different from pretty much any other games I’ve played: you have to nominate a team captain who takes on a special role. It wasn’t entirely clear what their special role would be but, as the game progresses, you find there are certain things that only the captain can do. Nothing that truly affects the game, so it’s not a critical decision: just minor interactions. While I liked that quirk in principle, I personally found that it ended up being more of a gimmick than anything else. It didn’t benefit or harm the game. In fact, the only difference it really made was highlighting the fact that we were playing a game rather than having an adventure.

Inside the room, you’re greeted with what I’d describe as very much home-made space station decoration. While it might have been a little bare in places, it got the job done, and the ship’s control panel looked suitably intimidating. The story you get before entering the room is about as much as you’ll find in the game. Don’t expect to find much more, if anything, as you progress through this experience.

It wasn’t a game that felt like it had a lot of puzzles and, with most of them feeling like they had logical solutions, we were left feeling for long periods that we didn’t really know how to continue, and therefore not making much progress. It wasn’t that we were being held up by flawed puzzles (although we were): it was that it was sometimes a little difficult to see where the next puzzle was. I don’t want to be spoon-fed in games, but I felt this could have had just a little more direction for some of the puzzles. On the other hand, I can imagine some teams really enjoying that extra effort.

A couple of things grated about the game. The first was a slightly temperamental input mechanism, with the result that we got the right answer several times but had it rejected. Assuming we’d got the wrong answer, we tried various more outlandish options until we eventually asked for a clue and were told our original solution was correct. Grrr. The second thing was that the solution to one puzzle was a pretty horrible random sequence of words. If that had been an elegant answer, it would have left us with confidence that we were heading in the right direction, but instead we were left trying out the idea with trepidation. Finally, there was a (poorly constructed, in my opinion) colour puzzle that left us scrambling around till we realised the mistake we’d made.

Strangely, they have both a fastest time board and the ability to ask for unlimited clues. We solved the final puzzles less than a minute over the record and knowing that we could have beaten it if we’d used our captain’s abilities properly. Good at escape rooms, bad at following instructions?

In contrast to their other game, Old Vegas Hotel wasn’t much to look at. It’s meant to give the feel of, unsurprisingly, an old Vegas hotel. More specifically, one that’s due to be demolished. In effect, that leaves you with a deliberately rundown space, which is not the most engaging first impression. That being said, it wasn’t flimsy, and there were a couple of big props that looked good in the space. One in particular was a fairly simplistic addition, but it was a detail that most similar games wouldn’t have bothered with.

The story, told to you in the intro video, is that you’ve been caught cheating by the casino owner and are being given this chance to show that you weren’t cheating but were actually smart enough to win on your own. That story didn’t really advance through the experience. In fact, it didn’t even seem to be relevant. You’ve got to escape the room but, once the sixty minutes begin, it’s just about solving the puzzles.

The puzzles were reasonable but felt a little bit trope-y at times. If I had to guess, I’d suggest that this was the original game and Voyager was their sequel. As an example of this, which caused us issues, the room suffered from having various numbers spread around in a way that was just about plausibly a code. We’ve had similar challenges in other rooms where that *has* been the solution, so we persevered for longer than was probably sensible. In the end, there was a reasonably logical explanation but, because we hadn’t had access to that piece of information early on, we didn’t know any better and ended up frustrating ourselves trying various possible combinations. Late in the game, that frustration was compounded by one of the puzzles being ridiculously temperamental. We did the right thing over and over again but it didn’t trigger the correct action.

There was a pleasant balance in puzzle flow here, with two or three on offer most of the time, which meant there was plenty for the team to be getting on with but not so many that it was overwhelming. There wasn’t an obvious finale to the game, though, or at least if there was I don’t remember it. Instead, it felt like it wasn’t until we finished the final puzzle that we realised this was what would open the exit. There certainly wasn’t any big reveal or strong reason for this to be the end to the game.

Once again, we escaped the room just a few seconds outside the record time. Now, I don’t really care about records, nice though they are. Equally, temperamental puzzles are just a fact of life in escape rooms, so that combination didn’t really annoy me, even though it happened in both rooms. What did annoy me was that the games master came up on each occasion and said “oh, if you’d just been a little better, you’d have set the record”. Sigh.