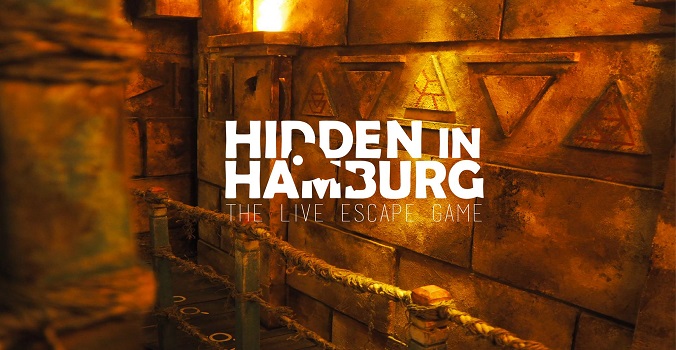 As mentioned in the previous article, Hidden in Hamburg has two venues in the city, both aboard permanently docked ships. In contrast to the original venue, the Captain San Diego (a white ship about ten minutes’ walk east of the Rickmer Rickmers) has three very modern games which could have been built in any location. Note that Google isn’t very accurate with directions, so I highly recommend using the map linked in the summary article and/or leaving plenty of time!

The Captain San Diego is a large ship in comparison to its sister venue and isn’t anything like as pretty. Indeed, the entrance to the games is pretty uninspiring: a couple of floors down some metal stairs into the innards of the vessel. They recover that slightly by having an interesting access to their part of the ship and with impressive decoration in the communal areas – I particularly appreciated the fake rivets with dribbles of rust running down the painted walls. The waiting area is huge – more than enough to accommodate the four teams that might be waiting simultaneously in a way that suggests more games may be planned. Fingers crossed!

I’d strongly recommend all three of the games on the Captain San Diego. They were all exceptionally high quality, with (for me) Master of Time just taking the crown. That may have been because we played it first and had lower expectations, but I think it was probably slightly more engaging for the full team. They’re significant steps up from the other two Hidden in Hamburg games, although I’m led to believe that a new experience is being added to the Rickmer Rickmers in the near future – so you shouldn’t necessarily ignore that ship.

Wow. Right from the moment you enter the game, Master of Time lets you know that it’s a serious game. In fact, the opening puzzle is pretty representative of what you’re going to encounter as you traverse the space – it’s bold, physical, logical and beautifully made, and the whole team can get involved. In most games, that puzzle would have been a centrepiece, but here it was only a little above average compared to the rest of the game.

Throughout the whole experience they managed to engage our entire team. That is incredibly difficult with four experienced players and is an amazing achievement. Almost all the puzzles were structured in a similar way: a reasonably obvious next thing to resolve requiring one of the players to make the connection about what they want you to do, followed by a few tens of seconds of implementing the solution. The result was that, despite this being an almost entirely linear affair, we all got involved pretty much throughout the experience. All too often you’re left watching on from the sidelines for three quarters of the experience as your teammates solve their puzzles. Not here.

It was beautiful too, with a seemingly endless set of spaces in which the puzzles were camouflaged. As well as transitions between spaces, they also had moments of theatre where the lights would dim and the story would be played to the room. Add to that some great mechanisms that underlay either the puzzle input or the resulting action and you had a game that was a delight just to be in. Throughout the whole event, there was just one puzzle that felt frustrating, and even then one of our number managed to spot the important element and solve it.

By the time we got to the ending, we were almost speechless at the quality we’d encountered. True to the rest of the game, they delivered here too with a solid finale that involved the whole team and both finished the quest and rounded off the story nicely. A truly stunning game that would probably be the best in the vast majority of cities…

We’d struck lucky with Master of Time and felt certain that they couldn’t have produced three games of that quality level in quick succession. We shouldn’t have been so certain, though. The Forbidden Game felt very much like they’d decided to reimagine the Jumanji story but with a creepier vibe. You’re stuck inside a slightly demonic board game and have to play to escape. That was highlighted by a clever mechanic that carried you through the whole experience and left you knowing more or less how the game would end.

In a similar way to Master of Time, the room was filled with beautiful sets, impressive props, and puzzles that were logical. The moments of theatre stood out in this game, with each roll of the dice propelling you forward to the rest of the experience. It’s worth highlighting the theatre they injected into those moments. When it was time to move on from each space, they got the whole team together and made us wait with baited breath while they determined the next step forward. That really increased my sense of anticipation.

Where the Master of Time had delivered consistently pretty much throughout, this game had moments of greatness (one slightly creepy one in particular which was delightfully malevolent) but also times when it didn’t quite hit those high notes. Overall, though, it was still a thoroughly enjoyable experience.

It’s worth mentioning that, while the games don’t truly require German, there were two parts of the audio in this one where you did need to understand in order to progress. One required knowledge of numbers, which I’m guessing most teams will be fine with, while on the other occasion our GM stepped in to give us the appropriate translation.

In truth, there’s not much to add to the review of the previous game – this was another high-quality experience that would probably be my favourite game in most European cities.

Same old, same old? The Golden Skull was another stunning game. This one had really taken the sense of exploration and made it central to the experience as we meandered our way around the set to locate the titular skull. As with their other games, they’d gone to town with décor so that we really felt immersed in the environment. To those of you who are familiar with the Crystal Maze, this felt like we were making our way through a smaller version of the Aztec zone.

Again, there were plenty of good puzzles that allowed the whole team to get involved. I particularly approved of a physical one that required a minimum of two people but benefited from a third getting involved and could easily have pulled in the whole team. There were some minor sticking points, but only one puzzle struck me as weak (due to an ambiguous solution).

As with all their games, the finale fitted perfectly, pulling the team together and offering a sense of closure to a game that could easily have been little more than a heist variant. This may be a short review, but that’s mainly because so much of what I wrote in the previous reviews rang true here as well: great theatre, good puzzles, fantastic decoration, a real sense of exploration and a fantastic hour of fun.