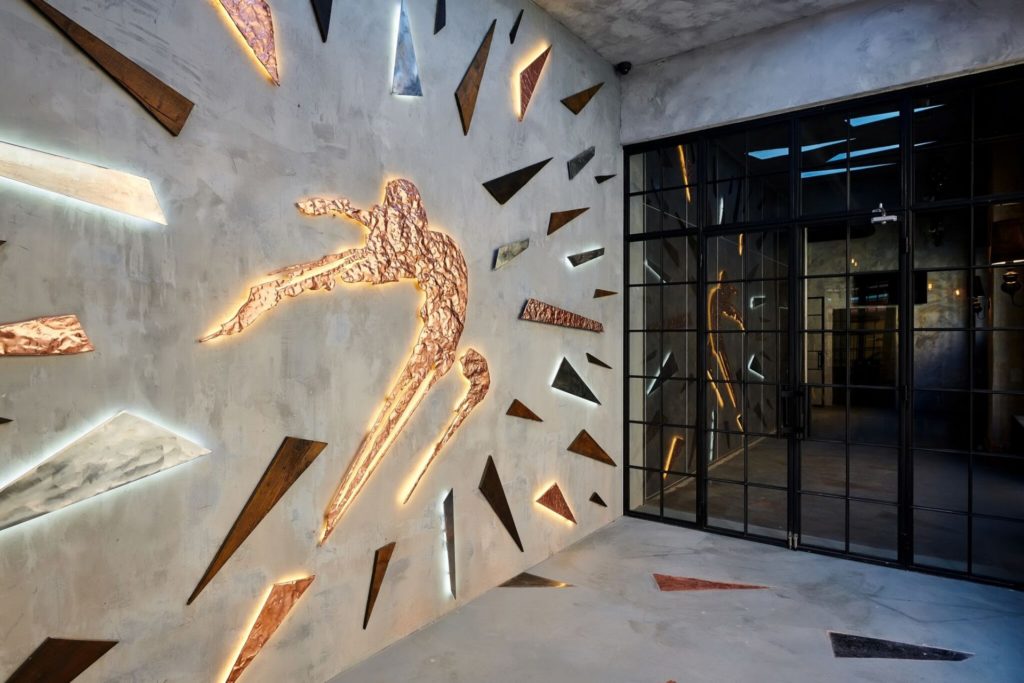 Situated a little outside the city centre, Endorfin is a relatively new venue in Prague which, judging by the website, is very much aiming at the high end of the market. As well as having impressive set designs, they’ve got a spacious, beautiful bar and areas that are clearly geared towards team-building events. That contrasts quite a bit with the venue’s location, which appears to be in the middle of a small industrial area – we really weren’t sure we were in the right place till we were deep inside the complex, so it’s worth checking your directions.

Aside from the impressive set designs, the thing that had attracted me to the venue was Morgue, a single-player game. The opportunity to see how I’d react to playing without the support of teammates appealed to me and, if you’re so inclined, you can go head to head…

There’s no denying the fact that a big attraction of escape rooms to me is that I can have an adventure with friends. The teamwork element is something I see as central to the experience, but I was intrigued as to what a single-player game might feel like. At only half an hour long, it felt like a very manageable introduction and, when I thought about what a morgue-based single-player game might involve, I only became keener to play.

The good news is that this isn’t as cramped as you might think. While claustrophobes are still going to struggle significantly, if you don’t suffer from that fear, I think you’ll be fine whatever your size. The only likely issue is that you will need to be able to climb a little to play the game – nothing horrendous but, if you’ve got mobility issues, you’ll need to talk to the venue about what is required of you.

Decoration-wise, it’s pretty simple but also just right for the theme. There are props, but they’re few and far between. This game isn’t about story or decor, though: it’s about testing yourself mentally; and I didn’t at any time find that the relative minimalism detracted from the experience.

As you’d expect from a thirty-minute experience, it doesn’t have a lot of puzzles, but they’ve made them pleasingly varied. Some are very much on theme, and they seem to have made an effort to make the escape feel natural, although there’s still plenty of escape room logic in there. The thing that I found most appealing was the relative density of physical interactions – some of them relatively strenuous. The one puzzle that frustrated me involved an action that felt genuinely dangerous, and I really wish they hadn’t put it into the game but, in retrospect, it was fairly obvious it was the right thing to do.

That physical exertion helped to make things feel more stressful – the temperature rose perceptibly as I was moving around, which increased the stress in the relatively confined space.  There’s a genuine feeling of escape as you get out of your close confines and make it back to the real world. Add a competitive edge from the player next door, and you’re likely to be rushing out the door at the end. For what it’s worth, I escaped in just over 20 minutes having taken a single clue.

The Morgue isn’t an amazing escape room, but it’s good and it’s definitely unusual, for more than one reason. I’d encourage enthusiasts to play because this is such a rare opportunity to try something a bit different – just think carefully if you suffer from claustrophobia…

Saw is – at least in the context of the theme – a beautiful game. I’ve done more than a few rooms that play around with Saw, and this is easily the best rendition from a visual point of view. They’ve created a place that’s unpleasant to be in, that intimidates you and fills you with the horror of the experience. They split up your team right from the start and then add theatre to the game, increasing each player’s stress in a different way.

Or, at least, that’s what they intend, but we found the opening puzzles were just too tough. When we eventually got help from the GM, we were pretty frustrated, and it was only after several nudges that we understood what to do. It’s pretty rare that we need help early in a game, so to need that much help really makes me feel they’ve got the difficulty levels wrong. Once we knew what to do, I really didn’t feel like we’d ever have got past it without help, and that’s rarer still.

Things improved from there, though, with some more interesting challenges, but all too often it felt like they required a bit of a leap, and we moved forward more often with hope than with confidence. There were certainly some original puzzles in the game, and one in particular stood out as a great idea, although it felt pretty ambiguous and again required a bit of a leap to start.

Given that this is a company that’s brought you a single-player room, perhaps it’s no surprise that they’ve chosen an unusual ending for the game. For me, though, it just didn’t work. You should be able to beat an escape room through skill, with your team rushing out victorious and happy, but it didn’t feel like that at the end of Saw, which took the edge off the victory.

That’s all on Endorfin – want to read more about other local games? A link will be added here when the summary article is published at the end.