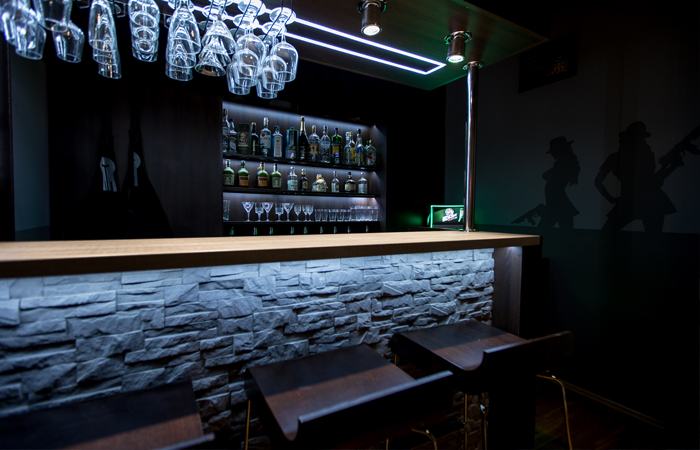 After arriving in Prague on the sleeper train, we headed across the city to our first game at EscapeTheRoom.cz. They have two experiences, of which we’d heard particularly good things about Escape the Bar. As is common with Prague, the game venues aren’t always obvious, either because there’s minimal signage or because they’re in an apartment block which you really don’t expect to house an escape room.

Once inside, there’s a small waiting area where we were welcomed, offered a drink and given our briefing. EscapeTheRoom.cz try to go one step further with immersion – sending you an in-character email before one of their games and adding a little extra to their rooms to break down the barrier between reality and fiction.

In some ways, Professor’s Office is a fairly old-school escape room. The decoration isn’t going to amaze you – as you first walk into the game, you’re presented with a fairly standard apartment and, while there are a few surprises before you finish the room, there’s little that stands out in terms of visuals.

That’s not to say that they haven’t created a strong theme, however. Instead of using the decoration, they’ve used story elements within the experience to help immerse you in the adventure. Before you enter the room, you’re told that the titular character has gone missing, but there’s far more to this game than a simple missing person investigation, with you finding out about the professor’s life and using that information to help progress your inquiry. There was one relatively minor interaction in the game that I found worked particularly well to enhance the immersion. As is so often the case, a small interaction was both disproportionately enjoyable at the time and stands out long after we played the game.

This room definitely rewards the diligent searcher and, while we found everything we needed to, I’m pretty sure on another day there are hides that we wouldn’t have discovered. The puzzles were pretty solid and all logical. There was one moment where we almost fell down because of a tool that we didn’t recognise, though I suspect local Czech players won’t have any such problems.

Professor’s Office is one of those games that stands out not because there’s any part of it that’s amazing but because it consistently delivers a good performance. It may be an old-fashioned room, but there’s a reason it’s standing the test of time.

In contrast with the previous room, there’s an exciting look to this game right from the start. In fact, they’ve paid great attention to making things look visually appealing throughout the experience. It’s not the kind of decoration that will make your jaw drop like, say, an Egyptian tomb or a pirate ship might, but the scene they’ve chosen to create is very well implemented. They’ve kept some of the story element that we saw in their first game too, drip-feeding you information so that you get a feel for the characters, sometimes passively and sometimes more directly through the puzzles.

There’s a sense of progression and exploration to this game that was lacking in the first experience we played. They really conveyed the feeling of trespassing through the space and digging into someone’s life to tell their story. The big standout of this experience, for me, is the theatre within the game. As well as exploring, they’ve included multiple moments where cool stuff happens, and both your plot and goal pivot accordingly.

We enjoyed the variety of puzzles in Escape Bar, although we found ourselves a little lost at times because we really didn’t know what puzzle we were trying to solve. In most games you get a feel for what clues you’ve found and for the challenges that are currently in play, but here there were many puzzles with unusual input mechanisms, which led to a lot more head-scratching. When that worked well, it was great but, on a couple of occasions, it left us frustrated because we were focusing on trying to solve one thing when in fact we’d just missed a key clue for the real puzzle.

The game builds as you explore the set, find out more about the story and eventually head into the finale. Where many games peter out, here they have absolutely nailed the finish, with a clear section of the game where you’ve achieved your objective and are trying to escape, bookended with two pieces of theatre that help raise your adrenaline levels. This is the sort of room where you’re almost bound to burst out of the game on a high.

That’s all on EscapeTheRoom.cz – want to read more about other local games? A link will be added here when the summary article is published at the end.