At the Escape Room Industry Conference 2019, I gave a presentation on data and statistics surrounding escape rooms. One specific element of that was an analysis of the international escape room market, and I thought it would be interesting to share some of the data I collected with a wider audience. Specifically, I compared the number of escape rooms in each country to its population, looking at how things have changed over the last year.

I know you’re here for the pretty picture so, before starting to talk about what it means (and some of the caveats!), here’s the chart comparing the 2018 (grey) and 2019 (blue) rates of rooms across each country: 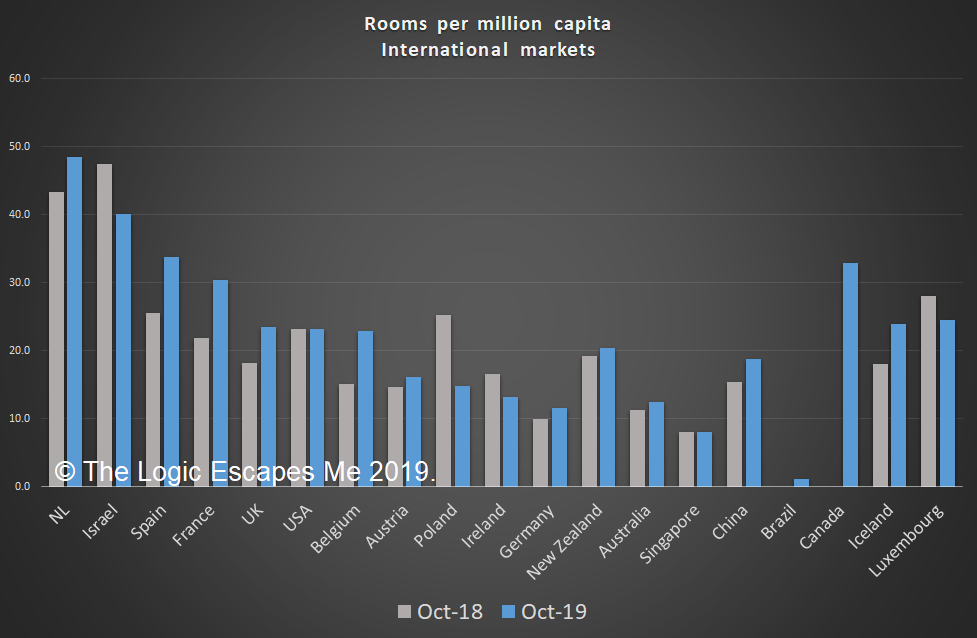 There are lie, damned lies and statistics.

I believe these statistics are good, but they certainly aren’t perfect. They were collected across the space of a few weeks and, even then, they mostly rely on public data from other sites. What counts as an escape room will vary from site to site – does a fifteen-minute game count, does The Crystal Maze count, do outdoor games count? Do you give the same weighting to games in a city like Athens, where many experiences last ninety minutes or longer, as in some parts of Canada, where I believe the norm is three quarters of an hour? The important thing is not to look at the numbers in detail but instead to look at the bigger picture – the trends across the period and the large-scale differences between countries.

The stats are based on the number of games per million people in each country. That seemed as good a way as any of comparing countries of vastly different sizes, but it’s by no means the only option (I could have compared them to the prevalence of cinemas, for example). I haven’t updated the number of people per country – over the one-year period, I don’t think that will be a significant change, although it’s certainly something I should be thinking about in the future.

A couple of other notes: Firstly, the estimates for the US and China are based on venue counts using estimated numbers of venues per company. Secondly, I only have data for Brazil and Canada from this year. I hope to continue collecting this data in the future, so I’m trying to add as many countries as possible. If you have information on the number of games in any given country, please do share it with me!

Well, the biggest thing to say is that, in general, we’re still very much on an upward trend. Yes, some markets have stagnated, or even fallen, but the vast majority have increased. A 20% increase in game count doesn’t seem unusual, and even some of the most densely packed markets – such as the Netherlands, for example – are seeing an increase in the number of rooms.

In fact, it’s worth noting that the Netherlands has taken the lead in games per-capita, with them rapidly approaching one game for every 20,000 people in the country. There are many factors that go into making NL so successful. It’s an affluent country with a good work-life balance, which surely has to help. It’s also a small country with a relatively high population density, so games can likely tap into a larger market. The other key factor for me is that, early on in the industry, Amsterdam produced two high-quality games. I suspect that having those experiences as the industry developed, forced new companies arriving on the scene to have high production values, which in turn meant greater early engagement with players. Furthermore, the small area means those high-quality games have an impact across the whole country.

It’s not all good, though: the US, Poland and Israel have all seen significant closures over the last year, suggesting a change in the market. In the case of the US, that’s been balanced out by the number of openings, but it still highlights that the market is getting tough and weaker businesses are being pushed out. Israel grew very rapidly over the last few years, and escape rooms were well known in the country, having, for example, been the theme of a children’s TV show, so it seems likely that this is just a correction rather than the start of a collapse. I don’t think anyone in either Israel or the US would suggest the market is failing.

The change in Poland’s numbers likely needs no introduction but, in case you weren’t aware, following the death of five teenagers in Koszalin, Poland – and indeed much of Europe – has cracked down on fire safety in escape rooms, with the result that significant numbers of games have been closed. While it’s tempting to think that only the poorest-quality games shut their doors, there were certainly reports of popular games ceasing trading. While most countries performed enhanced safety checks on escape room premises, some also took the opportunity to do a thorough check on other forms of compliance (such as planning permission or accessibility) and, from what I’ve heard, that had a significant effect in both Germany and Austria, which perhaps explains the weaker growth in those two countries compared to most of Europe.

China’s number may be no more than an estimate, but it’s pleasing to see that they’re doing so well, especially if you consider that only half their country is located in cities, with the rest being widely spread across the countryside with minimal access to escape rooms.

How many escape rooms are there in the world?

It’s always annoyed me that media companies worldwide give estimates of the number of escape rooms based on spurious data. It’s not really their fault, though. I don’t think anyone’s ever properly estimated how many games there are, and even if they had, the numbers I most commonly see bandied about seem hopelessly out of date.

It’s hard to be certain – not least because it’s going to be heavily dominated by the numbers in the USA and China, both of which are approximations – but that’s not going to stop me! I’ve done a rough estimate based on the numbers above and approximating the countries where I don’t know the answer based on other similar (nearby) countries, and I’ve come up with a total number of…

Take it with a pinch of salt but, if anything, I think that’s a conservative number. China and the US obviously dominate the market, with a few of the European countries mopping up much of the remainder. That won’t last long, though: new games are opening across the globe all the time and, even if the trend were to settle down in Europe and North America, I fully expect to see continued expansion in South America and Africa.

The vast majority of the work required to write this article is in collecting the raw data. On behalf of myself and so many of the other enthusiasts worldwide, I’d like to thank all those people who spend their time collecting lists of escape rooms for the benefit of the industry and enthusiasts. It’s one of the many things I love about this industry!