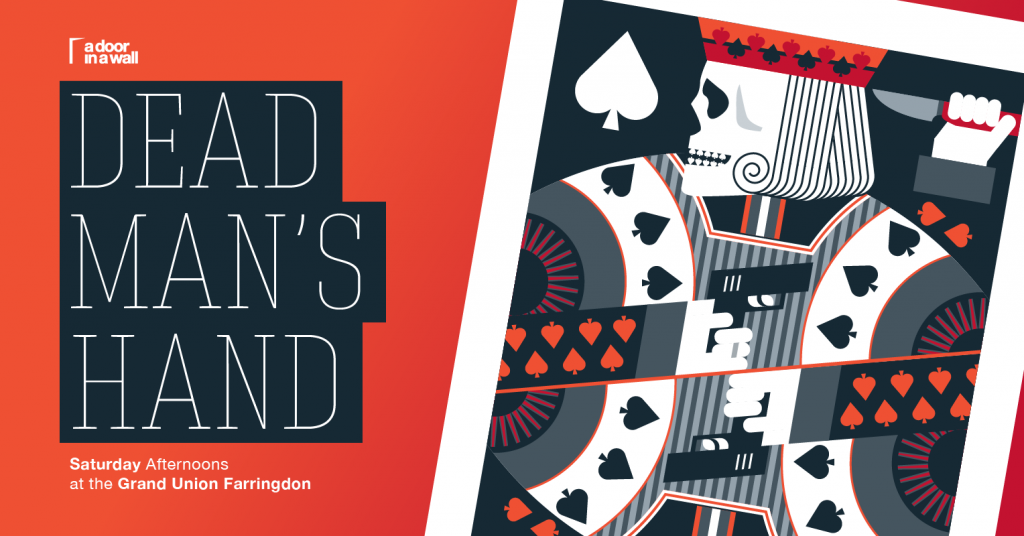 There are few things in the calendar that I look forward to as much as A Door in a Wall, so I was excited to see that, soon after the untimely demise of Dead Drop, they were resurrecting a game they’d developed before I’d even heard of them. Dead Man’s Hand would see them updating the original experience with some of the technology and ideas they’d developed in the intervening period while retaining the central plot of the original game.

Once again, they’ve opted to make it a weekly game, this time available on Saturdays in and around Farringdon. While I enjoy the flexibility of being able to choose the day/time I want to play, I think this works better by allowing people to plan much further in advance (and presumably allowing A Door in a Wall to develop their next game when demand for this one starts to wane… if it ever does).

It’s the classic format for their shows – an opening piece of theatre, exploration around the local area, interactions with a few characters, a half hour to an hour of talking over your answers with your teammates, and then the final wrap-up where you get to find out what really happened and how well you did.

As usual, we headed out to explore the area, and I was impressed by the puzzles they’d managed to pull together, which made good use of the local scene to hide and decode information. I really enjoyed a music-themed puzzle they’d created and another that invited us to look in detail at a piece of artwork that I have probably walked past on many occasions without even noticing it.

It felt like there were slightly fewer character interactions than previously – and at least one of them was a bit weak – but overall they still had the humour that we’ve come to expect from this group. One in particular was beautifully ad-libbed in a surprisingly aggressive (but not intimidating) way. Usually, you get to the information you need pretty quickly even if you play your part badly but, this time round, the actor played with us far more, and I liked that we couldn’t get away with weak stories.

We saw two negatives in the game, both of which I suspect will have been solved by now. The first was a particular set of interactions/puzzles which caused a huge queue to form. Considering there were around 12 teams taking part when we played, to have five of them queuing in the same place suggests they’ve got something wrong. We were fortunate enough to be one of the first to show up, and you obviously always have the murder mystery to be thinking about, but it felt like it could have been handled better.

The second was related to the finale, where there was a puzzle that was solved by all the teams working together after the game was over. It was a shame because I’d really enjoyed the wrap-up and then it added on a couple of minutes of confusion at the end which made the game peter out somewhat. Otherwise, the ending was good – there was a nice storyline that pulled everything together, and we spent a good half hour discussing the ins and outs of the case before submitting our not-quite-perfect answer. The detective returned and talked the audience through the story so that those teams who hadn’t got their answers right had one final chance to spot any mistakes before we were told what had happened.

We hit a couple of rough edges, most likely because we played early on in their cycle, but we still had a great time. As A Door in a Wall games go, it felt slightly weaker than average, but you have to remember that that would be first rate by any other company’s standards. Book your tickets, head down to Farringdon and see how the cards fall…