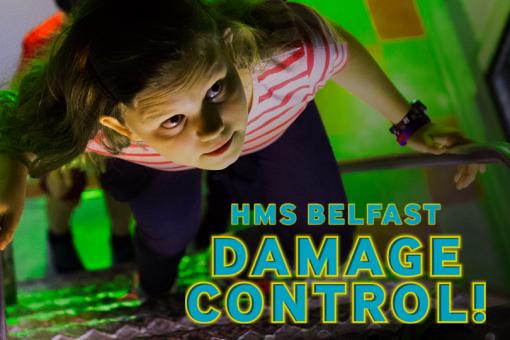 Clockwork Dog come with a stellar reputation, particularly considering the fact that they focus on pop-up games. Their first game was well received; and their second offering, Loop, got rave reviews from every London reviewer and was then bought by the Panic Room in Gravesend. Since then, they’ve created a bunch of stuff, not least a short-lived game to advertise Tomb Raider which was an audacious masterpiece.

This time round, it’s a little more sedate with Damage Control, a family-friendly half-hour game aboard the museum ship HMS Belfast. It’s worth mentioning that, while the game costs £69 for half an hour, it includes entry to the museum. You’d be paying £39 for a family of two adults and two children for the museum admission alone so,  if you want to enter the ship as a group of six adults, it’s actually about twenty pounds cheaper to book the game than to buy the adult tickets in the normal way! And, if you do want to visit the museum, I highly recommend grabbing some of the free audio guides. Otherwise, there’s relatively little context to the scenes you’ll see aboard the vessel.

You need to make your way to a particular location on the ship ten minutes before your scheduled time. That’s easy to find from the entrance (it’s well signposted) but, should you wish to explore first, make sure you leave plenty of time to get back to the right place – the ship can be a little labyrinthine at times.

Your GM greets you at the meeting point and then takes you down a ladder to the private space on the floor below. It’s pretty cool, because you get taken to a place that other visitors can’t access and then get a mini history lesson from your GM before heading along to the game room.

You’ve hit a mine. This is not a drill. You’re plunged into darkness. Do you have what it takes to save HMS Belfast?

In some ways, this game is perfectly themed – could you do any better than being aboard the HMS Belfast? At the same time, that means you’re inside a big metal space  with a really industrial feel to it and little by way of conventional decoration. I guess there isn’t a huge amount they can do to modify the structure of the room or significantly dress it up. There’s a large centrepiece and a couple of posters hung up, but that’s about it.

A half-hour room is never going to have a lot of content. And it’s not as simple as saying that it’s half as many puzzles as usual because, with most players being first-timers, there needs to be a gradual ramp-up during your game. The fact that it’s also targeted at families means that some of those puzzles have to be even easier than usual. There’s a reasonable amount to do given that context, but enthusiasts should go in with their eyes open – this game is not going to take much time or tax them heavily.

The structure of the experience was clear from early on, which gave a good sense of progress. At times, I definitely felt it veered towards the instructional. Usually, it was trivial to know which puzzle to solve and how to solve it – the only real challenge came from using the controls correctly. Mrs Logic found that frustrating, while I found it a little tedious, particularly when trying to get the whole family involved.

Almost everything revolved around the centrepiece, where they’d packed in plenty of technology to provide some interesting and unexpected reveals. But this game isn’t all puzzles: there is a small amount of searching to be done, which was surprisingly fun, partly because there was some level of direction and partly because they were largish items. More than anything, though, I think it was because it got us away from that centrepiece. Usually, I love something big and chunky that forms a central part to the game, but here it was a bit too central and, in spite of it having plenty of physical interaction, I was left with a feeling of having played a computer game albeit with interesting controls.

Without a doubt, where this game comes into its own is in taking a story and making it into an escape room. As an educational experience, it’s good, creating a mission out of a genuine event from the ship’s history and converting it into a series of challenges designed to mirror the real emergencies that would have been experienced on board. Indeed, my favourite puzzle required you to make decisions that a crew member would have had to make in the real-life emergency and helped you understand the impact of those decisions.

There’s a fun, hands-on finale that gets the team pulling together to finally get the ship to safety.

They don’t focus on time, but I’d guess we took around twenty minutes. We received a single clue when we started trying to solve one puzzle before the previous one was fully complete.

To be honest, coming out of this game I felt disappointed, but I don’t know if that’s really fair. Clockwork Dog have a great reputation, but creating a game in the confines of a ship that takes under half an hour and is suitable for children was always a tough ask, and their brief wouldn’t – and shouldn’t – have been to entertain enthusiasts. Overall, though, I still feel there was a distinct lack of thinking required by players. That, combined with the focus on the centrepiece and a relative dearth of searching, took away the sense of discovery that makes me such a fan of escape rooms.

That said, if you’re interested in visiting the HMS Belfast, it’s still a fun game and reasonable value, although I wouldn’t take more than four players. While the game is very playable as a two or three, given that you get free museum entry, it seems the optimal choice would be to take along a team of four and accept that you won’t be quite as engaged in the game as you could be.