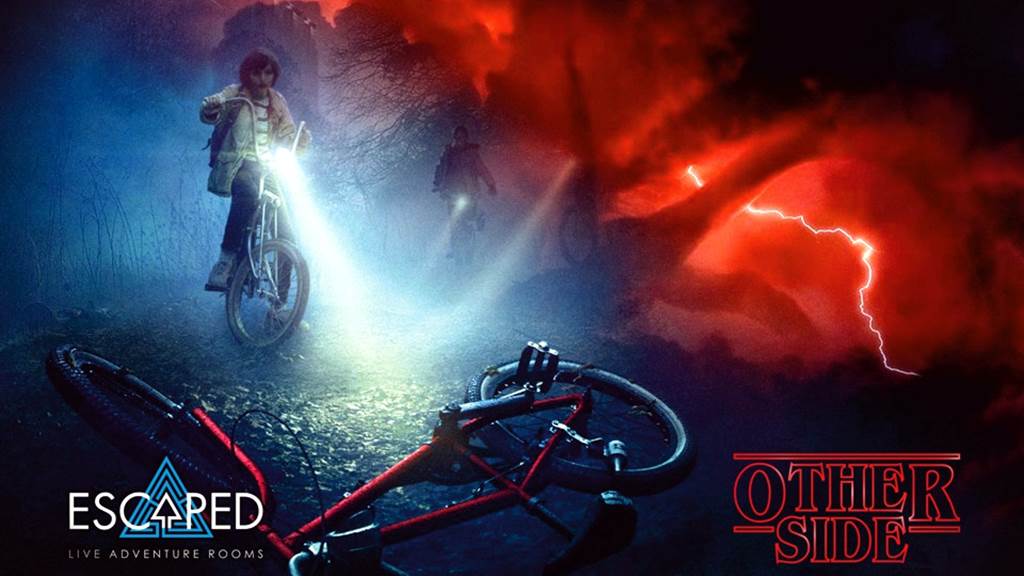 With two separate sites and around ten games to play, Escaped is one of the bigger Athens companies. We’d wanted to play a couple of their games while in the city, but Zygote had unfortunately closed just before we’d arrived, so we’d just booked in for their eighty-minute Otherside game. I’ve never watched Stranger Things, on which the experience is based, but I can confirm that this didn’t stop it from being plenty of fun. It’s possible that spotting the references would make it even better, but not knowing details from the show certainly didn’t detract from it.

Things start off in a reasonably gentle manner, with a few simple puzzles and a set that looks good but isn’t particularly exciting. This game is all about the Otherside, though, and it was the transition to playing in this parallel reality that really impressed me. They’ve done a great job of setting that up by building tension into the game flow, bringing all the team together and then making a series of small changes to help give you the impression of an altered reality. Sometimes it’s massive effects that sell a world but, at other times, it’s the attention to detail; and in this case that worked incredibly well here.

That’s not the only impressive transition, however. Throughout the game they produced a series of fun ways of moving between spaces and, like in many Athens rooms, there’s plenty of space for you to move through. If anything, this is slightly more compact than average but, rather than spreading out, they’ve been very efficient with their game, creating smaller spaces packed with stuff through which you move relatively rapidly.

They haven’t skimped on decoration, though. There’s plenty of pretty imagery to engage you, and I was impressed by the variety on offer. I can’t say I really followed the story closely, immersing myself in the puzzles instead, so at times it did feel like we were jumping from one random location to another, but it was always enjoyable to see what would come next.

That was partly because the puzzles were logical and enjoyable. Some were simple, some were quite tough but, aside from one challenge early in the game, they never held us up for long, and it was always clear when we’d got the right answer. We found the opening to the game to be a little contained, with us treading on each other’s toes at the start, but that quickly calmed down and we found ourselves with much more open play where we could usually work on challenges in parallel.

If I had to level criticism at the game, it’s that the final escape isn’t the most memorable in the world. Instead, the final few puzzles are what stick in my mind… which is no bad thing either!

The Otherside takes a popular theme and translates it into a thoroughly enjoyable escape room. There’s an incredible sense of exploration, a cool set with some amazing transitions, good decoration and enjoyable puzzles. This is one of those games which is strong in virtually every department and so delivers an experience that’s hard to fault.

We played as a four and escaped comfortably, but it did feel like we were playing reasonably well, so I wouldn’t opt for a smaller team and, with the parallelisation, I think there’s plenty to keep people engaged.