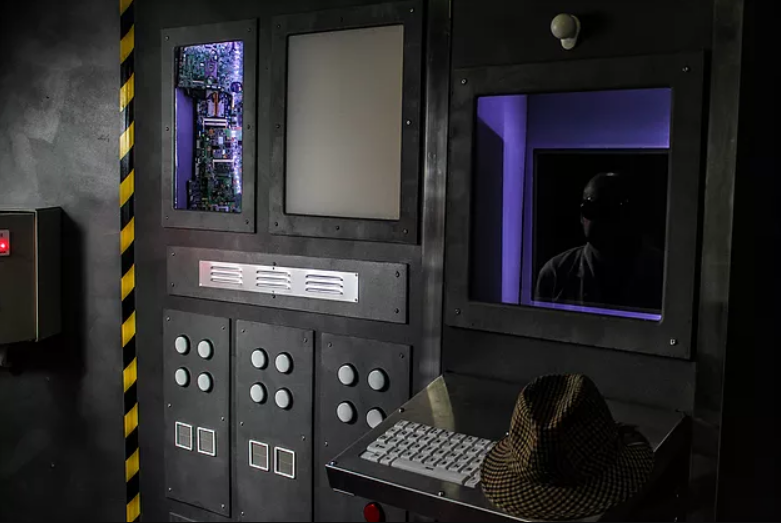 Experimental Escape gives the impression of being a scientific escape room – at least based on the website, which talks about getting participants to take part in experiments and whose stories have a high-tech theme. It’s therefore not much of a surprise that you’re greeted by someone in a lab coat when you arrive. It’s a small but welcome touch to help begin the process of immersing you in the game world.

For now there’s just the single game, The Machine, but they’ve got plans to open up several more rooms in the future. While there’s ample space for teams to wait, they’ve sensibly put up a temporary separation between the area they’re using and the larger space available. In the past, I’ve been to places whose big expansion plans means they have a huge empty waiting area that can feel imposing and impersonal. The experience here was the exact opposite: warm and welcoming.

A quick intro to escape rooms, a backstory for the game, and we were soon heading inside.

The Machine was created in an attempt to be at the forefront of Artificial Intelligence but appears to be an absolute failure. Ever since the mysterious disappearance of the Professor that was the mastermind of its creation, The Machine has remained dormant. We have decided to open up our doors to the public to cast fresh eyes on the experiment. Can you determine what went wrong and restore communication in under 60 minutes?

The Machine is an unusual room in that it straddles the line between traditional experiences and more tech-driven games, with a foot firmly in each camp. Sometimes, you’re dealing with fairly old-school puzzles and simple padlock solutions while, at other times, you’ve got high-tech puzzles and input systems. That applies to the decoration too: in places it looks like a traditional office game, put together on a relatively limited budget, while elsewhere you have high-tech toys to play with. Fortunately, the eponymous machine is more than adequate to provide a focus for the game.

This is a mission-based game, with that mission becoming clearer as the game unfolds. Along the way, though, you’ll find out a little more about the situation you find yourself in, including a few moments of humour mixed in to lighten the tone and add to the narrative. I’m ashamed to say that we totally glossed over a couple of things in the space which were hinting at what had happened. I won’t give away any spoilers, but I will say that there are items in the room that aren’t there just to help you solve puzzles (although they will) but also to give you a hint as to the backstory.

The puzzles in this room were solid and had good logical solutions although, as with the decoration, I found a couple of them (particularly early in the game) to be a bit simplistic, especially with one concept that was used on two separate occasions. There’s some simple searching early on, which should help everyone feel involved, even in larger teams.

Interacting with the machine was my favourite part of this game, and I was particularly impressed by the way they had created a group of puzzles that built on each other. In effect, they trained the players in how the game worked, allowing them to complete more difficult – and hence more rewarding – challenges as the game progressed. That chimed with another positive aspect of the experience: consistently good user feedback. With high-tech games, you’re often left wondering whether you’ve done the right thing. Throughout this one, however, we were always certain when we had done something right (or, conversely, when we’d done something wrong…). Interestingly, solving the puzzle was sometimes only half the battle, and inputting the answer was a secondary challenge. Again, that worked well to include a larger number of players in each step of the game.

As we progressed, the puzzles felt more and more in sync with the theme. That was absolutely true of the finale, but there was so much more to it than that: humour, theatrics and a real rush of adrenaline to finish things off. You’ll be racing out the door when the game is over, which is exactly how things should be.

Our team of two escaped in around thirty-five minutes with a single clue that took us back to a puzzle we’d skipped by brute-forcing the final dial in a combination lock. Clues are given via the computer’s AI system.

The Machine is a fun game that, in spite of starting off in a slightly pedestrian manner, continues to improve throughout and is well into its stride for the finale. A few of the early puzzles felt like filler, but the majority of challenges were plenty of fun, and there was good player feedback throughout.

This was a great game for a pair of enthusiasts. While there’s enough space for a much larger group, I think I’d stick to a maximum of four. Beyond that, some players won’t be as involved, and I think the linearity of the finale will reduce the engagement of the participants.