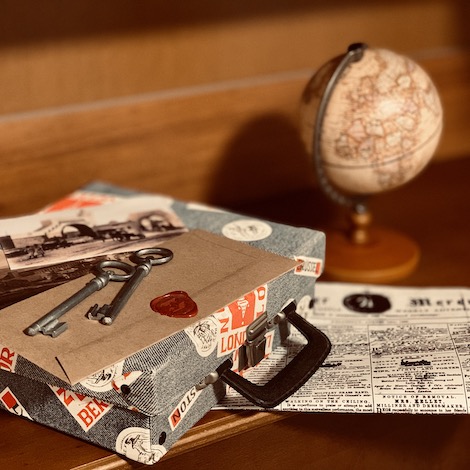 HintHunt was the first venue to open in the UK and, while they may have dominated the market early on, they seemed to take a back seat, with no new games opening, for a long time. After almost five years in the wilderness, though, they seem to have woken up over the last twelve months and brought four new games to the London market. They’re still in their original venue (more or less), so it’s worth reiterating that you definitely don’t want to be turning up early – and certainly not on a rainy day – or you’ll be standing outside while you wait for the previous team to finish. Admittedly, they were ready a little ahead of time in our case, but it’s not the warmest of welcomes, especially if you have to travel to get to the venue.

First impressions inside the room were good. Although it’s just an office environment, it’s a very well presented one, without the typical look and feel that gives that theme such a bad name in the enthusiast community. We’d barely had time for a first impression, though, before we had to come back out of the room for a reset error to be fixed. It didn’t affect the game much, and they did offer a small discount afterwards to apologise, but it showed a lack of attention to detail that was surprising and, critically, it took them a few minutes of us getting confused over a puzzle before they noticed what was a fairly obvious missing element in the room.

When it comes to the backdrop to this game, I’d describe it as solid. There’s enough story to get by but nothing earth-shattering. The office was well decorated but didn’t really immerse me in the world. There was enough sense of exploration to keep me interested but not to truly excite. First-timer players will be impressed. Experienced enthusiasts will likely just find it does the job well.

The strength of this game, for me, was the puzzle-solving. We really enjoyed the challenges we had to overcome and how they often made us discuss the solution. They’d packed in plenty of puzzle styles, so I think most people will be happy. There was also some fun signposting during the game where they hinted nicely at what props might be involved with puzzles and what kind of puzzles we might need to solve. As experienced enthusiasts, most of those were obvious, but it helped to cement in my mind that the room made sense. We weren’t just solving puzzles because we’d seen something before: there was almost always something hinting that that was the right thing to do, even if we only noticed after we’d got the solution.

One tip I’d give to players is this: While the user feedback when we’d solved a puzzle was usually good, there were a couple of occasions where we didn’t notice what had happened. Some of those were perhaps deliberate – forcing you to be observant – but I think some were mistakes. One, in particular, was because we’d put an item down on top of what we later realised was a lid. Be careful where you put stuff and, if you think you’ve solved a puzzle, remove props to check!

The final two puzzles in the game produced both highlights and lowlights for me. One brought multiple puzzles that had come before into a final challenge. There was just enough signposting to tell you what to do and provide a couple of aha moments on the way. Unfortunately, there was also some ambiguity in the orientation of a particular item which made us struggle with what was basically the correct solution. The very last puzzle felt like the weakest in the space, with a tenuous link to solve it. You may get it straightaway, but I think most teams will ask for a clue. That’s a shame because, in spite of the many very solid puzzles that came before, my final memory will be of that weaker challenge.

It may not be the most elaborate of themes, but HintHunt deliver it well. With some of the stronger puzzles I’ve come across in London games and solidity in most other areas, this is definitely a game I’d recommend for enthusiasts in the capital, especially those that value puzzles as much as immersion.

Our team of three escaped the room in 45 minutes having taken a single clue (well, two if you count the one for having stopped a mechanism opening by putting props on top of it…). For enthusiasts, I think that’s a good team size, but I’d be happy to take along a group of four.