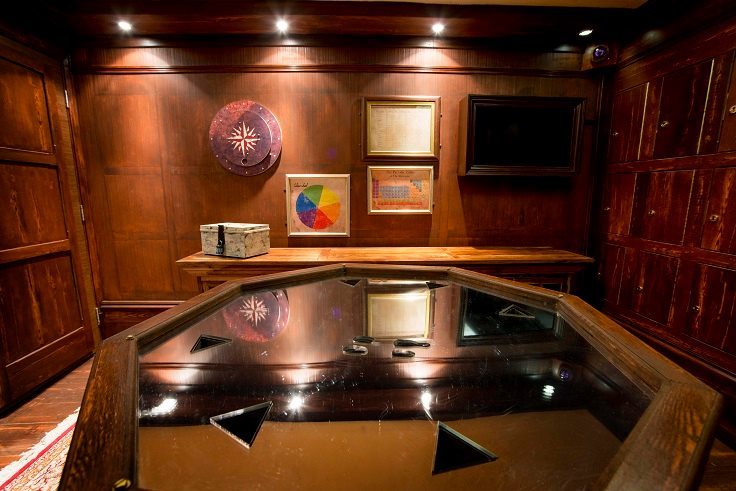 There’s been quite a buzz around the opening of Secrets of South Lodge, with rumours of a high-quality set and a strong experience, so it was a natural finishing point for a New Year’s Eve tour of the Yorkshire area.

Of all the games I’ve played, this is probably the easiest to find. Head along the A1(M) until you reach J45, and it’s situated in the middle of the roundabout. Yes, really. It actually worked very well – this is an activity where arriving at a grand house is a good thing but the noise of the motorway isn’t a big deal because you’re going to be trapped inside the room while you’re playing. The proximity to that major trunk route also makes it a perfect break on your way to the North East of England.

The inside is massive, with plenty of space to wait and some interesting African curiosities surrounding the seating area for you to admire if you turn up a little early.

Sir Henry’s travels across Africa took him to places and peoples no outsider had ever seen before. He went in search of precious metals and gemstones, but unearthed a secret riches could never buy.

Sir Henry’s oak-panelled study will set you on the path of discovery. Can you re-trace his steps to learn one of the Secrets of South Lodge?

First impressions aren’t everything, but they most definitely count. As soon as we saw the interior of the game, I realised why it had such an impressive reputation. It’s a beautifully decorated room with an old-world feel – full of dark wood and brass fittings. It’s clear that a lot of work has gone into making a gorgeous set that’s a joy to be in.

There’s also an intriguing centrepiece that contrasts with the oak-panelling of the rest of the space. To some extent, that’s a constant theme in this game: different elements in the decoration giving a very different vibe.

The game itself doesn’t have an amazingly strong story. You’ve got to find out one of the secrets of South Lodge and, beyond that, the narrative for what you’re doing is pretty vague. That’s not to say there isn’t a narrative element here. Many of the puzzles have fairly significant chunks of writing that help to tell Sir Henry’s story and, while that didn’t explain why we were doing what we were doing, it did add some extra colour to the experience.

This is a relatively low-tech game in some ways, and with that comes the risk of having to try keys or combinations in lock after lock, so I was particularly impressed that their opening set of puzzles avoided that issue. At times, I think they’d gone a little over the top with the background in those first puzzles or, rather, I found the continued use of a particular puzzle style a little dull. There’s only so often I want to skim through a letter or parchment to extract a key piece of data rather than tackle a more concrete puzzle.

The puzzles were pretty parallelisable too, with several available to work on at once, but it quickly became much more linear and hence led to us sometimes getting in each other’s way.

All the puzzles made sense and, as we ticked the early ones off, they made use of the centrepiece to give an indication of how well we were doing. Once that was complete, though, I started to find myself a little lost in terms of how far we had to go. Games don’t have to telegraph that information, but I do find that it helps improve the experience: Should I rush to finish because time is running out or take it easy and maximise my enjoyment?

The finale is obvious from pretty much the moment you cross the threshold, which gives a great sense of anticipation to the ending. I’d have liked to see something a little more theatrical when that final act took place, but it was very much an enjoyable ending to a fun game.

We escaped in just over thirty minutes having taken a single clue for a failure on a tough search. Clues came over a screen in the room. It’s a minor detail, but the font used felt very computer-y compared to what I would expect, and that grated with me far more than I’d have anticipated – breaking the immersion slightly in a way that screens usually manage to avoid.

This was a beautiful room which was fun to be in and had solid – albeit similarly styled – puzzles. The difficulty level is relatively low, so it’s the perfect game for beginners to head along to and, with a relatively linear finish, it’s very much a team ending.

I’d recommend two or three enthusiasts at most so that you get to experience as much of the game as possible. Beginners will probably want to opt for 4+ but could probably get by fine with just three.