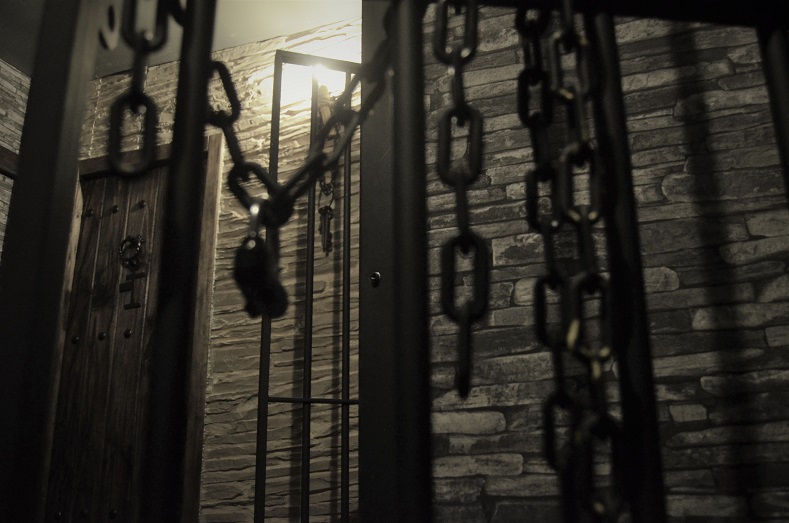 Top ranked on TripAdvisor and with five games, we were always going to head to La Casa de las Habitaciones for at least one room. We’d chosen Dungeons and Druids, one of three experiences they recommend for children. The venue is split across two adjacent buildings, so make sure to check the doorbell to make sure you’re at the right one. Like many Spanish games, they only staff the venue when there’s a game on, so turning up more than around ten minutes early is likely to see the door go unanswered.

It’s a split-start room, which always adds some tension to the opening of a game and, while I liked the initial puzzle, I felt it was a tough introduction to escape rooms. Not a problem for enthusiasts (although we did take a clue), but likely to leave first-timers struggling. Once the game opened up, though, we had plenty of fun. There are some chunky puzzles to get stuck into and some that see you bouncing back and forth across the space. There’s a wide variety of puzzle types on offer, with a particularly complex implementation of a fairly standard type and another that made good use of the druid theme to carry you towards the end of the experience.

There’s good decoration throughout which, while not portraying Scotland from 2000 years ago, certainly carried some sort of centuries-old vibe with pagan overtones. Yes, there are keys and combination locks, but not so many as to get in the way of the immersion. The finale to the game was slightly disappointing, and your final memories of the room are likely to be of a fairly bare space. Admittedly, that was exacerbated for us by being overly careful with one of the props and so spending longer there than we should have, but I still think some stone wallpaper or similar would have worked wonders to retain that theme right to the finish.

There’s a slightly unusual scoring system to this game, with you having to collect eight mana tokens and a couple of artefacts in addition to escaping the room. The mana tokens are all optional (although you’d have to be pretty careless not to find at least half of them), while the two artefacts are mandatory (as, of course, is escaping the room!). Each mana token results in 300 points, except for the Time mana, which is worth 400. You can ask for an extra clue, at the cost of a mana token, at any time, while the Time mana can be converted to an extra three minutes at the end of the game. Your final score is bumped up by 10 points for each remaining minute. I did say it was an unusual system! We finished with 2660 points by collecting all the mana tokens and having 16 minutes left.

Despite that intricate scoring system and emphasis on searching, we had a lot of fun. The opening puzzle may be hard for a split-start room and the finale slightly soft but, in between, you’ll find a well decorated room with solid puzzles and a couple of particularly enjoyable elements.