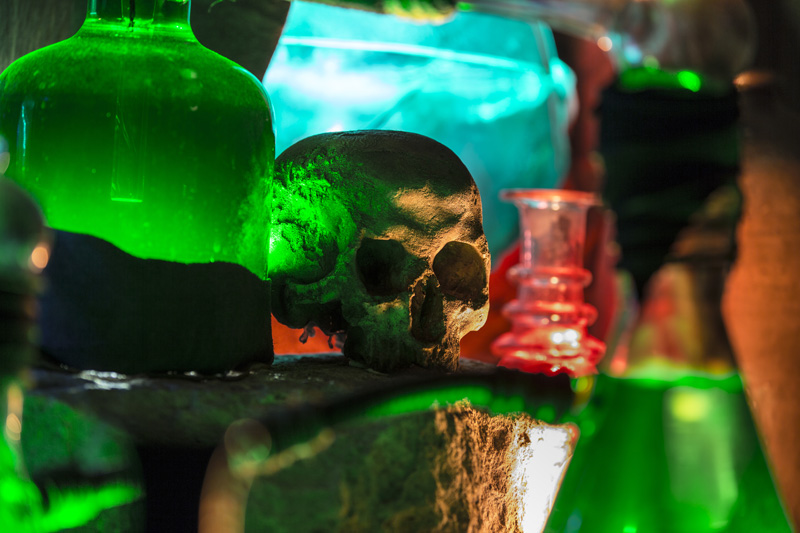 Set in a basement underneath a main shopping street, Elixir Mystery is the most central of the Prague escape rooms we played, which makes it the perfect game if you want to take a short time out from conventional tourism to experience something a bit different without having to travel. I say conventional tourism because this game is most definitely aimed at tourists, with an introduction that talks about the history of the building and Prague and a set that backs that up. Most games feel like they could be picked up and put down in another city and, while the core game here isn’t particularly rooted in Prague culture, there are plenty of references layered on top.

This game has a tough start, where I suspect many beginners will struggle to make progress. In fact, the same was true for us as experienced players. The good news is that it’s also a cool space to be in, so I didn’t get frustrated while we investigated everything we could find. Eventually we started to make connections and progress through the game. More than most, though, this felt like a game that stopped and started. There weren’t many quick wins and, combined with what was an impressively big set, we often found ourselves wandering the space trying to work out which direction we were meant to be heading in.

That impressively big set has a correspondingly large number of props, which at times felt like they were getting in the way of the game rather than adding to it. In retrospect, though, the things that looked like clues were, and the things that didn’t weren’t, so trust your instincts and I think you’ll be fine. What’s really pleasing is that it felt authentic: the props felt old, many were made from wood and, together with the stone walls, they really helped to make this game a satisfying place to spend time in.

The puzzles were good too. They may not always have been easily accessible, but neither were they illogical. If you like puzzles at the harder end of the spectrum, then you’ll be happy here. It wasn’t just a mental game, though: one physical challenge really wowed us and, while it wasn’t amazingly difficult and it bottlenecked the group, I think it’s a great addition that makes this game stand out from the crowd.

The finale was a good contrast with the rest of the experience, feeling compressed where the rest of the game had been quite open and airy. Partly due to the way the game is laid out, the finale feels very separate from the rest of the experience, which helped with immersion. When we finally reached it, it felt almost jarring because there was no warning that we’d almost got to the end of the room. That meant we were robbed of the usual anticipation and consequential excitement of knowing that we’d almost completed the game. It felt like there should have been a few small puzzles to take us over the finishing line but, instead, there was a single challenge that we agonised over because the only solution we could see was just too simplistic. That turned out to be the correct answer, though, and we were soon rushing out the door with the elixir firmly in hand.

This was a good game, with enjoyable and harder-than-average puzzles. Its location in the heart of the city, the impressive introduction, the thematic venue and a visually impressive finale made it stand out from the crowd. If you fancy a game that you can almost justify as tourism, then this is a great addition to your visit.

We played as a three, which worked well – we had around ten or fifteen minutes to spare from our seventy-minute game. There’s plenty of space, and the puzzles are harder than average, so taking along a group of four would work well, but be warned that there are a couple of bottlenecks where players may feel like they’re watching rather than playing.

That’s all on Elixir Mystery – want to read more about other local games? A link will be added here when the summary article is published at the end.