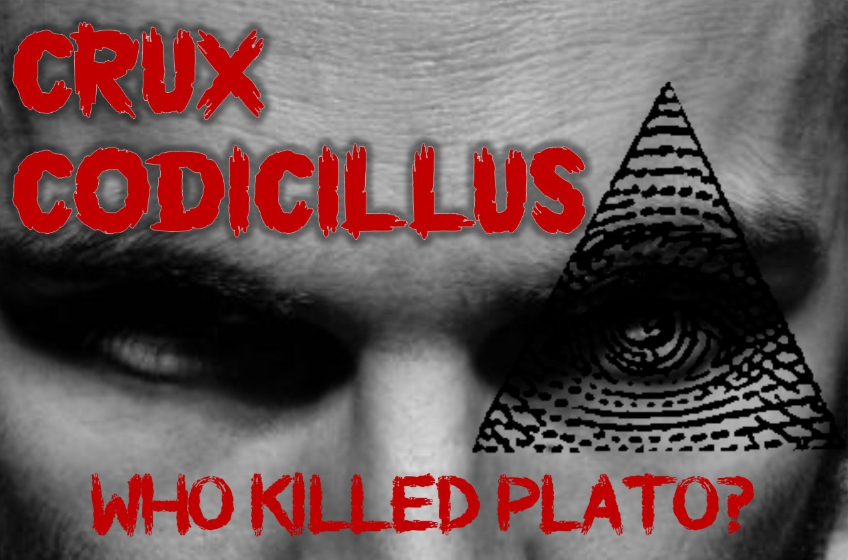 The Escaporium has a strong reputation amongst enthusiasts for delivering enjoyable escape rooms and, after hearing particularly good things about their third game, I was determined to make a slight detour to fit it into our itinerary. Crux Codicillus is an Illuminati-themed game that takes place in their Piece Hall venue. That seemed fitting, because a room with that theme belongs in a grand old building steeped in history. It’s not as big a waiting area as their other venue but, with briefings taking place inside the room, that wasn’t a problem.

I’m not a fan of video introductions inside the room, primarily because it’s very hard to maintain your focus on them when there are interesting things to look at. That was particularly tough in this case, because there are plenty of curios around the room to grab your interest. Fortunately, they’ve made an engaging video which kicks off the room well. I’m still a little torn about their inclusion of humour, which I generally really like to see in escape rooms but here found that it took something away from what was otherwise – both in the video and in the room – a fairly serious game.

As you’d expect if you’ve played their earlier games, they’ve created a pretty set that manages to convey the theme well (in my case, despite not really having a clear view of what an Illuminati theme should look like). In some sense it’s just a period study, but they’ve added a level of opulence and quality throughout that raise it to a higher level. This isn’t just about them taking old pieces of furniture and putting them in the room. The props and general layout of the game all echo that style.

Surprisingly given the theme, this is a murder mystery game with a Cluedo-style mission where you have to work out who committed a murder, what weapon they used and where they were from. There’s a little bit more to the story as the game progresses, but the mission they’ve provided is more than enough to give a real sense of progression and purpose to the game. I felt constantly drawn forward.

While that structure was a real strength, I found that the balance of it was also the game’s biggest weakness. Sometimes, we received information very slowly – perhaps solving multiple puzzles for just a small piece of information. At other times, it felt like we were able to rule out lots of aspects of the mystery for a simple solve, which left me feeling almost undeserving of the sudden progress. I’m left wondering whether they’d had to remove some puzzles from the game and, while it didn’t do much damage to the experience, I think a better balance here would have maximised the enjoyment.

The room may look good, but it’s in the puzzles where I found the most enjoyment. This is a game full of strong challenges with innovative ideas. There’s also a reasonable amount of searching to be done, which varies in difficulty. You don’t necessarily need to find all the items to complete the game so, if you love searching, then you’ll have a good challenge but, if you want to avoid that, then you can work your way round some of the tougher hides. Unusually, I found myself actively enjoying one of the searches because of a combination of good signposting of what to look for, a tough final section and the ability to get pretty much the whole team involved.

The puzzles are well balanced, not just in the sense of being varied but also in their difficulty level. This room made us think more than most, but always for logical puzzles. You’re also manipulating some chunky props, which makes the solutions and working of some of the puzzles more satisfying. There are plenty of them too and, unsurprisingly given that, they’re heavily parallelised – I expect bigger teams to have significantly faster times.

With a lot to get through but also a clear idea of what you need, there’s plenty of tension as you tick off the final items in your search and reach the final challenges. The structure to the game meant that we were confident when we did reach the finale and could fully appreciate what they’d done to give the game a fitting conclusion.

Our team of two finished the game with around ten minutes remaining, having taken a single clue because we’d solved a puzzle correctly, written down the right answer and then chosen to use a different value… Sigh.

Crux Codicillus is a fun room that looks good and has plenty of enjoyable puzzles. The Cluedo-style mechanic works well, although it felt slightly unbalanced, so don’t worry too much if you feel like you’re a long way behind the curve. This is a game that I’d definitely recommend if you’re in the area.

We played as a two, and that was both fun and challenging. I‘d probably recommend three or four players for most enthusiast teams. There’s plenty to solve and, with it being so parallel, you won’t get in each other’s way until right at the end of the game.