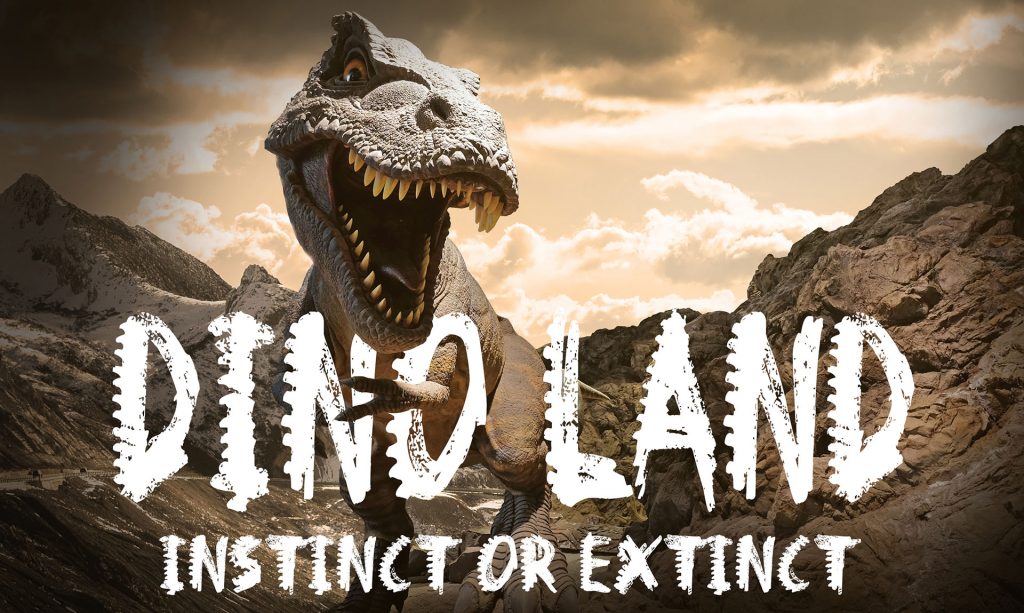 The Panic Room in Gravesend have a reputation for producing high-quality rooms at a rate matched by no one else in the country. On our previous visit we’d played all they had to offer, but turn your back for a minute and you’ll find that they’ve opened a bunch more. There’s an impressive variety to their offerings too but, even by their standards, Dino Land sits apart from the rest. It’s telling that they’ve chosen to extend the experience to 75 minutes and house it in a building with high roofs. Everything I’d heard about this game suggested it was an epic endeavour, so I was keen to head along and play.

That new building is impressive. Where the other two Gravesend reception areas are comfortable but relatively small affairs, this looks more like an atrium to a significant entertainment complex. Oh, and there’s a huge dinosaur that barely fits under that high ceiling – in case you’re in any doubts about being in the right place.

At your allotted time, you’re greeted by a park ranger, who’ll show you a slight variant on the usual Panic Room intro video before taking you to the game for the in-character intro that explains why you are going into Dino Land – as new recruits eager to experience all that dinosaur theme park employment has to offer.

Dino Land is a 75 minute large scale experience which will include live actors, dinosaurs and a whole bunch of escape room shenanigans!

You and your team will be moving between outdoor areas, winding corridors and of course Dino Land HQ. With the help of your park ranger you will work your way through the complex and find a way to save the day!

As the timer started counting down, we were barely given a moment to breathe before being launched into the action, with the  park ranger encouraging us to jump in and solve the first puzzle. It quickly became apparent that he wasn’t going anywhere. While the ranger won’t be with you all the time, they will be around for the majority of the game. How you feel about that is very much a personal opinion, but it left me feeling under pressure to rush through puzzles and then, on the occasions when he went out of the room, frustrated that he wasn’t there when we were stuck.

The fact that we played as a two probably didn’t help, as it made the ranger’s presence all the more obtrusive. With four or more people, I suspect this additional presence would be significantly less noticeable when they weren’t playing an active role. Having said that, our ranger provided a burst of adrenaline at key points in the game in a way that an alarm or recorded message never could, so there were definitely some pluses. The physical presence of someone cajoling you to do something really does add pressure/excitement and, when applied at the right moment, it actually improved our experience by providing some “theatre” in the room. On the other hand, there are plenty of other examples – I can think of at least five off the top of my head – where he had little involvement.

The game itself was a beautifully sprawling affair and, even taking into account the fact that it was fifteen minutes longer than most experiences, it still had far more transitions and space than I expected. I lost count of how many times we entered new rooms, and not only did they have a large floor area but they made great use of it by tracking back and forth to the point where you really did lose touch with the world outside.

Such a large space might have been painful to decorate well, but the theming lent itself to being relatively bare at times, which has allowed the Panic Room to focus their investment on a few key points without harming the game in between. This focused investment has paid off well, with a string of high-quality elements, one of which on its own would be an impressive addition to almost any room. And yes, in case you’re in any doubt: this game is properly dinosaur-themed. I’d seen a few of their videos online, so I had some idea of what to expect, but there were still some surprises.

As you may have guessed with an actor-led game, it was a relatively linear sequence of puzzles where we were generally heavily directed towards a particular one whenever we entered a new space. That, combined with the general rushing about, sacrificed one of my favourite parts of escape rooms: the feeling that you have to pick through the contents of the room (physically or mentally) and work out what you have to do to proceed. Most of the puzzles they had were solid and on theme, although there were a couple that frustrated us: one that we solved relatively quickly but disliked the answer to, and another that we eventually took a clue on and then looked at each other in bemusement when we found out what we were meant to do.

Usually, I’d focus on how well the finale is delivered in a game, but I think there’s so much more to look at here. More than the vast majority of games I’ve played, I felt that there were beats to the story – peaks of action that were broken up by periods of calm in which we got to solve puzzles, and occasional parts where the two overlapped to good effect. The whole game was a gradual build-up to the finale, as the adrenaline crept higher and higher with each successive excitement. In truth, the final act was missing just a little something to seal the whole experience. I knew it was the end of the game because of where we were and the fact that we were rushing out the door, but a game this epic could benefit from a really confident close.

We escaped the park in 60 minutes (of the 75 minute game). It’s not entirely clear how many clues we were given, because there’s a fine line between the ranger guiding you through the experience and actually helping you with the puzzles.

Dino Land is an audacious experience with a huge space, impressive centrepieces and a guided format. In truth, this felt more like an adventure than an escape room. At times, that guidance grated on me, but overall I think it made for a great experience and one that I’d thoroughly recommend.

We played with two people and finished comfortably within the time limit, but this is one of those games that I think really benefits from larger teams just in terms of sharing the fun. Head along with a group of four or even more and make sure to take the time to really enjoy the experience. You shouldn’t be rushing except for when the game makes you :-).

We ate at Caesar’s – a solid Italian restaurant just a short walk away from their three venues.