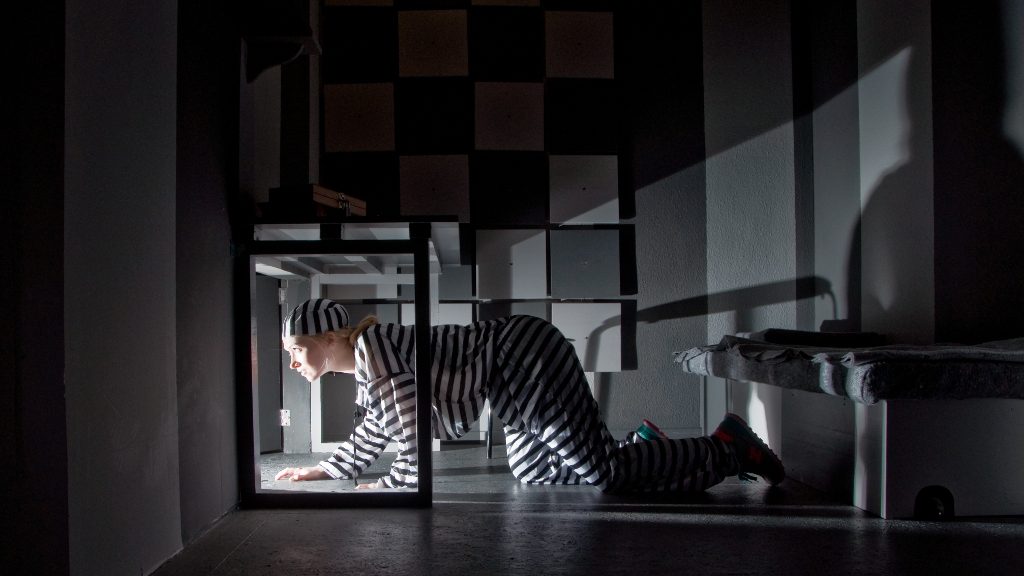 Our first games in Berlin were at Cat in the Bag, a cosy establishment within walking distance of the centre. Split over two levels, there’s a member of staff to greet you at the door and then a comfortable waiting area upstairs with mini-games and refreshments. It was clear the staff were enthusiasts themselves, able to talk about escape rooms and curious to hear what we had to say about our experiences elsewhere in Europe. One slight concern at the venue was that I got the feeling the staff weren’t always watching very carefully (perhaps even watching multiple games), so sometimes they didn’t notice things going wrong or they needed help to know what stage we’d reached.

For booking logistics reasons, we played Alpine Hut as a four and the other two games as pairs. Alpine Hut is by far the most original theme, but I found the puzzles weaker, and we hit several issues that slightly spoiled the game for us. Prison Break and Bunker were plenty of fun as a pair – and in general I’d stick to two or three people per game to avoid crowding and/or fast finishing.

It’s not often that you get to play a snow-themed game, so Alpine Hut was always going to do pretty well for originality. It wasn’t the most amazingly decorated room, but it was certainly charming enough to engage me. There’s no real story beyond being trapped in a snowstorm and seeking shelter, but the initial theme gave a slight Christmassy feel to the experience, which brought a kind of childhood magic to the room. As things progressed, it became a little less detailed, but they made up for it by adding some chunkier decoration as well as incorporating a bit of humour.

Sadly, we were hit by a stream of problems with the puzzles that badly affected the gameplay. You could put a couple of them down to bad luck (one padlock was set to slightly the wrong number, and a puzzle mechanism jammed), but I could tell by the way they handled the issue that it wasn’t the first time, so I’m less inclined to be generous; just buy better padlocks and don’t use mechanisms that are likely to break! Add to that a destructible puzzle, another that was ambiguous and one that didn’t translate very well into English, and you’ll understand our feelings of frustration. It wasn’t all bad, though – one puzzle in particular was refreshingly original, and the core elements behind a couple of the problematic ones were still enjoyable. On another day I can imagine teams feeling much more positive about the game (indeed, check out Two Bears Life’s review).

The finale to the game is a little strange in that it really doesn’t fit the alpine/snow theme. It was definitely a fun idea but, for me, it lacked the excitement of an endgame. Once we knew what we were doing, it was a case of someone repeating a process over and over again until we had what we needed. That would be fine in the middle of the game but, for a finale, particularly with four people present, I found that it lacked a little pizzazz.

Bunker was another game with relatively little story in the room. There was some overarching sense of it being a centre for experiments, with hints at a fuller story in the designer’s mind, but I think it would really have benefited from more backstory explaining why we were there as the game progressed. It’s a fairly bare space, but they conveyed the theme well, with good use of darkness and harsh furnishings to create a depressing environment. While that darkness did affect pretty much all of the game, it wasn’t a major stumbling block – it affected puzzles but didn’t dominate them.

After the problems in Alpine Hut, I was pleased to find a series of puzzles that worked and made perfect sense. On the two occasions when we needed help, it was entirely our fault – both times missing subtle but perfectly visible hints. A couple of the physical puzzles in the room really stood out to me. Neither were particularly novel conceptually – I’d seen them in plenty of other games – but they’d both been implemented in particularly pleasing ways. On each occasion I dragged my teammate across to show her the mechanism, which is always a good sign. There was one puzzle in the game which had an unfortunate red herring resulting in a significant risk of frustration. Fortunately, we missed the misleading clue and therefore got through the game none the wiser, but you may not be so lucky.

The thing that really impressed me about the game was that it managed to pack a sense of exploration and anticipation into what was a relatively small footprint. Right from the start, you have some idea of how the game may unfold, but they tease you for a while before allowing you to explore further, and then they still manage to throw in a couple of surprises as the game progresses.

Prison Break is another thematically bare game although, in the context of a jailbreak room, they’d packed more decoration than most. Again, it’s not a story-led room, but this one didn’t feel like it really needed a story. With such a clear sense of mission, it provided all the immersion I needed.

As is fairly common with this genre, it had a split start, with the team members put into adjacent cells. It’s worth noting that this is very much on the long side in terms of separation – we reunited just before we escaped the game. We were fortunate in getting out very quickly (after around twenty-four minutes) but, if you’re not experienced, I’d be very tempted to bring along a team of four.  If you don’t, then you risk spending a lot of time with your lone player(s) feeling a bit isolated, especially if they’re having a bad escape day!

That said, the puzzles were logical and solid. I was particularly impressed with an original puzzle that played nicely on the prison theme.  There’s one example of tough maths (by UK standards) in the room although, if you actually notice the pencil and paper they provide, it needn’t be quite as tough as we made it… There’s also a fair amount of searching to be done, so that’s worth bearing in mind if either of those are things that turn you off. My one big complaint in this room was a series of props that looked like they might give us codes but didn’t. That resulted in us spending a fair amount of time at a particular point in the game trying a lot of numbers in all the available number locks.

The finale was a fun way to finish the room, although perhaps not as exciting as the game deserved. In the end, I think the experience won me over by its solidity. Decent theming and fun, logical puzzles which relied on plenty of communication. Sometimes the trick isn’t to shoot for the stars but just to choose something reasonably straightforward and deliver it well.