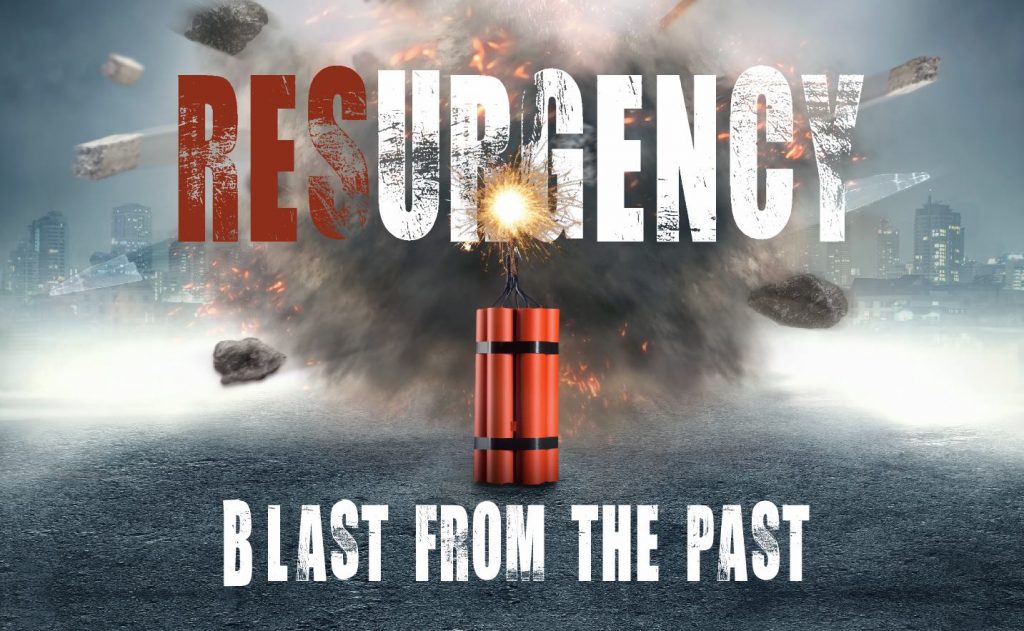 Back to the Panic Room for yet another game. I’ve not done the stats, but they must be the most prolific of all companies in the UK in terms of distinct game designs. I count at least 15 on their books, but there are a few more if you include games that have now closed down. This time round, we were playing Resurgency, a game aimed at smaller teams of up to four players.

Staff at the Panic Room are always friendly and fun so, as ever, we got a warm greeting. They’ve refurbished the waiting space in this venue (they’ve got four or five in Gravesend) since we last visited, and it looked much more modern and inviting, although possibly not quite as comfortable. Fortunately, it was only a short wait before our GM arrived to give us our briefing in character.

Brendan Last has escaped from prison and the rascal has setup in an abandoned factory but we found him! Sadly he knew we were coming and rigged up a bomb. He likes to play games and will give you a chance to defuse the bomb.

Can you defuse it in time?

We’d already played Million Dollar Date Night in the same space, and Resurgency has a small capacity of 2-4 players, so it came as no surprise when we entered a small area for the experience. For all that I like expansive sets, you can easily fit an entire escape room into a tiny space. If you’ve come straight from, say, Dino Land, then you’ll likely be disappointed by that aspect but, in truth, they’ve easily squeezed in an entire escape room’s worth of content, and I never got the feeling that it was too small. There was plenty to look at, poke, prod and investigate. Indeed, they’d put in a couple of rather large props that did little more than fill space, so they obviously didn’t feel it was an issue.

You’ll be warned about strobe effects before entering the game, and the lighting is generally pretty dingy so, if that’s not up your street, then you should think carefully before booking. I found the light effects annoying but gradually got used to them, while Mrs Logic got steadily more frustrated. Either way, neither of us felt it made the game a better experience. In fact, at least one of the puzzles was adversely affected by that lighting.

It’s a tech-heavy room, with at least seven different tech interactions, which I think is a great way of counteracting the smaller footprint. I’m not talking RFIDs and maglocks but much more interesting interactions ranging from simple motorised props to a pretty cool idea that I’ve not seen elsewhere. Sadly, the two most interesting interactions were also two that I found the most frustrating.

Firstly, a challenge became dull because it was slow and long. I suspect it would have been a bit more fun with three or four players, but a combination of having a team of just two and a slight glitch in the input mechanism left us getting bored with the challenge. Secondly, there was a potentially amazing puzzle which lacked good signposting. There was something there if you looked carefully, but we didn’t because they’d (in my opinion) used something that you would identify as just being part of the escape room furniture. In effect, we had a mental blindness to it because we were trying to retain our immersion.

That felt like it was kind of breaking a general escape room rule. Another example of escape room rule-breaking was a padlock that we were meant to open in spite of the sticker on it specifically telling us not to. That’s a cardinal sin for me – while there was some context here that eventually convinced us we should be opening it, it left me uncomfortable. I stopped entirely trusting the room, which is a dangerous position for designers to put players in.

The final puzzle in the game is sudden death. Choose wisely and you win, choose poorly and you lose. No second chances. I’m not a big fan of that in games but it can lead to an exciting conclusion. What makes it distinctly less exciting is when the puzzle is ambiguous, and this one had two perfectly viable solutions (plus a couple of less viable ones).

Think back to the “trusting the room” comment I made earlier. I’d come across something that showed the room was trying to trick us so, when we saw something that hinted at one of the solutions being more viable than the other, we started second-guessing ourselves. It was an obvious hint, so obvious that we decided it was part of the psychopath’s game to catch us out. In retrospect, we were overthinking it and should have gone with the obvious answer (because a deliberate trick on a sudden death puzzle in a game would have been a truly terrible idea), but I still feel frustrated that the game led us down that path.

We finished in 47 minutes having taken a stream of clues. Unfortunately, we chose poorly at the end and lost the game.

I love the Panic Room games. Some are great and some are just good, but I’ve never not enjoyed one. Until Resurgency. Maybe we were having an off day. Maybe the lighting was getting to us. Maybe this just wasn’t our style of room. They’ve put a lot of effort into making a game in a small space but, for me, too many of the elements had flaws. Even before we reached the finale, we’d exchanged comments about how we weren’t having fun, which is rare, but that last puzzle… well, it just made me angry.

That was our experience, but I’ve looked at the UK Escape Room Enthusiast Facebook group and several people have recommended it – not as the best Panic Room game but at least as a good one. If you do head along, I’d love to hear what you think.