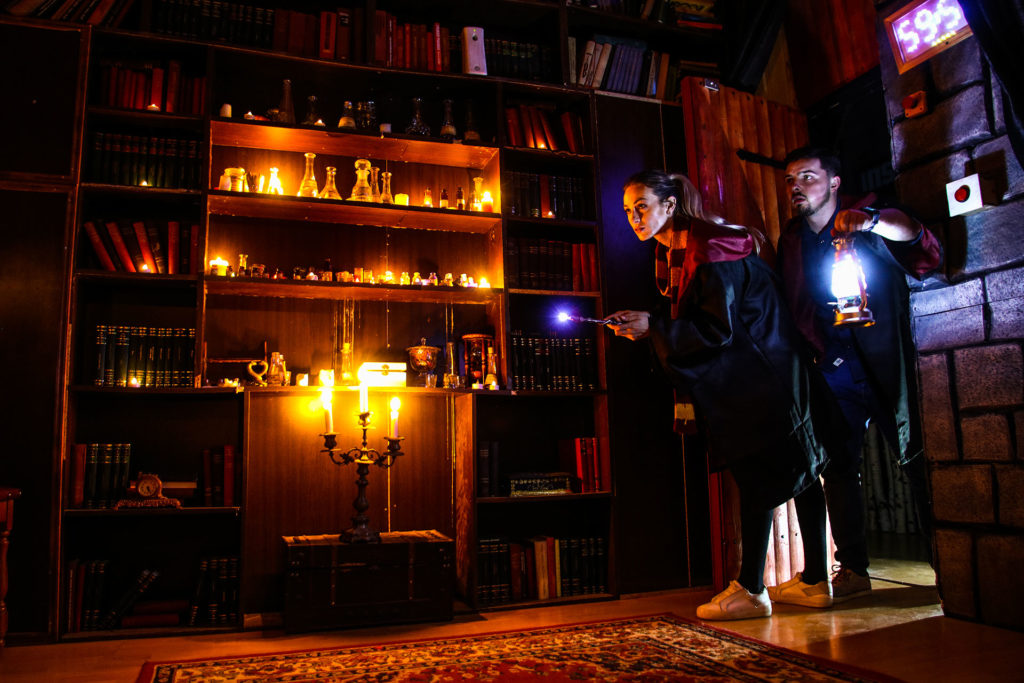 Breakin’ Escape burst on to the London market a couple of years ago with six games. It’s a nicely presented venue with plenty of space for the teams, but the thing that always stood out for me was the way they’d laid out all their games from a central atrium. They focus heavily on set design and, rather than leave that purely in the room, each game has a door that’s decorated in the style of the game – a ship for The Flying Dutchman, a sci-fi entrance for their Horizon Alpha room and, in our case, a wooden door complete with dragon knocker to mark the way into Wizarding School. That’s great partly because it gets you intrigued about their other experiences – which probably helps sales – but also because the immersion starts before you even cross the threshold of the game.

In fact, in this case there’s even more to it than that because, before you enter the room, they give you a magic wand each, which you can use for light. It’s a simple touch, but I think it’s a great start to the room and way more immersive than, say, getting you to wear a cloak.

I love games that use the full space they have available, and this one most definitely does that. You could create a wizard theme that worked with some simple decorations, but what I loved most about this opening was that they’d made use of the height of the space to give the feeling of an ancient place of learning. In addition, clever use of lighting made it feel even higher – as if the illumination wouldn’t even reach the furthest corners.

That’s not to say they’ve skimped on decoration: this is a game that gives you pretty much everything you could want aesthetically. Throughout the experience, you’ll encounter pretty props – sometimes trinkets and sometimes chunkier items – but more than enough to carry the theme. Speaking of which, while this isn’t a Harry Potter game, there’s more than the odd passing reference to that world.

It’s important in escape rooms that you get off to a quick start to help build momentum and excitement but, unfortunately, that didn’t happen here. We hit two problems early on that held us back. Firstly, a piece of furniture which contained an early clue felt like it was locked shut. If only one of us had failed to open it up, I might have said it was just bad luck, but for all three of us to try and fail suggests something was badly wrong. After ten minutes of searching every corner of the room, they contacted us over the walkie-talkie to let us know that we should pull harder. It’s difficult to know what the right way of handling the situation was, but thinking we’d made no progress due to what was, essentially, a maintenance issue was really frustrating .

The second problem we hit was with a logic puzzle where we were utterly bemused. There were props that didn’t fit the puzzle, language that was ambiguous at best and a lack of clarity on what the solution we were trying to divine was. Any one of them would have been annoying, but the combination of all three left us losing faith in the puzzle, and more generally in the game. After a few half-hearted attempts, we called for a clue, which told us pretty much exactly what we already knew. A minute later we asked for another clue. To make matters worse, the way clues work at Breakin’ didn’t help: you call your GM on the walkie-talkie, they ask you what help you want, and then they give you a four-digit code to put into a tablet. I’ve never understood why that’s a good idea – if the GM knows where I am, why not just tell me the clue I need to hear? [Note – since playing this game, they’ve further refined this puzzle and, according to the company, teams are now getting past it more easily.]

A couple of false starts on that puzzle and we were soon on our way. Thereafter, things went pretty smoothly, with the closest we came to taking a clue being when we came across another logic puzzle and worried that the same issue would be present. That worry proved unfounded and, in fact, everything else in the game made sense from a logic point of view. The puzzles were fun and, while they often didn’t fit perfectly in the game world, they did make good use of the theme to help push the magical nature of the experience.

The game was at its best when the puzzles were fully embedded in the story, with some of the challenges feeling that they were equal parts theatre and puzzle. When not just the puzzles but the solutions feel like they fit within the game world, you’re doing well. The final action in the room particularly stood out not just because of that sense of theatre but because it triggered an end scene to the overall game which wrapped up the experience nicely.

We escaped at around the 50-minute mark having taken a clue on a single puzzle.

Wizarding School was a beautiful game with a great sense of exploration and fun set pieces. It’s a good game with enjoyable puzzles, but a couple of significant problems – one with maintenance and another with the logic or translation of a puzzle – left us frustrated from early on. That, combined with their strange cluing system, took the edge off what was otherwise a really fun game. I think the problems are easily fixable and, even if they don’t fix them, it’s still a game I’d recommend.

We played as a three, which seemed perfect for enthusiasts. There’s enough here to keep you entertained, so I wouldn’t worry too much if you had four players, although there are a couple of moments where you may find yourself crowding round puzzles.

We ate in the Taproom on Upper Street, a craft beer place that does decent pizza. I’d recommend the ‘Nduja Sausage and squash option if you visit.