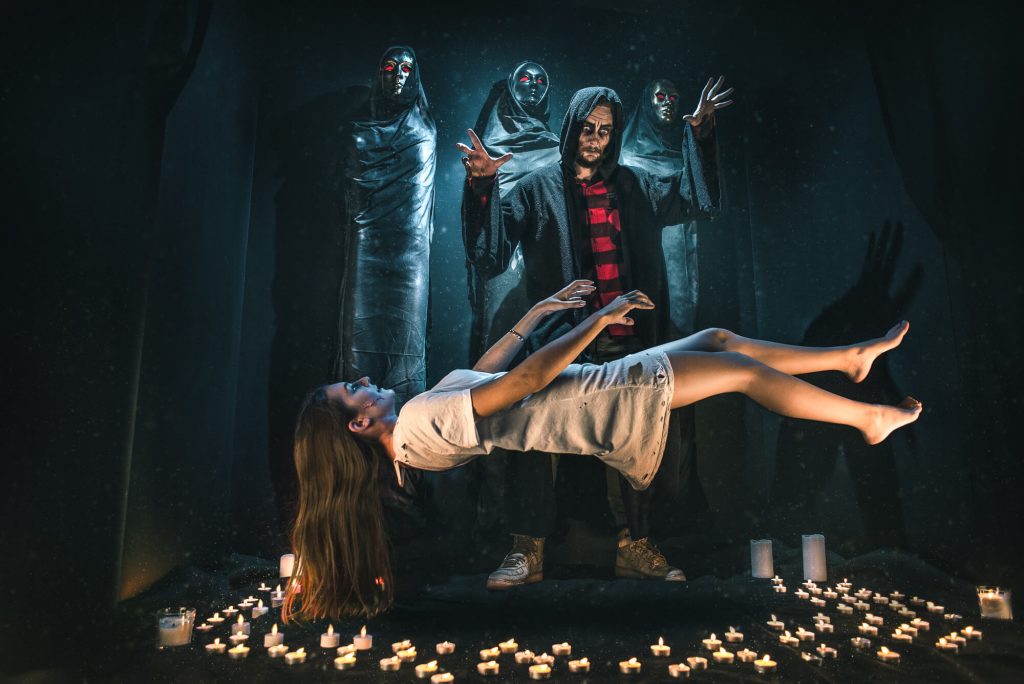 Phobia is another Claustrophobia franchise that has seemingly turned its back on the parent company and decided to go it alone with a new name (but the same games). There are a total of three rooms here: Houdini and Da Vinci, both for 2-4 players, and Loft 13 which, unusually, allows for just one or two people. Obviously given that set of options, we chose to play the last game with four players… It was a slightly strange setup in that our teammates didn’t want to play as a two, did want to experience the game and were very much aware that, if they got very involved, they would be spoiling our experience, so they took a back seat and mainly just watched the show.

There’s a good start to the immersion for this game, which is important because it’s a scary experience and they want to start unsettling you as early as possible. After arriving at the desk and confirming your booking, you’re asked to wait. When your GM comes across, it’s an entirely in-character introduction from a letting agent who’s looking to rent out the flat but starts to hint about what might be to come…

It’s worth saying that the intro was unnecessarily graphic, in my opinion. It’s a scary room, so this part should obviously be scary too, but what they suggest will happen to you if you fail may be a trigger for some people. If you’re concerned, feel free to drop me a message to ask for details.

I’d expected Loft 13 to be a particularly small game, but it really didn’t feel that way. Even in the initial space there was enough room for the whole team. Certainly, from that point of view I wouldn’t have batted an eyelid if it had been for three or four players. At times the layout did make it tricky for more than one or two people to be involved, but I suspect the actual reason for the limit is that it’s easier to be scared with a small team size. When there’s just two of you, you can’t meaningfully solve puzzles while protecting all the entry points to the space, and that leaves you permanently on edge.

They dialled back the scares for us given our teammates’ preferences (not to mention Mrs Logic’s), but even then this was a pretty freaky experience. If you’re of a nervous disposition, this isn’t the game for you – on three or four occasions during the game, they interact with you in some way which really kept the adrenaline flowing.

The initial space was relatively bare, but the decoration improved steadily throughout, and most of the props and decor were truly impressive. It was pretty dark during the whole experience, particularly during that open stage. There was just about enough light to do everything you needed to do, but there was one moment where we missed something critical for a while because the darkness made it very tough to see.

The puzzles were reasonably varied and generally worked well, albeit with one exception where the input mechanism was temperamental. They were the classic Claustrophobia style of puzzles: high-tech, entirely linear and sometimes requiring a little bit of a leap to work out what the designer intended, but overall solid.

The finale was where this game hit its stride, with a beautiful piece of theatre to bring the experience to a close. It’s rare to get a game that delivers an enjoyable puzzle and a fitting ending and wraps it all up in good theatre, so that gets a big thumbs-up from me.