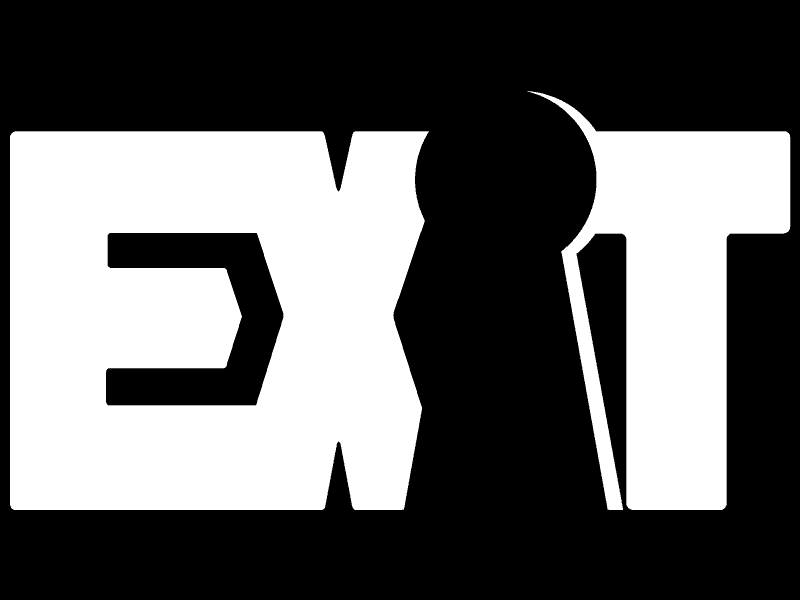 I’ve known about Exit Game, following a visit to their Madrid venue, almost as long as I’ve known about any company in Europe. Back then, I’d done just 27 rooms and, with its many fun and logical puzzles, it was one of the best venues I’d played. Truth be told, I’d probably be a bit more critical now, but I was curious to see the brand in the place where it began and with a couple more years of experience.

With its relatively cramped waiting room, the venue may look small when you first arrive, but it is cavernous once you go into the main space. Over the course of the three games we played, we wandered down hundreds of metres of concrete corridor, even passing through what looked like a blast door at one point. That small reception area is merely a waiting space for people who arrive early; the proper briefing is downstairs, where they’ve got plenty of room for large groups to be entertained – I felt positively lonely when eight of us sat in a briefing area that could have taken forty.

The rooms were OK, in my opinion, although some of my teammates were unimpressed by both the GMing in, and the content of, Lost Cargo. Game of Crowns is well short of being perfect, but it’s a solid battle game if you want to take on your friends. Biggs was disappointing, and I wouldn’t add it to your list unless you’re playing a lot of games. Without a doubt, the most interesting experience at this venue is Huxley, but I’ve put that in a separate article because it really is a very different experience.

It’s worth noting that they also run unusually timed games. Expect 66 minutes for the normal experiences and 44 for the VR room.

Biggs has one of the strangest introductions to a game that I’ve ever heard. When Ronnie Biggs took part in the Great Train Robbery, he unexpectedly found something of value on the train that he couldn’t take with him because he didn’t have the equipment needed to extract it from the carriage. The artifact in question is now in an English country house, and you’re breaking in to steal it. And that’s it. The only involvement of Ronnie Biggs in this whole story is that he didn’t steal the artifact.

A weak story isn’t the end of the world, however, so we jumped straight into the game keen to see what it offered. This was a pretty, old-fashioned room kitted out in a way that looked reasonably full but not so much that it was red herring central. That quality of decor continued throughout the game, except at one particular passage of play, which was bare but in a thematically valid way.

We should have got going quickly with a puzzle that was almost too straightforward, but we confused ourselves and overthought things (no change there then…) and managed to spend ten minutes getting nowhere. Credit to the GM, who bit her tongue and waited. Fortunately, we eventually saw the glaring idea we’d missed, and the puzzles just folded under us in that way that logical puzzles tend to. From being painfully slow to solve that initial challenge, we ended up with one of the fastest times through the opening part of the game.

As the experience drew to its climax, it stuttered badly for me. A few of the puzzles had rough edges, but one in particular – which was the centrepiece of the game – felt like it was packed full of red herrings. This is a real shame, because they’ve got a cool centrepiece to the room, with a style that would work well to build up a sequence of gradually more difficulty challenges. Instead, we were thrown straight into an almost impossible puzzle with lots of ambiguity and distractions. By the time we finished the game, we’d gone from the elation of a few minutes earlier to the feeling that we just wanted it to be over.

Game of Crowns is unusual in that it’s a versus game with a genuine feeling of failure for the losing team. It’s not quite as bad as the UK’s Sacrifice game, where only one team gets to finish all the puzzles. Here, the ultimate goal of obtaining a crown can only be achieved by one group so you will get a tangible feeling of success or failure rather than just a faster or slower time. In another twist, there’s also a concept of casting spells on each other to add to the entertainment and rivalry.

It’s a pretty set that throws you back to a medieval world that’s in keeping with the title. There’s an element of darkness at the beginning, but you’re able to see much more clearly before long and, while I do think this is darkness as difficulty, it worked reasonably well here. The puzzles were generally pretty logical, although there were a couple of points at which we found them not quite as crisp as they could have been. One in particular had a red herring for the unwary that ended up with us getting incredibly frustrated. As a teammate pointed out, the room’s battle nature meant we felt that we couldn’t ask for a clue, which only served to compound that feeling.

The clue system and the magic spells are handled via an iPad, which was the one thing that really didn’t fit the theme. It wasn’t terrible, but I found that it distracted in a way that a monitor wouldn’t have. In fact, I found the magic spells, which were also accessed through the iPad, an unwelcome distraction from the game. In theory, they were prizes for bonus puzzles that you could use to distract the opposition. Each of our teams found two of them and cast them both, but neither team really noticed anything. It’s a really interesting mechanic but, without knowing what the spell is going to do and, critically, where it’s going to do it, both teams ended up wasting them by casting them at a time when it wouldn’t affect their opponents. For it to be fun, I think you’d have to have some way of casting the spell that meant you knew how it was going to affect the opposition and also get some sort of feedback to confirm you’d been successful (ideally by hearing the opposition cursing 🙂 ).

Capturing the crown is the clear finale, but it’s nowhere near as prominent as I’d have liked it to be. I had images of it being a visible goal from well before the end of the experience, but it was hidden away, which I think slightly detracted from the game. That final puzzle also had a little ambiguity, which left us trying out solution after solution. I’ve said it many times before, but the final stage in a game has to be crisp. You should always be confident that you’ve just solved the puzzle that will let you escape the room.