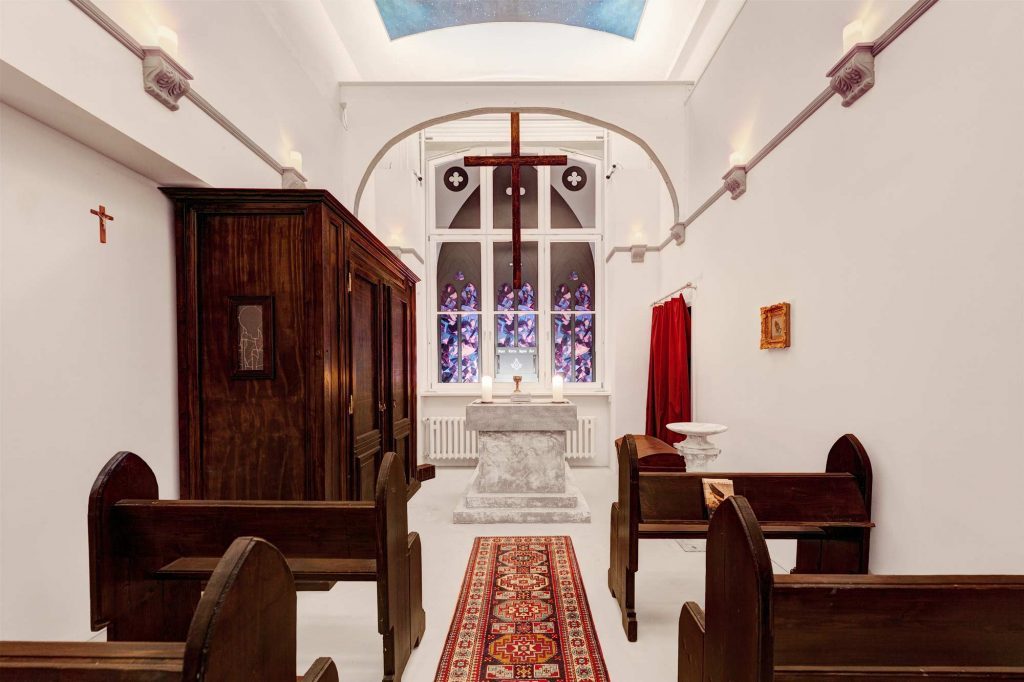 House of Tales has a great reputation in Berlin, with the famed Kowloon and Executioner games among their offerings. Unfortunately, on the day we were visiting, one of the sides of Kowloon was broken (it’s a versus game), so one team had to make do with playing the Pharaoh game instead. Given the teams involved, I opted to let the other grouping play the 18+ Kowloon while we stuck to the tamer Egyptian-themed room.

There’s a huge amount of waiting area here in very different styles – minimalist and sleek out the front, and more relaxed at the back. I think you’d normally wait out in that front space before your game and then be brought to the back for your detailed briefing. However, since we were pretty much the only teams in the space, we had the run of the place and spent most of our time in that briefing area.

While we were there, we had the opportunity to chat to one of the founders of the company about where they’d come from, what they were working on and where they would be going in the future. It’s clear that they’ve got some interesting thoughts on what new ideas they can bring to the market, as well as a real passion for improving their games. They’d just done a strip-down of one game to improve it and were talking about how they’d removed some automation in one of their rooms because they’d found that the experience was better without it. I always feel that the ability to throw away things they’ve invested in (whether time or money) is one of the hallmarks of the great companies.

The Secret of the Pharaohs (4 stars)

Secret of the Pharaohs is fairly unusual in that it’s like a versus room for most of your time but you join back up for the finale. At the start, you’re split into two teams and work your way through most of the game solving almost identical puzzles until you enter the final chamber. That felt incredibly strange to me for two reasons: firstly, it’s a team game, so not actually playing with most of your team for a long period diminishes a significant part of the experience. Secondly, one sub-team will enter the final chamber first and potentially do most of the solving, leaving the rest of the group somewhat adrift during the finale.

However, that odd choice worked for us as enthusiasts. With two people per side, it felt a lot less crowded than the three or four we typically have in a room, and we were pretty much always directly involved in the puzzles. These were logical, with only one moment where we got stuck, and even then it was because, having made an assumption that the split game would be broadly symmetrical in style (if not in the exact puzzles), we disregarded a clue that we’d clearly seen. The only other puzzle that wasn’t clear was easily brute-forceable, but that’s unlikely to be necessary for future players – they were in the process of fixing it up by improving the lighting.

The game itself looked the part, with big, chunky Egyptian decoration and a tomb-like feeling that was intensified by crawling through small tunnels and into additional chambers. This isn’t a game for people who suffer badly from claustrophobia, but that sense of exploration was well worth the trade-off (at least from the point of view of someone who doesn’t suffer from it…).

The finale was possibly the weakest part. We’d deliberately shied away from investigating too heavily until the whole team arrived but, when we did, there was only a single puzzle left to complete, and it wasn’t the most exciting in the world. If it hadn’t been for our insistence on going back to help our teammates before spending too much time in that final chamber, we’d hardly have spent any time solving puzzles together. Go into it with that viewpoint, though, and I don’t think you’ll find it a major problem.

Regular readers of the blog will know I’m a big fan of medieval rooms. There’s something about iron and wood and the chunky decorations that I find incredibly immersive. The Executioner is no exception, with a fantastic set design that’s up there with the very best. It isn’t a Disney-esque version either – it’s a proper dungeon-style game with gruesome tools of the trade on hand. But that’s not to say it’s a scary game: while it has a split start, it’s not the sort of room you’re likely to feel nervous in, and there were no jump scares.

As with our first game, there was a real sense of exploration which kept us on our toes, as it wasn’t always obvious which way we’d be heading next. That wasn’t true of the puzzles, though, where there was usually a reasonable hint about the direction to take. While they were generally on theme, a couple felt very much like they had been shoehorned into the game. This grated all the more because of the contrast with the very thematic central puzzle.

That puzzle was both a high and a low point of the game for me. It turned out to be incredibly temperamental, with both teams hitting the same problem. This was exacerbated by the fact that it was seemingly a physical puzzle where more effort should equal greater success but, in fact, it actually made things worse, so we just ended up frustrating ourselves. While I’m all in favour of automation due to the instant feedback it tends to give, you also need overrides. We spent ten minutes stuck on a part of the game that should have just worked. The result was that we got frustrated and the immersion had to be broken by the GM intervening.

The ending of the game is a slightly caricatured version of the escape, but I enjoyed the theatre it involved and a more interesting than average exit to escape from the room.

Conspiracy theory games are a strange theme, because you never really know what angle they’ll be taking. Earlier in our trip we’d had casino and computer-themed variants, while I’ve played plenty of games in old-world offices. I certainly didn’t expect to start this one in a chapel, but it was without a doubt one of the very best starts I’ve had to any game. That was in part due to a beautifully created set but just as much to the stunning performance by the GM, who gave his introduction more like the minister of a church than like someone introducing us to a game. Oh, and those candles on the altar, they’re real… just in case you think about turning them upside down to check for a false bottom. Not that I poured hot wax all over the altar or anything…

That beauty continued through the game as we accessed new areas, all of them well decorated and with fun transitions between spaces. This both kept the game interesting and continued the great work that the introduction had begun by retaining our focus on the game world.

The puzzle quality, on the other hand, didn’t reach the same heights as the decor. They did make good use of the theme, but things felt a little muddled at times, particularly with the central mission of the game. For example, in one puzzle we couldn’t find a reasonable solution and ended up brute-forcing an ordering only to find out, when we asked the GM afterwards, that brute-forcing was the right answer unless you had some outside knowledge. We were also thrown off a little towards the end by a prop that was printed incorrectly and left us trying to solve a puzzle that didn’t exist. When we pointed out the inconsistency to the GM, he didn’t seem particularly concerned, which was disappointing.

This experience was very much mission-based, with no pretence at a story beyond joining the Illuminati ranks. That mission did give some sense of progress to the game but not as much as I’d have liked. For a variety of reasons, we lacked confidence in the last solve of the game, which left us uncertain as to whether we’d actually finished. That was at least partly our fault, but the finale to a game is key to the experience and, for a room that began with such authority, I’d have liked to see a similar level of confidence in the final act.