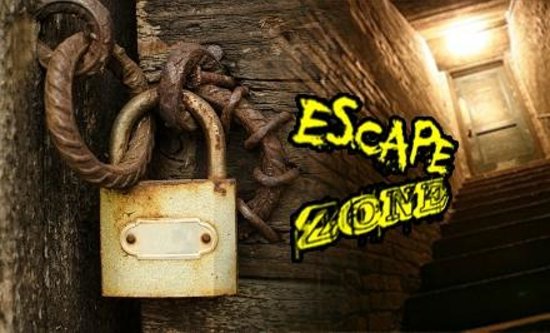 Escape Zone is another venue with a pair of games in a basement. Back to the Present was quite a cool experience after you got past the start, but with a few puzzles that grated. Labyrinth had the gimmick of starting in a maze and then throwing you into an escape room that felt like it had been stocked from a flea market. Both had significant flaws, but they each had some feature that made them interesting for enthusiasts. Definitely not games that I’d put high up my to do list, but good enough if you fancy throwing in an extra last-minute game and they’re the closest ones to you.

Back to the Present had moments of glory and moments where it was terrible. There’s a very clear mission: start up the time machine and get back to the present. That plays out well, with a series of “sub-missions” to help balance out the game and give you a very tangible sense of progress, at least once you get to a certain part of the experience.

The displays in the game are very clearly mimicking the Back to the Future time machine, but I’d describe this game as very much a homage to the film rather than stealing from it. The imagery didn’t replicate the film beyond that, and instead went for a slightly industrial feel. Well, it did in parts. The majority of the set was relatively boring and at times reminded me very much of a worn-out escape room with relatively dull decoration and puzzles.

Fortunately, where it did well, it really did go to town with some incredibly surprising and interesting puzzles – either by their complexity, cleverness in what you had to do, or just cool actions that occurred when solving the puzzle. All too often, though, they lacked direction and we needed help from the GM in order to understand the logic. That help rarely made me feel that the puzzle had been obvious, instead leaving me unsatisfied.

In the end, the game felt a bit tired. With a little more direction and some sprucing up of the non-time-machine parts of the room, I think you could make this into a good experience but, as it is, I feel like you’d be better off heading elsewhere.

Labyrinth is an interesting game in that it’s part maze and part escape room. It’s not a scary experience but, if you’re of a nervous disposition, you probably want to be sticking with your teammates when traversing the maze part. It’s not a particularly complex maze and there are no jump scares, so I wouldn’t let it put you off.

Once the maze is over, it’s on to a pretty drab-looking escape room – which isn’t a massive surprise given the maze was created with black plastic sheeting rather than semi-permanent boarding. This game definitely looked like it had been populated by a trip to a flea market. That said, there were some solid puzzles in there if you were willing to look past a load of red herrings and, while searching through the random items felt very confusing at first, what looked like red herrings invariably were, so you just had to concentrate on thoroughly searching the room. Yes – the hides here are harder than in the majority of rooms I’ve played so, if you really don’t fancy searching, then it’s probably not the game for you.

There’s a clear end goal to the experience, and you have some measure of progress against that as you slowly unlock the padlocks on the exit route. I’m not a massive fan of games with multiple locks on the same item, but it worked better here than in most places, probably because the puzzles were relatively open and accessible, so we rarely felt like we were blocked. Top tip: if you do get blocked, you probably need to search again. It’s not the most exciting finale in the world, but it was good enough.