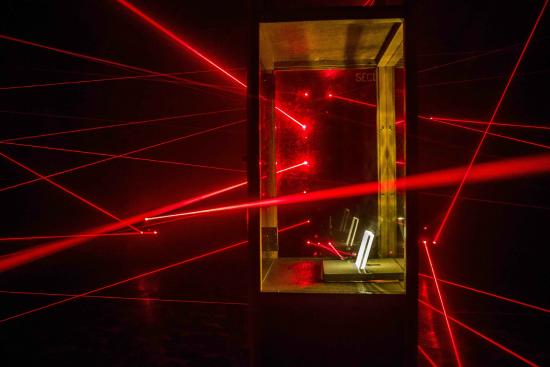 Enigma Mission is larger than your average experience – in more ways than one. For starters, it’s a game that’s set across an entire house, with a corresponding sense of exploration that means you’re never quite sure where you’ll be heading next. As you might expect given its size, it’s also significantly longer than your average game at 90 minutes. I’m a big fan of longer games because it really gives you a chance to savour the experience. Usually, I feel like I have to rush from the moment I arrive in the game – by the time I realise I’ve not made enough progress it may be too late to catch up – but having an hour and a half really helps to reduce that pressure: you know you have time to make up for a slow start.

All the time and space in the world don’t matter, though, if you don’t deliver a decent experience within. Enigma Mission backs up its size with good puzzles and, while they’re not as densely packed as you might expect in a typical experience, they’re certainly not thin on the ground – even adjusting for the longer duration, I’d suggest it’s slightly above average in terms of numbers of puzzles. These vary hugely from low- to high-tech and from cerebral to physical. One of the physical puzzles is worth calling out because it was right at the upper end of the difficulty scale and had one of our team members overjoyed (but don’t worry: if physical puzzles aren’t for you, they’ve thought of that too!).

The game featured most puzzle types, so I think it will appeal to almost any group. While there was a relatively linear feel to the 90 minutes, there were usually two or three puzzles available at any given time, so I never felt like I was blocked from working on something. Pleasingly, a couple of the challenges really benefited from involving multiple people.

To cap it all off, there was an interesting finale which, while not itself full of excitement, had an unexpected aspect that was a nice way of finishing the experience. If you want 90 minutes of good quality puzzles covering a full range of preferences, then this is a fantastic option. Enthusiasts: this experience is sufficiently unusual that I think it should be on everyone’s itinerary. Feeling confident? Play with just three experienced players. Four would probably be OK, and this game can take as many beginners as you’ve got!