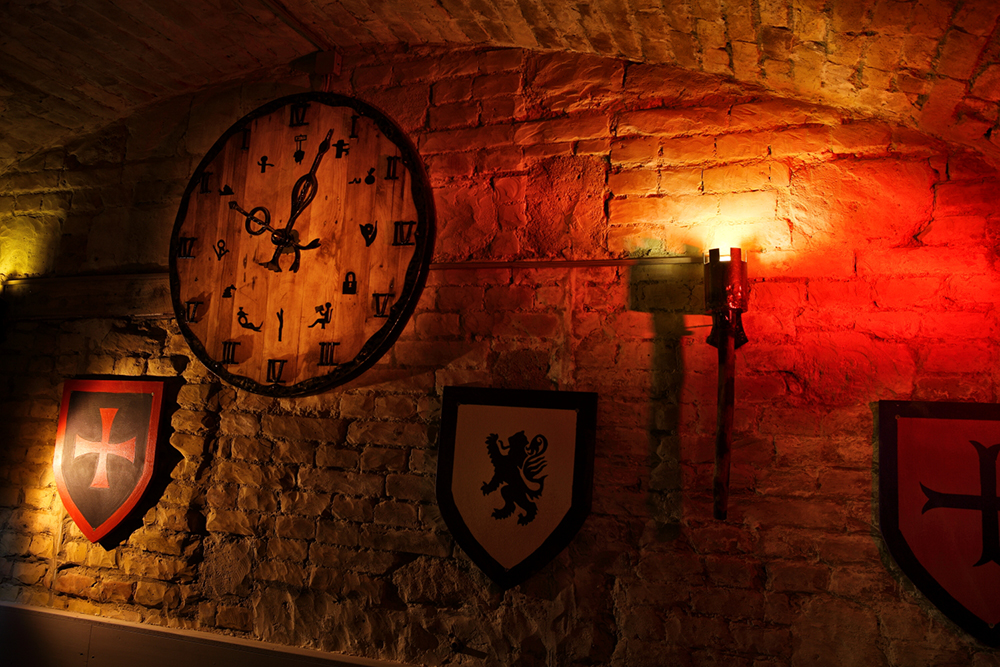 TRAP have a fearsome reputation for producing good rooms and selling them around the world. Before the Russian companies like Claustrophobia came along, they were head and shoulders above the rest of the game designers, so I was keen to try out some of their rooms that weren’t available in the UK. Fellow enthusiasts had already put me off Amazon, and I’d already played their Egyptian and Tomb games, so all that was left were the Armageddon and Medieval rooms.

At the time of writing, the games are distributed across two sites and, while they’re both fairly central, they’re just far enough apart that you’ll want to make sure you don’t get it wrong! As expected, both the games we played were very good. Armageddon was a wonderful mission-based room where many of the tasks really felt like we were putting an old missile station back together, while Medieval was a cool puzzle room full of interesting puzzles (even if we struggled a bit with completing them!).

Embarrassingly, I didn’t realise we’d actually entered the game when we were given our briefing, and so it came as a bit of a surprise when the game host walked out and the timer started. The door had been open when we arrived, and (spoiler!) one of the things in the room is a locker, so I figured it was just where we could store our stuff… That’s not to say that the theme is poor – just that you don’t start somewhere particularly exciting. Things improved before long, however, and I was particularly impressed by how well they’d made use of the layout of the building. It’s great to see a company taking a space that’s perhaps a little unusual and using it as an asset rather than a liability.

The contents of the space were pretty good too – perhaps a bit bare at times, but that sat reasonably well with the missile silo storyline. Furthermore, there was a centrepiece to the game which both added plenty of ambiance and helped give a nice sense of progress to the game. In fact, one thing that I really liked about this room was that the story was central to the game: we had a very clear mission right from the start. This wasn’t an ‘escape the room’ mission but rather more of a quest, and many of the puzzles fitted well with that story line.

As I said, there’s a good centrepiece, but that’s far from being the only part of the experience where the set isn’t just a pretty backdrop but an integral part of the game. Throughout the games we played in Budapest, we would come across pieces of hardware that probably hadn’t been designed purely for an escape room but had been cannibalised from a real piece of electronics. Here, where we were trying to get a missile station back online, interactions like that really contributed to the immersion.

There wasn’t much to do on the search side, but what little there was was better than your average searches. I particularly appreciated some trickery in the room where they hid things in plain sight and almost caught us out.

In spite of lots of fun puzzles, there were still some rough edges. One particular  luck-based puzzle stands out as particularly annoying in my mind. It reminded me of one of the puzzles I’d played in a TRAP room back in the UK which seemed skill-based on the face of it but was more about luck than anything else once we actually tried it. That’s fine if luck means trying for thirty seconds or a minute until you succeed, but two of us spent a fairly significant chunk of our time in this room trying to get past this one puzzle. Worse still, if you didn’t pay attention, you could miss out on part of the solution to it, with the result that you’d have to brute-force a lock (albeit from a tiny set of combinations).

All was redeemed at the end, with the proper finish to a room which sets you the task of launching a missile – like much of the rest of the room, the final action was exactly on theme and followed up by a little bit of an epilogue that had us entirely hooked. We escaped after 30 minutes having taken no clues. That got us the room record as well as a bottle of bubbly – a nice touch both by way of congratulations and to appease anyone who felt like they hadn’t got their money’s worth by escaping quickly.

There’s something about medieval rooms that I really love. I think it’s probably the wood and stone decoration and a general bias towards chunky physical puzzles. TRAP’s Medieval game is no exception: it’s both beautifully decorated and made almost entirely of physical puzzles.

It’s not the biggest space in the world but, as soon as you enter the room, you’re immediately overwhelmed by a bunch of puzzles to get stuck into. It felt a bit like an escape enthusiast’s playground, and I could barely decide where to start. That’s probably the biggest problem of the room: It looks like it’s going to be one of the most open games you’ve played, with puzzles very much on show from the start, but the props and clues you need to complete them are actually hidden away. The upshot is that you need to focus on finding your entry point into the game and then work from there.

As that may hint, this isn’t a searching room – in fact, there’s really only one search-based task, and it’s not very difficult. Or at least it shouldn’t have been very difficult, but we made a rash assumption and, in spite of finding the item in question, we took a very, very long time (and a hint!) to actually use it. Beyond that, it’s puzzles galore. Big, beautiful puzzles. Most rooms have one or two. Here, they may even have reached double figures.

Some were pure and simple physical interactions – we immediately knew what we had to do and just had to follow through. Some required us to think about how we were going to achieve our goal but were easy once we’d done that, and one or two required a modicum of skill. It was a fantastic set of puzzles from my point of view. Were there flaws? Yes – there’s no real story in the game and at times there was a lack of direction that left us very uncertain about what we were meant to be doing – but they’re easy to let slide. Really, I’d encourage people visiting the capital to play.

My teammates are convinced we struggled in this room because we’d played too many in a row. Personally, I’m more of the opinion that we just had one of those games. The net result was us escaping in 55 minutes. The linearity held us up hugely in the earlier stages, so I could easily see this being another 30-minute room for a decent team.

I played this game over in the UK and have no reason to believe it would be significantly different in Budapest (aside from being slightly more spacious). Great chunky puzzles and a good open start – though larger teams may find the ending a little cramped and linear.

I didn’t play this game, but friends who did said it was distinctly average and not on a par with the other TRAP games, so I’d suggest giving it a miss unless you’re a completionist.