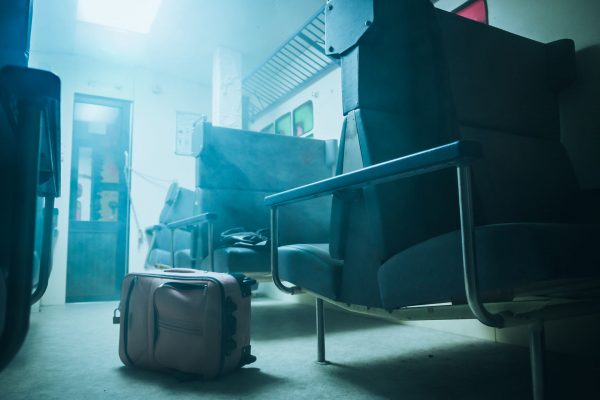 I’d heard lots of good things about Escape Tales, and so was keen to see what they had to offer. They’ve only got a single game (although another is in production), but it had a reputation as being pretty and immersive. After parking round the back of their building, we were greeted by the owner (also our GM), who was incredibly chatty and more than happy to have some fun with the group and discuss all things escape rooms before the game began.

Prior to entering the room, you obviously need to put on your crime scene overalls. I’m not a big fan of dressing up, but this is fairly low key and while, for me, it doesn’t make much difference, I can see what they’re trying to do and applaud the idea. That, combined with another prop that we had to take into the room, certainly kicked the immersion off.

Once inside, though, they needn’t have bothered, because this game is full on immersion with an incredible set that really teleports you to the train crash story. That set’s mainly very realistic, although at times it swaps over to an almost cartoonish style. Either way, this is a great setting for a game.

It took a while for us to fully appreciate how pretty it was, though, because we were playing in partial darkness. At the time I found that a little frustrating but, understanding how the game works now, I think it was reasonable. We took a while to find out how to get enough light to make progress, but that was on us – our GM waited a fair amount of time to give us a clue, but I don’t think it was unreasonably long.

The puzzles flitted back and forth between making perfect sense in the story and being full-on escape room logic. I loved an early challenge which took a physical puzzle and embedded it in the set in such a way that it made perfect sense. It was a beautiful example of how you can take a generic puzzle and solidly attach it to your game. I’m not entirely against escape room logic, but I always find it a bit strange when games swap back and forth, because I’m left wondering what style of puzzle I should be expecting.

As well as that, there’s a tremendous amount of searching to be done. There’s a huge space which is packed full of red herrings. We spent a loooong time carefully going through everything we could find and trying to work out what we were looking for. In the end, you need only a small subset of the information you have access to. Perhaps that explains why we failed to solve a couple of the answers that we really should have but, either way, they were dull puzzles that I don’t really think belong in an escape room. That said, the way we had to use the solutions was pretty cool: they’d used a great alternative to a three-digit padlock and provided players with a fantastic transition to boot. It was the perfect tonic after our previous frustrations.

Unfortunately, we’d barely got over that hurdle when we hit another problem – this time language-based. That was incredibly unfortunate. There were clear instructions about what to do but, when we followed them, they didn’t work, and that left us a little stuck. Our GM didn’t realise why we were struggling and left us for a while, thinking we were trying to solve the underlying puzzle. We asked for help a few times but, by the time we received anything useful, frustration had firmly set in. That wasn’t the only example of how language hurt our game. The finale to the experience relies on language too and, while they’ve translated it to make it possible to complete, it’s far slower when you don’t speak the original language. Another input mechanism that was a neat alternative to a padlock had similar language issues – it relied on you entering a series of things 100% correctly. One mistake and it wouldn’t work, with no mention of what you’d got wrong. I think that would have been cruel for native speakers but, with foreigners, typos were far more likely. Translating a game is sometimes much more than making it literally solvable in another language.

The ending to the experience makes good use of the theme and certainly ramps up the pressure. Unfortunately, by the time we got there, we were pretty much doomed, which made things a little depressing. In theory we escaped, but only because the GM allowed time to go a bit elastic. For a game that had promised so much, it was sad to see it go out on such a weak note. I’ll always wonder whether we were tired (we set the record on the next game, so probably not), unlucky or just not suited to their style of game. Either way, as was perhaps fitting with a game called Runaway Train, for us at least, it eventually felt like a train wreck.

That’s all on Escape Tales – want to read more about other local games? A link will be added here when the summary article is published at the end.