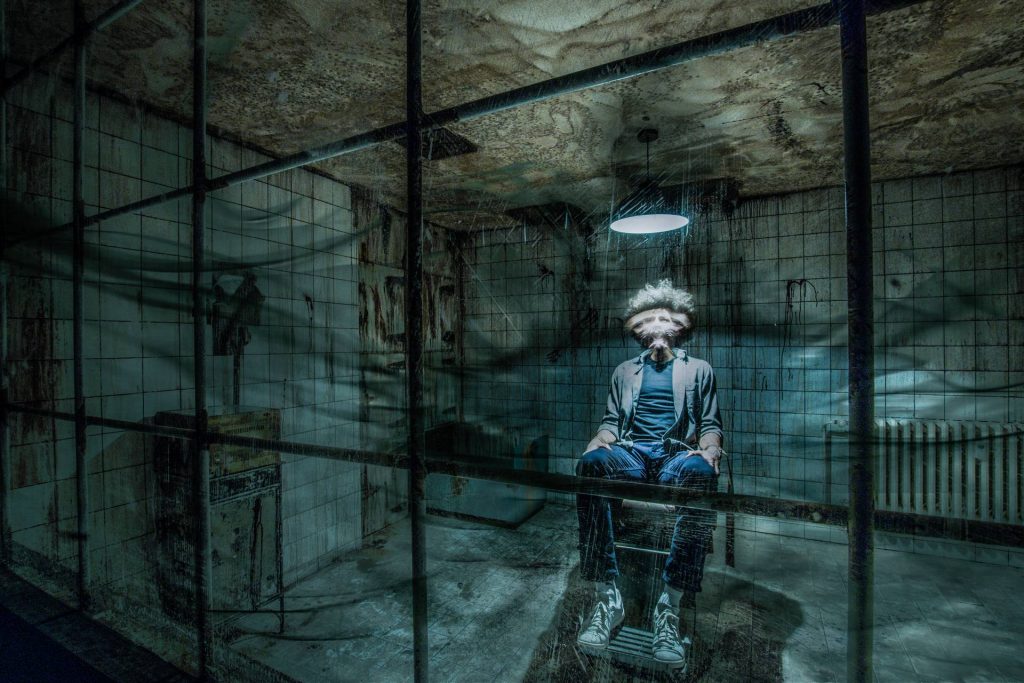 On my previous visit to Prague, The Chamber had been the standout company, with a clear progression of quality through their games culminating in a couple of outstanding experiences. When I heard their new game, Poltergeist, was being released, I was excited but also a little nervous: by all accounts it was meant to be even scarier than Haunted House, and I am most definitely not a fan of horror.

As reports started coming back to me, though, it became clear that, while this game was truly scary, it was also getting an amazing reaction from enthusiasts as a thoroughly immersive room. The more I heard, the more I knew I needed to head back to Prague and play.

The game shares a venue with their other two newest experiences near the centre of Prague, so it’s fairly easy to get to and a good option if you want to play three high-quality (albeit scary) rooms in one location. There’s a pretty waiting area with good facilities, and I was pleased to see they’ve expanded it since I was last there to make room for an extra game’s worth of people. When you’re all set to begin, the GM comes to take you downstairs and show you the entrance to the game. As with Haunted House, they create tension by making it clear that the GM definitely doesn’t want to join you in the room and that you’ll need to take yourself across the threshold…

Forty years ago in communist Czechoslovakia, a dangerous scientific experiment went out of control. Some doors are just not safe to open. What are you willing to sacrifice to learn the truth?

In early 1980’s an international team of scientists was trying to explain what lies behind a phenomenon generally called “POLTERGEIST”. This name was given to all sorts of combined paranormal events, such as strange loud noises with no apparent source, telekinetic moves or strong fluctuations of the electromagnetic field. After some time, scientists found out that these strange events often appeared near a certain type of sensitive person. Several of them were chosen to take part in a top-secret experiment, where the researchers injected them with a special substance to stimulate paranormal events. Some claimed, that after receiving this stimulant, the “specimens” were able to somehow connect our world with its paranormal counterpart and thus gained special abilities at the cost of their own sanity. The goal of “Project Poltergeist” was to exploit this knowledge for military purposes.

However, in the secret research facility located somewhere in Prague, things started to get out of hands. For some reason, the entire project was prematurely terminated. Soon, it became obvious that nobody made it out of the facility alive, but the government just claimed that nothing like the “Poltergeist facility” ever existed in the first place. For many years, nobody could be sure this whole project was not just another urban legend. Until a strange walled-up iron door was found…

Will you gather your courage to investigate a place filled with paranormal events? Will you learn the truth about an extraordinary scientific experiment or will you join those who found their death in the Poltergeist facility? Will you dare open the door?

Once inside, we were greeted by a dimly lit environment with plenty of decoration to make us feel like we were in a disused industrial facility. It didn’t just give the impression of being some sort of medical or scientific institution as you might have imagined given the story: it was solid and powerful, hinting that there were dangerous forces within the walls that needed to be contained. They reinforced that feeling throughout the experience and, while it was darker than I’d have liked, it was neither a search-heavy room nor did the lighting seem to get in the way of solving puzzles.

It’s an expansive game filled with impressive decoration. Time and time again we came across elements in the set that would have been centrepieces in most experiences. They used that sprawling space to their advantage, sometimes leaving us vulnerable because it was so open and at other times because it was so closed. This isn’t a game where you’re constantly being terrorised, but it’s also not a game where you can ever feel entirely at ease.

It’s not just static decoration either – there are plenty of theatrical moments, geared towards ramping up the adrenaline or increasing the immersion, usually both. In fact, there’s so much going on during the game that you’d be forgiven for missing some of the action – we failed to see one particularly cool effect until it was drawn to our attention after the game. That’s testament to the effort they’ve put into creating the room; they can afford for you to miss out on some of the effects and still give you a compelling experience.

One moment in this game stands out for me because it’s the first time I’ve felt anything like fear in an escape room. I’ll happily play along with scary games, and I obviously react to the jumps, but I’ve never really experienced that visceral feeling where you just want to flee the scene or curl up. They carefully construct events to allow them this opportunity and then expose players to the terror they have in store for them in a controlled fashion. This isn’t a pure jump fright (although there is certainly an element of that!) but a sustained experience where they allow that feeling of fear to grow within you.

So, yes, it’s a scary game, but I was surprised to find it was also a cerebral one. My experience is that scary games tend to have poor puzzles, but that wasn’t the case here. There were fewer puzzles than in most escape rooms, but the ones they had included were good. The one time across the entire experience when we needed a hint was actually with the most traditional escape room puzzle that we’d found. I guess that we were more affected by that fear than we chose to let on…

Usually, I’d talk about the finales, about how the last few minutes in the room helped to cement the experience. The truth is that this game was pretty much a finale from start to finish. The tension rose as we explored further into its depths and uncovered more of the happenings in the strange environment. There was no one moment where the game turned: just a series of points where we better understood what had happened. By the time we’d come to the full realisation of what was going on, by the time the game reached its conclusion, it’s no surprise that we were racing out the door as fast as our legs could carry us.

We escaped in around 57 minutes having taken a single clue. The GM has a lot of scope to slow you down by ramping up the scares (and a whole lot more!), so I definitely wouldn’t focus on the escape time when you play.

I’ve said on many occasions that I don’t particularly enjoy scary escape rooms: I’ll play them but they don’t excite me. That’s categorically not true when I look back on Poltergeist. This is absolutely a scary game, but those scares are carefully choreographed. This isn’t about someone jumping out at you unexpectedly: it’s about allowing your mind to run wild as much as possible. Along the way, they’ll show you a beautiful, expansive and creepy set filled with theatrical moments and sprinkled with enjoyable, logical puzzles that all but guarantee you a great experience.

I thoroughly recommend this game IF you think you can cope with the scares. If not, then stick to their other experiences, because this is most definitely not for the faint-hearted!

We played as a three. As with any scary room, if you want the maximum terror, opt to play as a two; or, if you’re a scaredy cat, then go for a full team. I wouldn’t worry about numbers beyond that, because the theatre and decoration in the room work equally well for any team size.