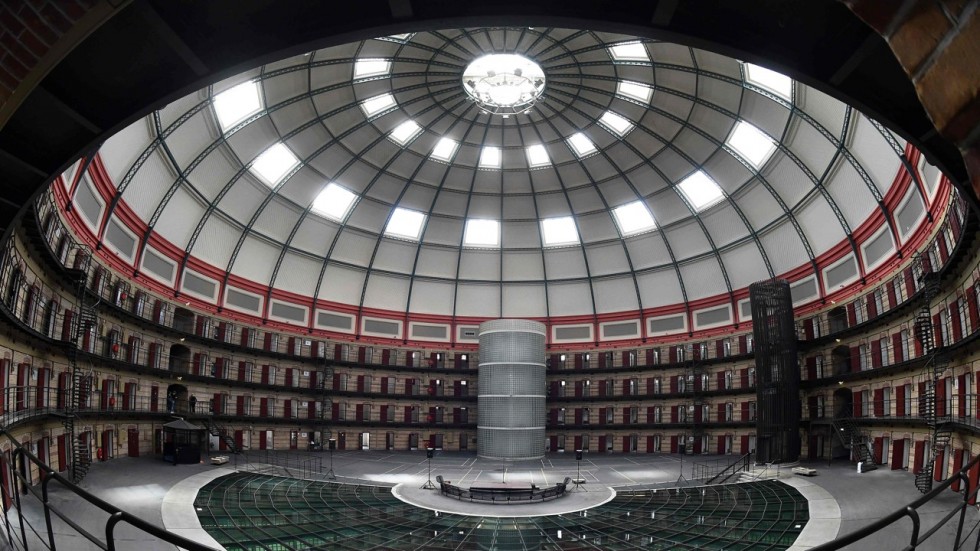 Let’s start by making this absolutely clear: Prison Escape is not an escape room – at least not by any normal definition. It is a game – you can win or lose – and it does involve escaping, but calling this an escape room does it a disservice. More importantly, it’s likely to result in players not enjoying the experience to its full extent. In reality, Prison Escape is a massive, open-world immersive gaming/theatre experience.

If you’re looking to play this game in English, then there’s good news: after the success of the inaugural event that we attended, they’ve announced that they’ll run additional international experiences. The next one takes place on 14 December but, if that doesn’t work for you, then keep an eye on their Facebook page, where they announce upcoming events.

The game starts outside the Prison dome in Breda, where the inmates collect ready to be processed. And I mean processed. The experience starts before you’ve even been registered, when they corral you and get you to conform to their rules, calling you forward by name for the last time because, thereafter, you’ll just be another number in prison overalls.

It’s an intimidating atmosphere, with evil prison wardens who look ready to… well, best that you don’t find out exactly what, and a huge, imposing structure for your confinement. I’d been fortunate enough to visit the Breda dome a couple of times before, so I knew how truly amazing it is but, if this had been my first visit, it would have been an awe-inspiring and intimidating sight.

If you’re expecting to get straight into the action, then you’ll be sorely disappointed. They’re in no rush. There are a lot of people to process and, more importantly perhaps, part of the experience is the loss of control you feel. You no longer have a say in what you’re doing. Don’t mistake that for it being dull, though. They kept me engaged throughout this period with plenty of small interactions and then a few set pieces to give us a feel for the place and our mission within it.

Once that’s over, you’re led to your cells, from where the game begins. I say game, but it’s not entirely clear to me whether that’s the right term for it. As I said above, you can certainly win or lose – your goal is to break out of jail so, if you don’t succeed, that’s a de facto loss – but it’s not clear to me how much skill is involved or even whether losing is necessarily a bad thing. Rumour has it that players who lose end up experiencing something equally enjoyable, although the one person I spoke to who lost that night didn’t feel that way.

It’s hard to express just how big the game is. After leaving the confines of my cell, I visited probably ten different scenes and interacted with a bunch of players and non-player characters. As well as the central story that’s presented during processing, there are tens of smaller strands of narrative running through the game, and each actor you meet is likely to have some shared story with other characters. You learn about who hates who, what problems individuals have and what they need, and then you try to piece it together. Maybe a chance encounter in one place gives you some information about a weakness in the security. Maybe you make friends with someone powerful. Maybe you happen to get a work permit that gives you more freedom. Part of the beauty of this game is that there are a LOT of choices to make and no clear indication of which are the right ones.

It’s part of the beauty but also part of the frustration, because the luck of those choices is a huge factor in whether you manage to escape from jail. I had a fundamental misunderstanding of the game and, by the time I worked out how things would play out, I had to rely on luck rather than good decision-making to make a successful bid for freedom. Occasionally, people do find genuinely original ways out, but they’re very much the minority (albeit a minority that are raucously celebrated at the end).

In essence, then, the game breaks down into four parts: the initial processing; the exploration phase, where you wander round the prison and see all the options open to you; the planning, where you work out how you’re going to escape; and, finally, the escape, where you actually make your bid for freedom. At each of the stages you’ll get plenty of theatre. Sometimes this is large-scale with the whole prison population. Sometimes it is intimate, with just you and a guard. Looking back, it feels almost cruel that there’s so much on offer and so little time to investigate it all. I’m not in the slightest bit surprised that people return many times to experience the different stories and attempt various manners of escape.

The characters I did come into contact with were truly impressive. Every single one had their own personality which, when combined with the story, made the interactions interesting. After the game, when they stop their acts and you get to chat to some of them, it’s immediately obvious just how good they were. The evil, the arrogant, the incompetent, the tragic and all the other masks come off, and they become, well, just normal people to you aside from possibly the slight feeling of animosity towards the more sadistic guards that inevitably takes a while to dissipate.

Wandering round the prison, visiting the different scenes, sneaking past the guards and generally finding out about the story are great memories. I took a while to find my feet and, based on the conversations I had afterwards, what I got up to was very different from most of the players, but I still had a great time and, fortunately, managed to luck out at the death and find a way out of jail. It was luck, though, and that’s the one thing I find sad in this experience. I wish there were more options to feel like you deserved to get out.

Prison Escape is an epic, theatrical, immersive gaming adventure. It’s packed with interesting stories and characters, and the backdrop is one of the most beautiful buildings you’re ever likely to set foot in. If you ever get the chance, I’d highly recommend signing up for tickets.

That’s all on Prison Escape – want to read more about other local games? A link will be added here when the summary article is published at the end.