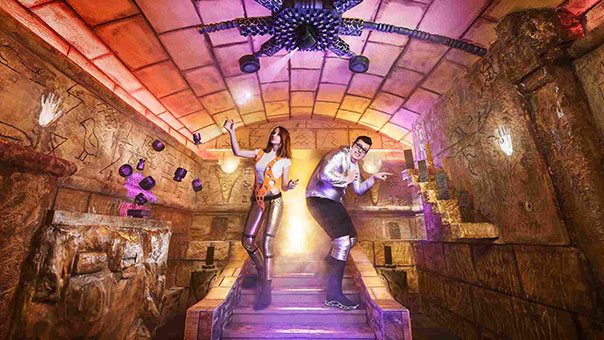 Having visited Prague last year, I was already very familiar with Questerland, where I’d played three games. They were in the middle of building their fourth room back then, and all I’d been able to see was an impressive-looking Egyptian-style doorway. On our return trip, I was keen to see whether it lived up to the quality of that hieroglyph-clad frontpiece. I was also a little nervous because reviews on the enthusiast groups had been less than great, suggesting that the puzzles were illogical. Having had such a great experience the last time round, I still felt I should see for myself in spite of those warnings.

Visually, Star Element is impressive. There’s the odd place where it looks a little tacked together, but overall they’ve got a beautiful set that isn’t just a backdrop but an active part of the game. At the beginning, in particular, it’s a bit full of red herrings, but as a whole the decoration did a good job of adding to the theme. And that theme is a little… well, confusing. It’s clearly playing on the Fifth Element film, with an Egyptian-meets-space-travel theme that provides an interesting – albeit slightly strange – contrast in the game. Someone once said that, if you take two standard themes and stitch them together well, you can create something potentially interesting. For me, this didn’t feel at all like that: instead, it was more like two very different escape rooms had been squashed together.

The good news is that the puzzle logic wasn’t anywhere near as bad as I’d heard. I heard a rumour later in the trip that they’d revamped the game. Either way, we never felt that it got in the way of the experience. While they weren’t always to our taste, the puzzles seemed to be pretty logical with, at worst, a little ambiguity. The structure’s interesting in that it aims to be very parallelisable, so there were a few puzzles that allowed our team to split up and investigate individually.

That’s great in theory, but I found that it made the opening section confusing. You solved a puzzle, you got some information that you needed to remember, and then you continued on your way. Without keeping careful tabs on other players, it was easy to redo a puzzle. Equally, if you didn’t remember the information, you had to redo that puzzle. It wasn’t horrendous, but it felt like their decision to use technology and avoid traditional padlocks had made the meta-puzzle that pulled that first set of parallel puzzles together less fun.

Later in the game, there’s another set of parallelisation that caused us similar problems. Which parts have we solved? How confident are we? What this game really needed was simply some paper, but they hadn’t offered us any. That problem was exacerbated by some ambiguity in a couple of puzzles, which led to wrong answers on our first two or three goes. As players, it’s bad enough encountering ambiguous puzzles, but to then have to keep track of a whole load of other states for an extended period, wondering whether you’ve misremembered something, is a real buzz-kill.

In the end, this is a bit of a confusing game but one that, overall, I enjoyed. There’s cool tech, pretty sets and some fun puzzles. Occasionally it got itself in a muddle by relying too heavily on the technology, and a few puzzles were a bit dull. I wouldn’t steer you away from playing, though, and it probably ranks higher in my list than, say, Bank at the same venue. Go in to enjoy the scenery, take each puzzle as it comes, and I think you’ll have a good time.

That’s all on Questerland – want to read more about other local games? A link will be added here when the summary article is published at the end.