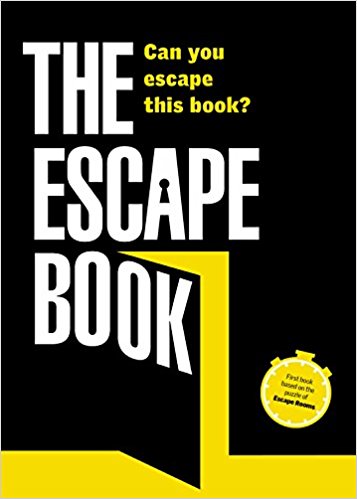 The Escape Book is a striking product. With its yellow and black colour scheme and strong lines, it conveys a sense of seriousness that gave me both hope and doubts. Would this be the stylish professionalism of a game lovingly created by an escape room owner/enthusiast or merely the product of a corporation jumping on the bandwagon?

Of course, you shouldn’t judge a book by its cover, so the only way to tell was to get reading. I was intrigued from page one. This book isn’t going to win any prizes for literature, but it’s better written than most things I read and even passed the Mrs Logic test (who reads books with words I don’t understand).

The story centres around a journalist, Candela, who’s investigating a secret financial group. The chapters bounce around between the events of her childhood, her investigation into this group and, of course, the puzzles themselves. At three or four pages for the average chapter, and most of that dedicated to advancing the story, this game is very much designed for a single player. We usually complete play-at-home games and books as a pair, but this one is very much a solo journey.

One of the consequences of creating a solo experience is that there’s no one to fall back on if you get stuck on a puzzle. Fortunately, most of them were pretty straightforward and logical and so would yield to a little effort. That said, there were a few that didn’t work so well, meaning that there was a good chance you’d need to make use of the clue section at the back of the book. With around five or six clues per puzzle, it was always able to help me get to the right answer.

Most of the puzzles were fun to complete, but a couple of challenges were just a little tedious, requiring me to make a bit of a leap about what the puzzle might be and then follow that logic through a lengthy search until I managed to confirm it. While the text often gives you some clue about how to proceed, on the two occasions when it was most needed, I found it a little lacking in direction. Those weren’t the worst offenders, though – one required some very outside-the-room knowledge, another used a puzzle type that has often been criticised in team games because some groups of people just won’t be able to get it, and a third one, near the end, felt like it had just too many leaps to realistically solve it.

The game increases in difficulty as you progress, with the hardest puzzles coming pretty much at the end. Unsurprisingly, that increase in difficulty coincides with the story becoming ever more gripping. That caused some tension between wanting to progress with the narrative and wanting to take my time to solve the puzzles without resorting to clues. It worked for me – with the new chapters being all the sweeter for having to struggle more for them – but I can well imagine others finding it less appealing. When you finally reach the end, it’s perhaps not the ending you expect, but I think you’ll find it suitably rewarding.

The Escape Book is a great combination of fun puzzles and interesting story. Yes, there are flaws with a few of those puzzles but, if you’re willing to use the clues in the book, you can always get past them. At under a tenner, it stands up well against other escape room products and, even better, if you’re careful with the book (one puzzle encourages you to damage it slightly), you can pass it on to a friend to play.

Full disclosure: We weren’t charged for this book. That doesn’t influence the review – you can read more on the About page.