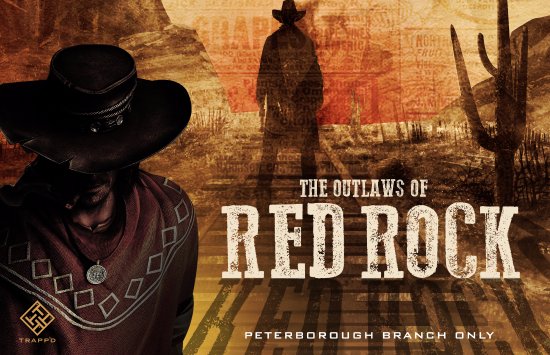 Having escaped game one at Trapp’d Peterborough, we had a short break in the lobby before returning to the action. It’s one of those venues where successful escapees get to sign the wall which, at the time of writing, still had enough space to feel like we weren’t just squeezing in the briefest of messages. I’m sure that won’t last long!

The introductions to the games are on large glossy cards which, while significantly better than most venues that go down this route, still feels like a poor option when compared to either a well delivered intro from the host or a recorded video briefing. That done, we donned blindfolds and headed to Red Rock…

An old legend surrounds the mysterious town of Red Rock. Strangers talk of an ancient rare jewel said to hold unimaginable value. It was rumoured to belong to the first mayor of Red Rock around 300 years ago who was supposedly assassinated in a political conspiracy between the neighbouring towns. Whether this jewel truly exists, nobody knows. The townspeople are not particularly welcoming to outsiders, barely leaving the town and usually keeping to themselves. The towns local sheriff, Newman “The Law” Dalton, is the only man alive who knows the real truth. But secrets never stay secret for long…

Hundreds have claimed to try and steal the jewel, but to no avail. You and your outlawed band of miscreants, The Rockboar Syndicate, are among the failed horde. After a vain attempt to break into the bank and steal the towns infamous prized jewel you now find yourself trapp’d in the sheriffs jail cell and sentenced to be hanged at dawn. With mortality drawing nearer by the minute, you and your fellow criminals decide to give the robbery one last shot. The sheriff has been called out to an ambush shooting just outside the town so now is your chance! Find a way to break out of the jail and make your way to the bank. The last train out of town leaves in 60 minutes and you want to make sure you’re on it – with the jewel in hand!

I’m usually quite disdainful of games that take you in blindfolded: I’m perfectly capable of not starting to play until the timer begins, and I’m not worried whether the wow moment happens as I enter the room before the game or at the very beginning. However, I’ll admit that here it worked well. The very act of walking into the space got me curious about the game and raised the sense of anticipation, and I wasn’t disappointed when I finally got to see it.

Red Rock is a beautifully decorated game which really captures the magic of the Wild West. If two cowboys had suddenly appeared from opposite ends of the set with Smith & Wessons ready for a showdown, I wouldn’t have been entirely surprised. They’d have to have reasonably good aims, though, because this set is huge. The room could easily fit two typical games, maybe three, and yet it didn’t feel bare. The space added nicely to the experience and particularly helped with the sense of exploration.

In fact, exploration is a big part of this room and, while the story wasn’t spelled out explicitly during the game, the actions we had to take were absolutely in keeping with the briefing (indeed, while writing this review I noticed another way in which it matched up). The aim is to break out of jail, make your way to the bank to retrieve your jewel, and then escape off into the sunset, all of which you pretty much do.

While it wasn’t quite at the same level as their other game, this felt like a far more physical room than average. Not in an arduous way but in the sense of being more “hands on” than most. That was particularly true of the opening, which felt far less like a series of puzzles than traditional escape rooms. Later it veered back towards more normal challenges, but that physical aspect never entirely left the game.

There were rough edges around a couple of those puzzles – one was hurt by poor visibility of a key element and another by a slightly temperamental mechanism – but these were small issues in the overall experience.

The ending of the game was a fun way to finish: with us metaphorically heading off into the sunset, jewel in hand. I’d like to have seen just a little more adrenaline in that escape. Perhaps running short of time is enough for most teams, but the gap between our final objective and the literal exit of the game was big enough that I felt they needed something extra to keep up the tension.

We escaped in under forty minutes with two clues along the way.

This was an expansive game with fun challenges. If you love the physical side of escape rooms, then I think you’ll have a field day at Trapp’d Peterborough. Pure puzzlers will still get plenty of enjoyment, though, as long as they don’t mind a little physicality along the way.

I’d recommend playing this as a group of three or four enthusiasts. You could complete it with two, but I think it’s sufficiently fun that you’ll want to share the experience (plus it would feel empty with just the two of you!).