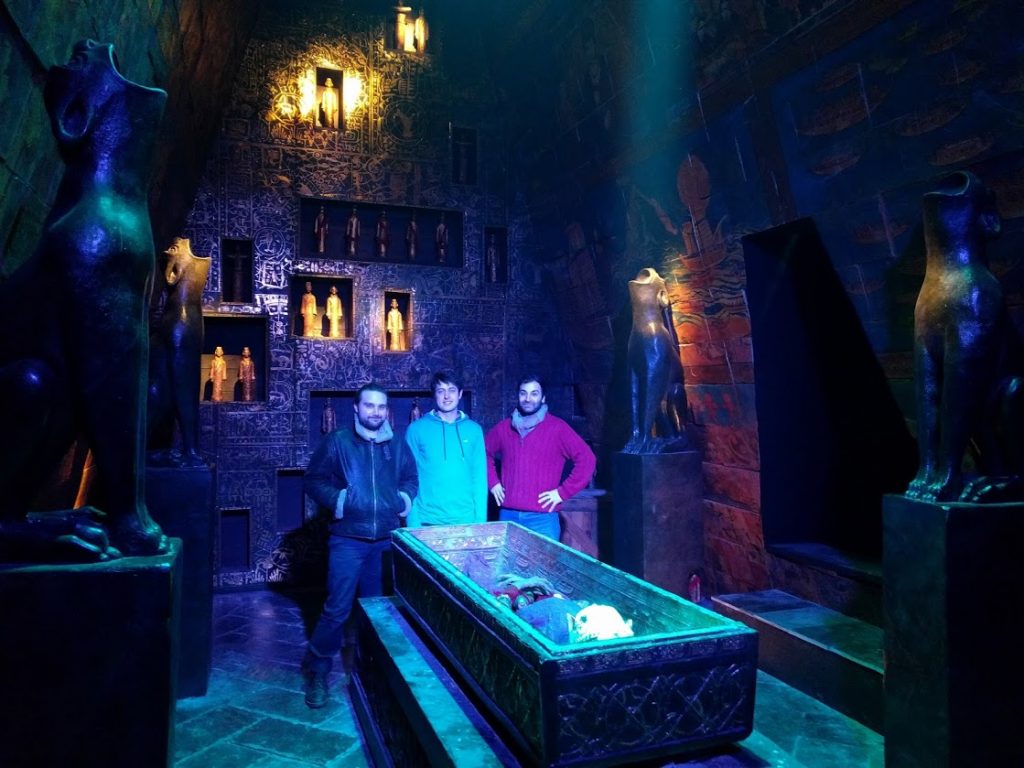 Clockwork Dog inside the Mother of Death’s tomb.

I’m often asked how I got into blogging about escape rooms. The simple answer is that I wanted to make sure that people got to play good games and that the best ones got plenty of custom. This game, however, is a bit different. Firstly, it’s only running for two weeks so, by the time you read this article, it’ll already be close to ending. More importantly, though, you can’t actually buy tickets to the experience – you have to either win them or be invited (but the competition is still open!). Fortunately, I got the chance to be a play-tester and, even more fortunately, as the last team of the day, we got to head back into the set and take a leisurely look round as well as chatting to the Clockwork Dog team, who created the game.

So what’s the point of this post then? Well, I really enjoyed the experience, and it felt a shame that so few people would get to try it out. In particular, I was sad that the enthusiast community would miss out on one of the most impressive experiences that have been built on these shores. If you want to see the inside of the game for yourself, you can watch a video with plenty of (spoiler!) highlights here. That takes you through the four main parts of the game in between comments from the lead, Alicia Vikander, and the director, Roar Uthaug.

And, yes, it really does include parts of the set from the film. At times during the game we found ourselves handling genuine film props, which I don’t often get to do in escape rooms (fortunately, we didn’t drop any…). Visually, it was stunning, with an attention to detail that only the very best games in the country can manage. I guess it helps when you can take the cast-offs from multimillion-pound film sets…

And if you’re going to enter the competition and don’t want to have the experience spoiled, then you should probably stop reading now…

The game starts with you being led down to the basement and told to wait until the door opens. It’s a good start – being abandoned in a big open space, not knowing what was about to happen, gave me a feeling of vulnerability that threw me off guard. When the door opened and we went inside, we were immediately accosted by the steward of Croft Manor who would lead us through our quest. Yes – this is an actor-led escape room which, in retrospect, makes sense: they don’t have time to let you learn how to play an escape room (and, for most participants, I guess it will be their first time), so they use the actor to help you through as well as aiding with the immersion.

That first room was a study inside the Manor, which you had to investigate to find out where Lara’s father had headed. There followed a series of puzzles that saw us searching through the drawers, books and maps around the room to find key pieces of information. As you can see in the video, the room was designed to look lived in and relied on a combination of clues being relatively prominent and the actor being on hand to guide you to the right next step, which he subtly did. He’d start with a general clue of how a piece of information was likely to be hidden, then draw you to a particular corner of the room and, undoubtedly, would continue to zone in on the clue until you made the right connection.

Next up, we were transported to SE Asia, where we had to get into the temple of the Mother of Death, tightrope-walking across a dangerous chasm before solving a couple of fun puzzles to access the tomb itself. It was an interesting transition, with the chasm through the middle of the space distracting you slightly from the puzzles, and then a somewhat surprising opening appearing when they were complete. Jumping straight from the study to the tomb itself would probably have been a bit extreme, and I thought this provided a nice compromise.

The tomb was the centrepiece of the experience, leaning heavily on the film sets and providing an incredibly spacious ending to the game. If you watch the YouTube video above, you’ll see a time-lapse video of them building the experience. The previous room had felt a perfectly adequate size, but it looks tiny when compared to its neighbour! It was here that things started to get really tense as the audio became more upbeat, our guide started to warn us that the sound we could hear was the temple collapsing and, finally, the floor started shaking. We rushed round the room like headless chickens finishing the puzzle before making a hasty escape through a convenient hidden passage the opened at the back of the space.

Game over, surely? Well, not quite. Right back at the beginning we’d been asked to put on a harness. I had a couple of ideas of what that might be about, but it was still a fun ending to the game. After crawling through the passage, we arrived in a small space that they were flooding with fog. By the time I took my place as the third person in our group, I could barely see the floor beneath my feet, let alone what we were about to do. I was pretty confident that it would be a ziplining end to the experience, but the effect was still impressive as we flew out of the fog, accelerating downwards, and were greeted by balls of flame spraying from the ground.

The entire game lasted a mere 30 minutes, but they’d packed in more than you get in most escape rooms. Four different spaces, a bunch of high-quality puzzles, amazing decoration and an experience that I’ll treasure for a long time to come. I only wish that more enthusiasts would get the chance to try it out too…

Full disclosure: Unsurprisingly, we weren’t charged for this experience. You can read more on the About page.