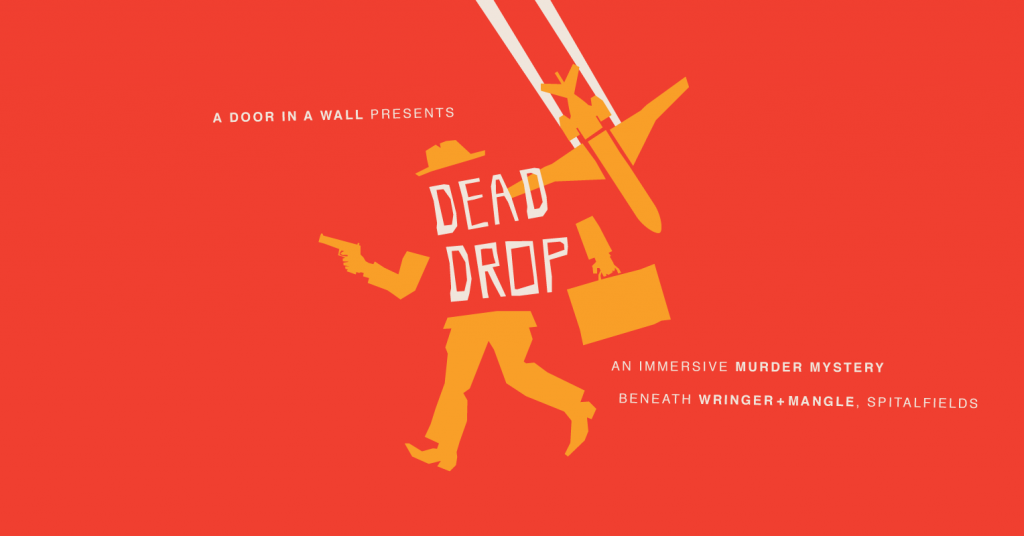 There are few things in the calendar that I look forward to as much as A Door in a Wall, so it was tantamount to cruelty when they released their latest game, Dead Drop, as a beta last year. Tempted though I was, I opted to bide my time, skip the test phase and wait several months for the finished product.

This was a departure from their traditional model of running a month of daily events and consequently doing the beta testing late on with little chance for significant changes. While the delay may have frustrated me a little, I thoroughly approve of the move. It means a better tested, more polished game, an extended range of dates to organise friends and an opportunity for word of mouth to have more of an impact on ticket sales.

This time round they’ve chosen to base the game in a Spitalfields bar where you have to investigate the mysterious death of Anne Tenor. Longtime fans will be pleased to know that they’ve stuck to their usual format, with three suspects, a variety of trails to follow, plenty of puzzles, a bunch of character interactions and, of course, a full serving of puns.

Being inside changes the dynamic a huge amount. It’s almost impossible to have subtle clues around the space – few of the teams were surreptitious in their investigations and, on a couple of occasions, we had to make a conscious effort to avoid having puzzles spoiled for us. Pleasingly, most of the time that wasn’t an issue, which was a marked improvement on A Veiled Threat, their previous indoor offering. In terms of quality, I’d say the puzzle quality was at the upper end of their events. Don’t expect anything to be properly hard (if you want that then head to Puzzled Pint) but they were logical and included several that I could happily imagine in an escape room.

Being indoors also made us much more aware of the inevitable queuing in the game. When you’re outdoors, you can slow down if you’re catching the team in front, but indoors you have to stand close by or someone will jump ahead of you. Having said that, the good thing about being indoors was that, when we did hit a queue, we could easily skip across to a different puzzle trail or take the time to discuss something we were stuck on. The end result was that, although I was aware of queuing throughout the evening, it never came close to frustrating me. I rarely waited more than a couple of minutes for my moment in the spotlight.

Yes, as ever, I revelled in the character interactions. I mentioned in my review of their last event that the quality of acting wasn’t up to their usual level. No such problem this time round, with all the actors giving good performances and plenty of variety in the characters they’d chosen. If I had one complaint, it was that they lacked the truly outlandish parts: most of the interactions felt pretty vanilla to me – enjoyable and fun at the time but perhaps lacking those silly elements that help to remind you not to take the game too seriously.

And what about the plot? Well, it was as convoluted as ever while still retaining the solid logic that sets them aside from other murder mystery events. At times, the clues were incredibly subtle, and there was plenty of information to process but, between the three teams we took along, we found all the relevant information and answered every question. Individually, we each missed clues and connections, which suggests to me that they’ve got the difficulty level about right; it’s tough to get everything but few teams will wash out entirely.

As ever, they wrapped up the evening with an extended scene that brought all the actors together, recapped the story, pointed out the clues we might have missed and set everything up for the grand reveal of the guilty party.

After the slight dip of Horses for Corpses (their 2017 Camden-based game), it was great to see them bounce back to their usual high-quality performance. The game ran better than any previous ADiaW production that I’ve been to, with high-quality puzzles, great acting, a beautifully convoluted storyline and, as always, their trademark puns.

If you’re looking for a good night out, grab some friends, book your tickets and head down to Spitalfields for an evening of mystery.