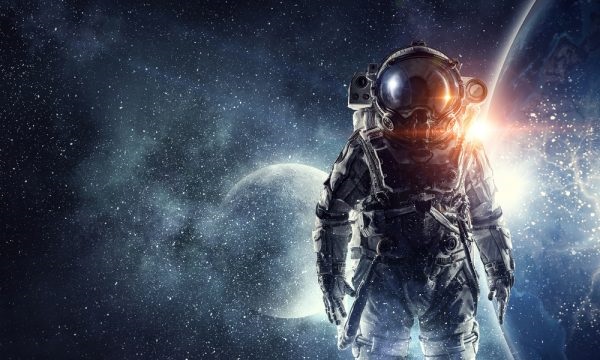 AI Escape pride themselves on building rooms where the story isn’t just layered on top but is right at the heart of the experience. After the melancholic Leo’s Path and the thought-provoking Kill MAD, which took on the sensitive subject of mental illness, this time round they’ve set their sights on creating an epic science-fiction game. Few companies have the audacity to create games longer than an hour, and fewer still would dare do that in London, but AI Escape aren’t a company that chooses the easy path.

It’s a cosy little venue, hidden among the morass of buildings that make up the Biscuit Factory. If you’ve not been before, I recommend paying attention to their email instructions, because it’s not the easiest area to navigate around (and be warned that there’s a second escape room venue on site!). As ever, we were warmly greeted by the owners, Kou and Yan, not to mention their beautiful Samoyed, Coco (who’s well known in enthusiast circles), before we were briefed and sent into the room.

In 2052, you have been recruited to join Rainbow Galactic’s team of astronauts under the Project Ðelta Agreement. Your mission is to fly onboard spaceship Venus and carry biological experiments on other terrestrial planets to achieve space colonisation through genetic engineering. Will you be able to revolutionise the entire human race or will the project’s dark secrets consume you first?

Project Ðelta is a room where discovery is central. Not only do you need to explore the spaceship and work out how to interact with the game, as you might expect, but you need to discover the story as well. The central mission of the experience, which you’re told before entry, is to find out who you are and why you’re there. That gives it a very different dynamic to most rooms, because the story is absolutely integral not just to the experience but to your result. It’s likely that how you feel about story generally will be central to whether you enjoy this room.

Absorbing information while under the clock is tough, which probably explains the other thing that’s unusual about Project Ðelta: it’s a 100-minute game. I didn’t think that would be a big deal but, coupled with the story element, it felt a lot more intense than an average experience. This is definitely a game that’s best played when you’re feeling fresh.

But enough about what makes it so very different. How is it in terms of the more usual aspects of escape rooms? First things first: AI Escape have done it again in terms of delivering an impressive-looking set. They’ve captured the futuristic space theme well and, while it was a little more minimalist than I’d have liked (it certainly isn’t a search-y game!), everything we encountered fitted the world well. We’re not just talking decoration – much of the ship was interactive, with puzzles embedded into the set in a satisfying way.

Those puzzles were on the harder end of the scale, but not so much as to feel unreasonable. The solutions felt logical and, on the one occasion where I felt it was just a little too involved, both my teammates disagreed and appreciated the extra effort. Be warned, though: if you’re more about adventure than tough puzzling, you’re likely to need several hints to get you through. One puzzle in particular took us close to twenty minutes from first sighting to eventual solution.

One element in the gameplay felt a little too close to being a computer game for my liking. While it required teamwork and interaction with the set, I couldn’t get away from the fact that I’d played many computer games based on the same core concept and I’d enjoyed them far more than this. It felt like taskwork – designed to fill some minutes rather than exercise your brain.

As with AI Escape’s other rooms, this is a very linear experience. Knowing that going into the room, we stuck together and, as we’d found on previous visits, saw its linearity as a positive aspect rather than a detriment. With harder-than-average puzzles, we found ourselves talking more during this game than almost any other I can remember, and that was certainly a good thing. If that linearity worries you, it’s worth pointing out that, within the individual puzzles, there were often multiple parallel steps to the solution which you could share across the group.

The game progressed in what was effectively a series of scenes that told the story. With each new scene there was usually an impressive and exciting transition that showed us a new part of the ship or let us look at an existing part in a new way. This isn’t a huge set, but it’s used well to give a feeling of exploration. Add in some theatrics (the best of which we managed to entirely miss!) and you’ve got something that has a strong feeling of adventure rather than just puzzle-solving.

The finale was a little weak in my opinion, but I think that’s partly down to the game mechanic. There can’t be a sudden and exciting ending because the last thing you need to do before leaving is agree on what’s happened with your teammates. It’s not a flat ending, though – expect some elements of surprise as you reach the end of the game – and the discussion proved to be an enjoyable part of the experience that reminded me of the ending to one of my favourite London events, A Door in a Wall.

We escaped in around eighty minutes having received two or three clues along the way.

AI Escape continue to avoid mainstream games and create experiences that challenge their players on multiple levels. I absolute enjoyed Project Ðelta a lot, but I felt the story angle was just a little too complex to put in a high-pressure game, and I’d have preferred a smaller number of easier puzzles. Those are relatively minor criticism of what was a very strong experience – and certainly one of the best in London. It’s perfect for sci-fi fans, players who enjoy story and any enthusiasts who just want to have a longer experience!

We went as a group of three, which I think was perfect, but you could certainly take a fourth and not be too worried.

We ate in Poppy Hana, a Japanese restaurant near Bermondsey station where we’d eaten before – it’s the most interesting option in the surrounding area, with good food and service.