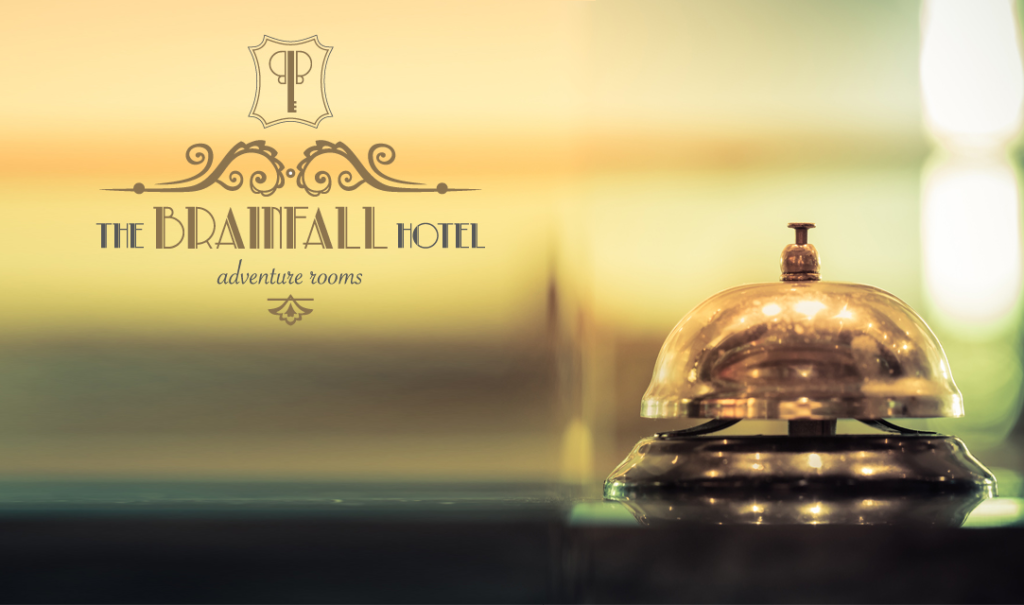 The Brainfall Hotel is a gorgeous venue. In fact, the beauty of its reception made us wonder whether it might once have been a real hotel and created anticipation before we even got near the game itself. All three experiences here are themed around Alice in Wonderland, last ninety minutes and contain at least one actor. Unfortunately, we didn’t have quite enough time to play them all, so we’d chosen to play the two that came most highly recommended, Down the Rabbit Hole and Dark Seas. There’s a natural order to these games, so our choice resulted in minor spoilers about how the interim game might end. If you get the chance, I’d therefore recommend playing all three in chronological order for maximum impact.

Both Down the Rabbit Hole and Dark Seas were fun experiences with gorgeous sets, but we found the actors didn’t really add to the experience. In Down the Rabbit Hole, the actor got a bit repetitive, while in Dark Seas, they weren’t very relevant other than as a clue system and some additional theatre. I think the trick with both games is to go in expecting something that blends immersive theatre with escape rooms, and you’ll have a better time. The former game had better puzzles, but the latter had the better set.

Down the Rabbit Hole

Down the Rabbit Hole starts with the team split into two groups and immediately throws you in at the deep end with some tough communication-based puzzles. We really struggled through those opening challenges before eventually shouting our way to success. I found that quite surprising, because it was the very start of logically the first game at the venue, and I’d have thought they’d ease you in gently. That’s not to say the puzzles were unfair: only one really felt like a letdown across the entire game, and the overall experience from a puzzling point of view was pretty good. The other frustration was with the searching, which we found – particularly towards the end of the game – took way too long compared to the puzzle-solving.

The first thing that strikes you, though, is the set. They’ve created a beautiful, meandering space with plenty to investigate and explore. It’s cartoon-esque, with big, bold imagery that’s reminiscent of the Alice stories and gives a cartoony feel to the experience. There are corners to explore and an interesting layout and, although that cartoon feeling holds throughout, it still manages to create quite different vibes between spaces.

The thing that most sets this game apart from others is the inclusion of an actor in the room. The actor’s involvement in the game fits very well with the Alice story: as the description says, “… nobody knows what he’s feeling! Not even he himself”. While that was a cool idea in theory, we found that it was overused. I know three teams that have played this game, and all three got frustrated with his interactions in some way. In my opinion, if you’re going to use an actor in a game, you have to treat the interaction like a puzzle. That means focusing on the fun and aha moments. Too often this felt more like simply a lot of dull taskwork. Had he appeared more fleetingly within the story, or had the interactions been more varied, I think I’d have thoroughly enjoyed his involvement. Having said all that, one of the best ideas in this game relied on him being present, so there are definitely some positives.

Fortunately, the actor doesn’t harass you all through the game, and you get a decent run at the end sequence of puzzles. That gives a satisfying conclusion to the experience although, with the big set and theatrics of what had come before, I did feel that they could have finished with a touch more excitement.

Dark Seas is a phenomenal set in terms of both size and decoration. There’s a tremendous sense of space when you’re inside the room and a real feeling that you’re being transported to another world. It’s certainly well decorated in the details, but it’s in the grand vision that they’ve really excelled. The space manages to convey the feeling of being aboard a ship, and they’ve created an entrance to the experience that provides a pleasing transition from reality to the game world.

Within the experience, you soon encounter the actors which are a standard part of the Brainfall games. How you get on with them is very much down to how you cope with immersive theatre. For some in our group, they were a clear negative. I personally enjoyed the interactions when they were unrelated to puzzles but found that their involvement in the challenges was a little bit heavy-handed. At times, they used human interaction to determine if we’d solved puzzles correctly, which reduced my enjoyment. For me, it took away some of the excitement of inputting the answer and having the immediate feedback confirming that we were correct. Secondly, there was a tendency for them to follow us around a bit and interfere with what we were doing. I guess I don’t like solving puzzles while people are watching me!

But what of the puzzles themselves? I didn’t enjoy them nearly as much as I had in Down the Rabbit Hole. They weren’t bad, but they were a little more basic. One, in particular, felt like they’d taken one of the dullest tropes you can find in an escape room and applied it to the game in a way that took away from the grand nature of the set. Others were more about the theatre than the challenge itself. Indeed, perhaps that was where this game fell down: they’d chosen to replace puzzles with theatre, and that trade-off didn’t work for me.

Where Down the Rabbit Hole struggled at the ending, this game delivered a strong, clear finale with some adrenaline and a memorable exit.