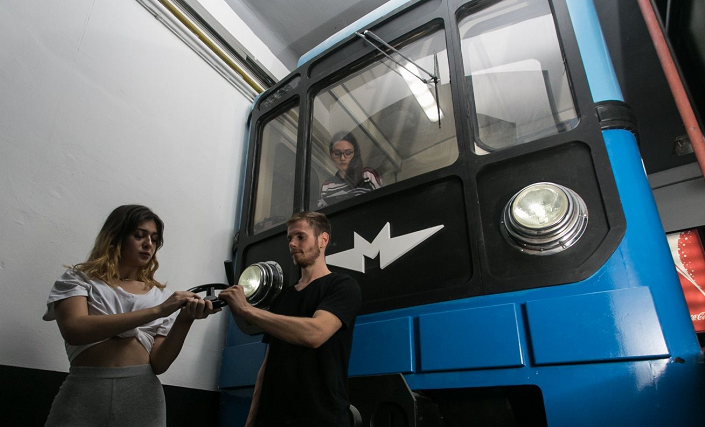 On our last visit to Budapest we’d played five rooms at Locked.hu, a well known venue in the city. It was clear from the games that they’d gone through a huge learning curve – their oldest experiences disappointed us, but their newer rooms were impressive, particularly from a decoration point of view. AROOM is a premium offering from the same company, promising cutting-edge games.

Inside the venue, it looked like a fairly standard company, at least until it came to locking away our belongings, where they have personal “safe-lockers” for each player, complete with your own choice of code. To be honest, that’s a somewhat pointless feature, but it does highlight that they’re aiming at the high end of the market. Note that we only played one of their games (we didn’t know how good they’d be and we had limited time), but they also have The Heist and the House of Escobar at the same venue.

Metro isn’t a huge game, but it’s big enough, and they’ve packed plenty inside the space – more than sufficient to give a sense of journey to the experience. It’s well presented, with a crisp feeling – bold colours, clean edges and a general sensation of being in a shiny new escape room, something that many brand new games fail to manage. Even better, it’s a pretty room with plenty of interesting detail and, in several cases, they’ve embedded the puzzles within those features rather than just layering them on top. Right from the moment we walked in through the door, it was obvious that they’d raised the bar compared to the games I’d played at Locked.hu.

It’s a relatively linear game but not one where I felt like we had to play in each other’s pockets. As soon as you’re in the room, there’s plenty to investigate and discover, and they’ve achieved a reasonable balance between hinting at what you should do next and making it blindingly obvious.  On one or two occasions, signposting was lacking, and we found ourselves wandering somewhat aimlessly round what was – admittedly – a pretty enjoyable place to explore.

On top of that sense of exploration, they’ve added in some theatre, which ramps up the tension at a point where I thought we were pretty much done. It’s an interesting technique which worked well by catching me off guard. Game elements are most impressive when least expected.

As you progress towards the end of the experience, there’s a fun and frantic finish involving multiple members of the team in a simple but effective challenge. It’s probably particularly tense if you’re short on time but, even with the 25 minutes we had left, it raised adrenaline levels. That’s always a good way to reach the end sequence, although it was somewhat offset by an abrupt ending that left us not entirely certain we were finished. That was particularly noticeable here because the reception is a short distance away from the actual game, so there’s a big gap between finishing and getting congratulated by the GM.

We went as a three, and that worked perfectly. Enthusiasts probably won’t want to shift to a larger team because of the relatively linear feel to the experience, but you could certainly head along as a pair.

That’s all on AROOM – want to read more about other local games? A link will be added here when the summary article is published at the end.