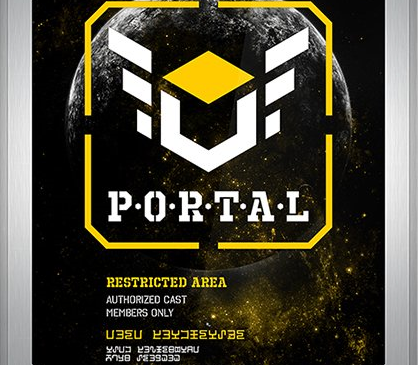 Mindquest is an interesting company. They’re home to one of my favourite games (Legacy of Noo’Zaca) but also to some poor games, and the GMing is inconsistent to say the least. They’ve also sold their rooms across Europe, and I’d played several of them on a trip to Paris, narrowly avoiding re-playing a couple which had been renamed. Given that experience, I should have been much more careful about what I was booking, but I’d never played a game called Portal, so I didn’t really give it much thought.

Victory Escape Game’s Interstellar, though, is another matter entirely – that’s an experience I have played and it turns out it was imported from Budapest. So yes, for the third time in my playing career, I found myself in a game that I’d already played at least part of, albeit with a different team. It was an interesting feeling because, having played as a four the previous time, there were huge swathes of the game that had been done by my teammates and that I could still take part in this time round. Inevitably that wasn’t true of the most interesting and tricky puzzles, which had been completed on the previous outing by the whole team together and where, this time around, I was left to watch on as my new teammates (who fortunately hadn’t played the room before) got to experience the game to its maximum.

Portal isn’t the prettiest game in the world. They’ve opted for a futuristic concrete style that, while possibly remaining faithful to the military research station theme, means you’re unlikely to look around in wonder when you enter. On the other hand, they’ve dropped in various pieces of intriguing equipment that go some way to bridge the gap. Ironically, Portal isn’t a game that you should play for a sense of exploration, but they’ve done a reasonable job of creating a memorable transition during it which fits with the experience and hints at you being inside a much bigger facility than you really are.

So we found the scenery OK, but there were two big problems with this game: red herrings and lack of signposting. There were lots of random props with intriguing controls around the space that played no active part in the experience, and at times I found myself halfheartedly playing with buttons and switches to see if they triggered any action. It wasn’t clear to me whether we were just meant to know the right equipment to investigate or whether we had missed some signposting, but the inevitable result was that we got frustrated and by the latter stages of the game we were probably asking for clues when we still had a chance of solving the puzzles at hand.

Those red herrings clearly weren’t a fundamental part of the experience – they weren’t present in Paris – and I got the feeling they’d just grabbed machinery to fill space with the resulting confusion an accident. Had they been a little more careful and picked items with fewer interactive parts, I don’t think the lack of signposting would’ve been such an issue.

It felt like there were a smaller than average number of puzzles across the room, with a tendency to rely on the game’s made-up languages to fill your time. One puzzle did impress me (both times!), although slight issues with precise colour matching took the sheen off. Sadly, that uninspiring feel wasn’t improved in the finale, which involved a somewhat arbitrary puzzle that you’re likely to either know the trick for or not. I’m torn about those at the best of times but, either way, I think it’s a disappointing way to finish.

All in all, this was a pretty mundane experience. It was good enough to scratch the escape room itch but in Budapest, there are plenty of better options. If you’re going to head along, then three is probably a good number of people to take – there’s not enough to keep more of you happily occupied, but you’ll want those extra eyes to track down the clues.

That’s all on MindQuest – want to read more about other local games? A link will be added here when the summary article is published at the end.