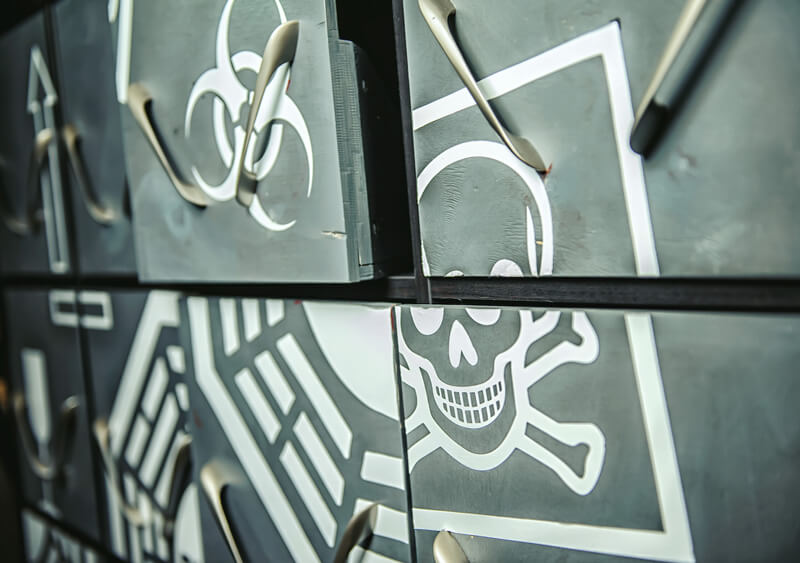 Having just played City Mazes‘ Bamboozled game, it was straight back in for the second round: The Lost Cabin. There are quite a few games in the country with a Cabin in the Woods theme, so it would be easy to think that the key word in the title was ‘Cabin’ but, in fact, it’s ‘Lost’. This game takes its influence from the popular TV series, in particular the industrial lab facilities that dotted the island.

I believe both games at this venue are from the Russian design company Indestroom, so it’s worth bearing that in mind if you ever play games on your travels.

Day 74 on the Island. Last week on a scavenger hunt, you saw a Cabin in a clearing that had never been there before. The day after when you went to show your people…it had gone. Did you imagine it? You can’t have. You just woke up in it. How do you get out?

In contrast to the slight nature/jungle theme of the previous game, the Lost Cabin is full of industrial tech. The theme here is far more pervasive, and I was keen to explore the space and find out more about the story. If you look closely, it’s not hard to notice the shortcomings where the set isn’t as polished as it might be, but at a quick glance it does the job well.

That lack of attention to detail was a running theme in the game, with a couple of puzzles suffering from ambiguity because the design didn’t quite match the set. We spent a fair amount of time trying to solve one because it didn’t quite register the positions in which we’d placed things, while another one left us with a set of ambiguous solutions that we had to tediously work our way through.

With the industrial theme, they’ve not shied away from using very obvious tech in the room. I have no objection to that, especially in a room like this but, if you do, it absolutely has to work. In this case sometimes it did, but too often it didn’t and, when that happened, it got frustrating. One particular case was, to my mind, a cardinal sin: batteries running out. There’s a particular prop in this room which must run down its batteries pretty quickly, so I can’t believe they don’t just fully charge it for every game. The result was that we suddenly had our immersion broken at a critical moment, as we first had to try to deal with the failing prop and then call our GM into the room to fix up the problem.

The irony of it was that this use of tech was almost entirely gratuitous. For me, it didn’t add anything to the game. Worse still, it’s the sort of thing that excludes all the other players while it’s being used, so we ended up with two people just standing around waiting while the other person investigated the puzzle. That would have been bad enough in itself, but there was another place with a similar piece of tech that caused similarly frustrating experiences.

The central mechanic of this game, which will be familiar to fans of the TV show, was a nice way to end the game, although even then there were a couple of moments where a lack of attention to detail (or a lack of caring about ambiguity) left us a bit confused.

This game had some promise but was let down by the lack of attention to detail and a use of tech that took more away from the game than it added. Remove the tech and tighten up some of the solutions, and I think you may get a solid game. However, as it is, I’d head elsewhere in London where there are plenty of better games.

As highlighted above, even with three people there were several frustrating moments where only one person could effectively contribute. Officially, the game allows up to eight players but, if you want to head along, I wouldn’t recommend more than four, and if possible I’d suggest you stick to the bare minimum.

We ate in OA Comtam, a delightful Vietnamese just a couple of minutes’ away from the venue. Everyone enjoyed their food but personally I can recommend the chicken bun xa.