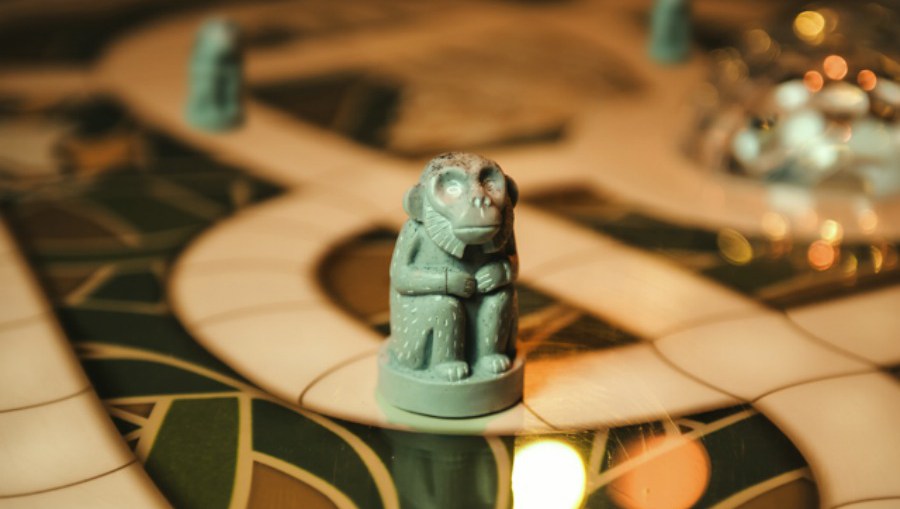 City Mazes have been around for a couple of years now, but it’s taken a while for their London expansion plans to come to fruition. After looking at a number of sites, they opted, funnily enough, for one that’s pretty much right next door to Enigma Escape. Some might say they’re saturating the local market, but I’m of the opinion that a rising tide will raise all ships, and there’s always the opportunity to send customers in each other’s direction (or even split them for bigger events). All that would rely on the quality of the experience, though. So how would it stack up?

First impressions were reasonably positive. Their reception is quite spacious, and they were pretty welcoming to our group. Seeing them later on, it was clear that they’d built up a decent rapport with the other groups we saw in the venue.

After playing a mysterious board game that you found in your attic you’re somehow transported into a jungle world! The only way to escape is by completing the game in 60 minutes or less! Will you be able to finish it before whatever is lurking in the wild finds you?

Our first experience in the room was being given a series of instructions by the GM. “You’ll need to follow these steps, then do that, make sure you don’t do this, and here’s where you should start…” Some of that was probably dealing with a lack of direction in the game that might result in players heading down in entirely the wrong direction, but we were also told some things that were absolutely clear if you took the time to look. I suspect that bitter experience had taught them to direct people to the start of the puzzle, but a better approach (in my opinion) would have been to let people do some exploring and then point them in the right direction if necessary. Arriving in an escape room should be exciting, and the last thing you want is to hang around while somebody tells you what is, essentially, a set of rules.

That aside, first impressions were reasonable. There was a (pretty basic) jungle theme adorning the walls, a few things to investigate (although really not many – this is most definitely not a searching room) and – the thing that carried the entire game – a pretty centrepiece. Now, if you’ve ever watched the film Jumanji, that board will be more than a little familiar, as will the playing pieces on it. That’s a shame because, beyond the general concept of being trapped in a board game, they really don’t reference it at all, so it would have been easy to create a conceptually similar game around a different theme.

The story of this game revolves around completing the board game, and nothing else really happens along the way. It’s an effective mission, though: you have a very good sense of progress, you know what your goal is, and there’s a simple repeated mechanic which rewards you when you do things right. It’s great to see a centrepiece prop/puzzle that really does underpin a game and that works more or less consistently.

The game did have some shortcomings, however: the first puzzle we happened to “solve” gave us the correct solution for the wrong reasons. That left us with entirely the wrong idea about how the game should work, and we ended up bashing our heads against a metaphorical brick wall for a while. According to the GM, that wasn’t an unusual issue, so it’s a shame they haven’t done anything to improve matters a little. That’s one of the perils of a bought-in game: there’s far less willingness to meddle in its mechanics.

The puzzles were generally OK: no massive leaps, and the biggest problem we encountered was with some props that were so worn (after only a couple of months of being open) that they made the puzzle unnecessarily difficult. I think they’d do well to rethink either the props or the puzzle to avoid this issue, as additional difficulty due to worn props is likely to annoy customers.

The game is not quite linear, with teams generally having a couple of puzzles to work on in parallel. Given that they allow ten people into this room and there’s next to nowhere to search, that’s likely to result in some people feeling more than a little left out.

As the game progressed, I felt the puzzles improved slightly but, at the same time, the level of decoration waned. The game does at least wrap itself up nicely, though, with a finale that’s exactly what you’d expect.

We escaped in around 45 minutes having taken a single clue on a pretty spectacular search fail.

Bamboozled delivered an acceptable quality on all fronts while never really managing to excel in any of them. It isn’t a game that you’re going to travel across the city for but, if you do head along, I don’t think you’ll hate it either.

Officially, it’s for up to ten people. To my mind, that’s ridiculous. There was barely enough in there to keep three of us occupied. I definitely wouldn’t take along a team of more than five, even if everyone is a beginner.

We ate in OA Comtam, a delightful Vietnamese just a couple of minutes’ walk away from the venue. Everyone enjoyed their food, but personally I can recommend the chicken bun xa.