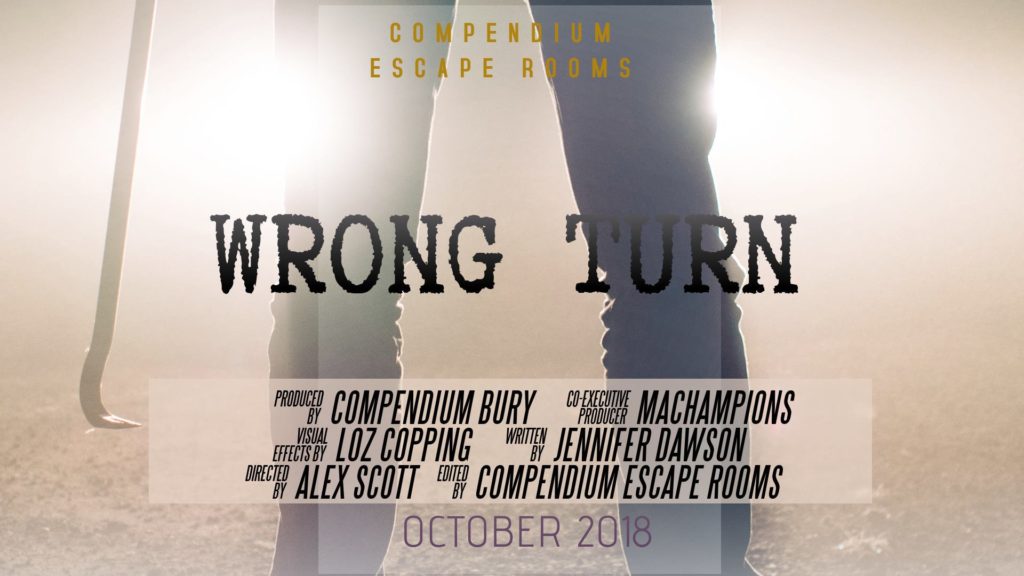 Compendium is a small venue that opened late in 2018 with a single game, Wrong Turn, and recently opened its second room. Set right in the heart of Bury, it’s got a simple entrance but, once you get upstairs, you can see there’s more to the company than meets the eye. The game itself sees you plunged into small-town America, where your car has run out of fuel, and you head to a local farmhouse for gas.

Wrong Turn has an impressive set. Right from the start, they’ve produced a realistic world where they recreate a hillbilly house from the deep south. The decoration is of high quality throughout, and they’ve gone to a lot of trouble to make this a believable location. An extra touch on top, that I found worked particularly well, was the music track they played during the game – the slow numbers giving you a feeling of being in a lazy backwater where time has stood still.

The downside of that attention to detail is that there are a lot of red herrings in the game, and so much to investigate and search. They’ve stuck as many things down as possible but, despite that, there is still a huge amount of investigation to be done for very little payoff. For us, it also meant that, every time we got stuck, we were left wondering how best to proceed. There was always more searching we could have done, with the result that I found myself circling the room a little aimlessly, feeling like I should persevere but not really wanting to.

Most of the puzzles felt fair once you found them, but almost all of them were a little too straightforward. The one exception to that was a puzzle that left us confused for other reasons. I suspect it leaves most teams feeling a bit frustrated, although it did highlight that the GM knows when to jump in and offer help to players. On every occasion that he jumped in, it felt like he’d chosen the right moment to offer help. There was a tendency to direct us to the exact spot when we’d had a search fail, but that was fine by us – we were more than happy to shortcut our searching.

Transitions were the other place where this game shone, with each new space we encountered engaging us. At times we were surprised by the move to the next space; at others it was more obvious, but the next room always drew us forward. That continues through to the finale, which is a surprise that will create a frantic end to the experience – particularly with larger teams. It’s the perfect ending if you’ve got only a couple of minutes remaining, but be warned that, if you’re down to the dying seconds, you may find it a lot less enjoyable!

Wrong Turn has a very well produced set, with fun transitions that capture the feeling of a remote and scary farmhouse. For me, the number of red herrings, the feeling of having to do a lot of searching for very little payoff, the simplicity of the puzzles and the confusion over what we were meant to do next took the edge off the experience. If you’re into scary games, then the realism of the space may mean you thoroughly enjoy the experience.

Our team of two escaped with just over ten minutes to spare, having taken three clues.

We ate just along the high street in La Dolce Vita. It’s a great-value Italian restaurant if you’re looking for a quick meal.