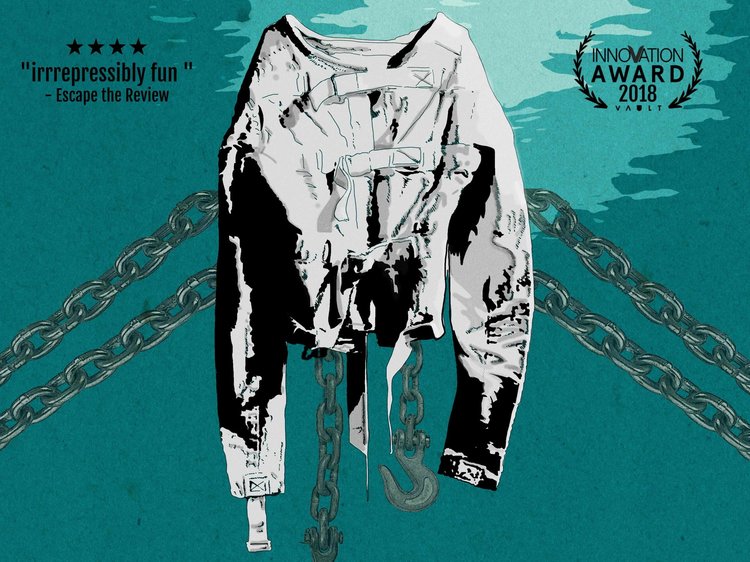 Mostly Harmless is getting to be quite an experienced company having run a game at the Vault Festival last year and followed that up with the charmingly quirky Phobos 17. Their latest installment sees them moving away from the lighthearted sci-fi themes of their earlier games and taking on a darker story about a magician, with a suggestion that the freedom you’ll be chasing is not just physical but psychological in nature.

As with last year, they’re not in the main part of the Vaults but just at the other end of Leake Street. There are no signs of the game there, though – you have to head to the front desk and then be taken down for your booking. Check-in done, we were soon greeted by our in-character game hosts and ready for the room. For what is just a half-hour experience with four players at most, two GMs seemed a little overkill, but it got us moving into the game quickly. That may seem a given but, as the name strongly hints, this experience turns out to involve one of your players getting into a straitjacket, so having two GMs made things a bit easier.

Escape the Jacket is not a big space. In fact, it may well be the smallest I’ve ever played in. Add to that the fact that as a pop-up they couldn’t really do much by way of permanent decoration, and you’d be forgiven for thinking that the scene would be underwhelming. In fact, they’d managed to avoid that through the clever use of a projector and audio to create a good atmosphere for the game, some interesting props scattered round the space and, of course, having one of your teammates in a straitjacket! In spite of the minimalist feel to the room, it actually conveyed the scene really well.

For thirty minutes, there’s a surprising amount of fun puzzling to the experience. Yes, some of the challenges were variants on tropes, but there were a couple of novel puzzles and some that were great fits for the magic theme. People talk about “showing, not telling”, and here they went to the next step by getting us to act out the theme. For me, that’s far more powerful from an immersion point of view than all the decoration and story you can put into the game.

We zoomed through the opening puzzles a little too easily, but I think that reflects the fact that the vast majority of players will be new; that, with only thirty minutes to “teach” people how to play, you can’t challenge too much; and perhaps that, given the venue, some players may be a little merry… In some sense, they were hurt by creating such logical puzzles in a minimalist space. There weren’t many potential clues and, as we rapidly overcame challenges, we quickly narrowed the pool of clues that remained.

All in all, though, I was having a fun time. The problem is that this wasn’t true for everyone in the team. One team member was in a straitjacket with relatively little to do. They’d made a decent effort to ensure that that person would be as occupied as possible, but there’s a distinct limit to what you can do when you’re unable to investigate anything for yourself. The confined player is left at the whim of their teammates, always seeing puzzles second and with relatively little agency in terms of deciding which ones to work on. They’re likely to stay restrained for the vast majority of the game, so there’s a significant chance they’ll get frustrated by the end. That game asymmetry will likely result in some enthusiasts  getting particularly frustrated, although I’d imagine that less experienced teams are likely to have fewer of the “instant solves” that exclude the trapped player.

In spite of that, the general feeling to the game was that it was quite good for larger teams. This wasn’t the linear room I’d expected but had multiple puzzles in action until pretty much the end of the experience. We got stuck on the penultimate one for a very long time, in part because we had rushed through the start of the game, so they were content to leave us stuck for a while. When we finally solved it, I didn’t feel we’d been particularly stupid. It was a really nice idea, but the link we had to make felt like it wasn’t quite crisp enough in a couple of different ways.

The escape from the straitjacket provides a simple but frantic ending to the game. On top of that, they have an upbeat end sequence on the projector, with the GM jumping in soon afterwards to keep that buzz going once you’re out of the room.

Escape the Jacket is a fun room that is well suited to the Vaults, with the major flaw being the centrepiece of the game: the straitjacket. If you can cope with one player being a little less involved, then I think it’s a good experience. In spite of us escaping with only five minutes remaining, I’d class this as a pretty easy room, as we were stuck on a single puzzle for half the game. Three players was probably the right size for the experience.