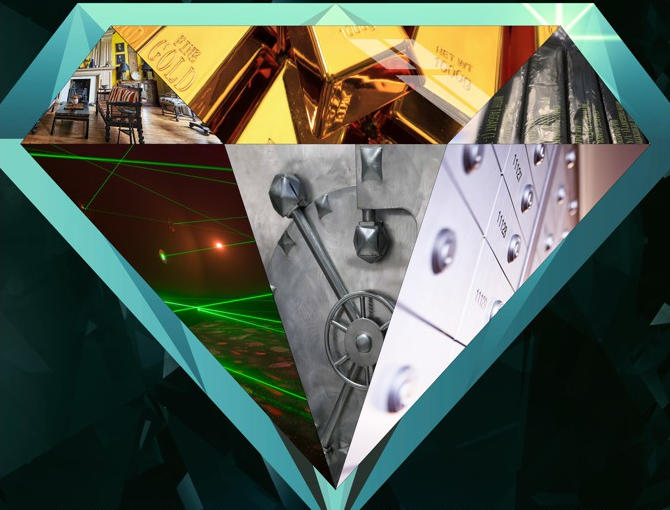 Cryptology has been experimenting for a while with how to make games that keep enthusiasts occupied for just as long as inexperienced teams. Their previous two games had done a good job on that front, but with Daylight Robbery they were aiming to push that approach to its limit, creating a game which they didn’t expect any teams to be able to complete. Ambitious? Yes, but with plenty of risks of going horribly wrong…

The premise of the game is simple: break into a bank and steal a diamond. That, in effect, is the escape condition. Beyond that, there are other valuables you can steal, which provides the variable challenge. In principle, you should be solving puzzles until the very last minute of the game.

Before you’ve even started, they set you on the right track by taking you deep into the basement of the building. That adds to the feeling that you’re entering a secure space. And with good reason: this building used to be a bank, and the space the game is set in was the vault. It’s not just that, though: before you start, you’re given tools to help you break into the bank, which helps get the immersion going before the clock even starts ticking.

Inside, it’s well decorated with plenty to carry the game theme. Even better, they do plenty to pull you forward in the game – giving you hints about what lies in front of you that meant I was always excited about what lay ahead. Which is good because there’s so much to do in this game that you need to be moving forward as quickly as possible.

For me, there are two places where this game shines. The first one was the puzzles. I can’t begin to imagine how many different challenges there are across the experience, but I know I was solving as fast as I could for the entire time and there was plenty left behind. And, in contrast to several other heist experiences I’ve played, these were good puzzles. Some were easy, some were hard, some were damned near impossible. I never felt anything was unfair, though. The style of the game also permitted them to be quite varied in ways that other rooms usually stay well clear of. One example of this was a series of maths puzzles that some players would have found off-putting. But it’s simple here: just move on to a different challenge if one isn’t to your liking. Plenty of the challenges involved physical interactions with the game, including one of my favourites, which was evilly tough and involved extra depth that was easy to miss if you dived in a bit too quickly.

The other part of the game that really shone for me was the sense of being in a heist. You’re not just collecting a series of coins, wodges of notes or poker chips. Here, you’re collecting physical items and carrying them to your swag bag, which really helps deliver the sense of excitement. Every time I solved a puzzle, I rushed across the space to drop my ill-gotten goods in the bag. It was like a mini victory lap to revel in the glory of each achievement.

One danger of the “collect as much as you can” games is the lack of a true finale. You’re left solving puzzles till the timer stops. To counteract that, there’s still the task of retrieving the diamond, which you’re likely to reach late in the game. That ensures you have a(nother!) burst of adrenaline just as the timer starts to run out. Of course, the downside is that, when that time comes, you’ll likely have to give up on some puzzles where you were mid-solve. Personally, I was perfectly OK with that and didn’t find it hurt the game at all, but I know plenty of people who would find that deeply unsatisfying. In the end, you’re the best judge of how that will affect you!

Our team of two escaped with just over a million pounds (as well as the diamond, obviously!). Given how much of the room we didn’t touch, I’d recommend coming with a team of four, even if you’re experienced enthusiasts.

Daylight Robbery is, putting it simply, the best heist game I’ve played. Plenty of companies have tried to deliver this concept, but none have come close to covering the ground the way this game did. This was an hour of adrenaline, packed full of as many puzzles as you could physically lay your hands on and topped off with a challenging and exciting finale. We were solving non-stop for sixty minutes and still missed out on a significant number of puzzles. If you’re close to Nottingham, this game should be on your itinerary.