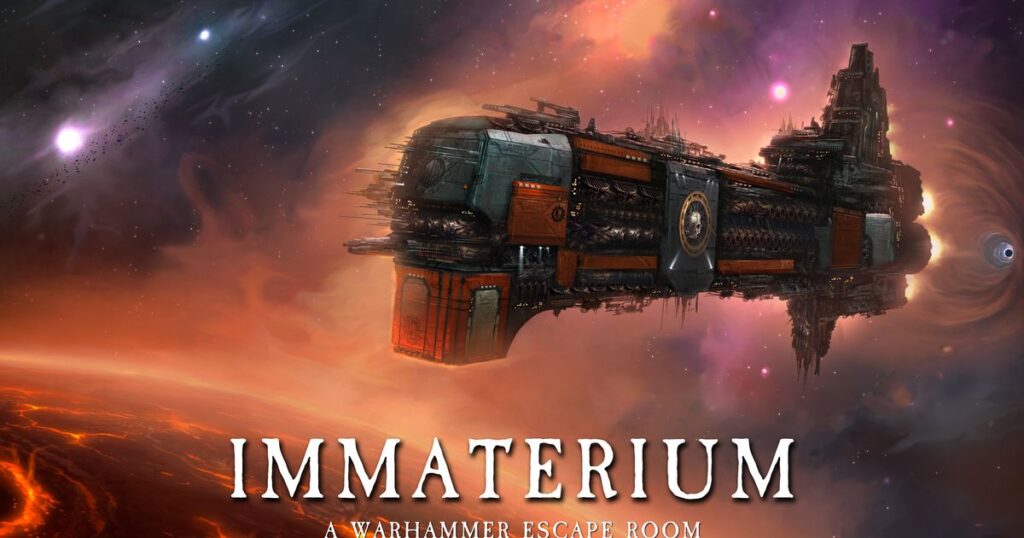 I’m not a Warhammer fan, but the news that Escapologic had secured the rights to create a game based on this iconic IP certainly piqued my interest. How do you translate the tabletop game through to a physical escape room? And, more importantly, can you make that engaging for teams, like ours, who barely had any experience with the subject?

The game throws you into a dying spaceship where you’re searching for an escape pod to allow you to flee before it disintegrates. They’ve managed to capture the gritty engineering feel of Warhammer but in a way that you could broadly ignore if it wasn’t up your street. In some sense, you could just think of this as a sci-fi game based on a spaceship but with shout-outs to the Warhammer universe.

Warhammer is meant to be larger than life, and so it feels appropriate that the game echos that. It felt like a huge space, with us constantly exploring new areas. One aspect I really liked was where they’ve given a glimpse beyond the areas you traverse to remind you that you’re in the heart of a very large ship. It’s a technique I’ve seen in a few sci-fi games, and it really helps to reinforce the sense of smallness that you really need to feel in these themes. It’s worth mentioning that crossing all these spaces isn’t always straightforward – expect to have to crawl/clamber at times, and definitely talk to them before booking if you have any mobility issues. By the end of this game, I felt like I’d had a workout, which is worth bearing in mind if you’re playing on a warm day and have somewhere to go afterwards!

It wasn’t just the space that was physical: the physical aspect also featured heavily in the puzzles. There were chunky props, physical actions and, unusually for escape rooms, a feeling that everything was robust. That physicality definitely lent more enjoyment to the puzzles and was a big part of why the start of the game zoomed by for us. Somewhere in the middle, we hit a rough patch and lost some of the early flow. Part of the issue there was that, with such a big space, when we got stuck on a puzzle, there was a lot of re-exploration to do to make sure we hadn’t missed anything relevant. Re-examining a room isn’t fun at the best of times but, when you have to clamber and crawl your way through it, it quickly becomes tedious.

The real problem, though, was the couple of puzzles we hit which we felt lacked user feedback. In both cases, we’d solved the puzzles without knowing. One of those felt particularly egregious because, even once we’d rechecked the puzzle on several occasions and convinced ourselves we were right, we still needed a hint to tell us where to look for what had happened. I think that’s a particular issue when playing a big game with a small team, but I feel that’s no defence; the player should always be confident when they solve a puzzle.

The finale of the game sees you grabbing an escape pod to freedom. I admire what they’ve aimed for here but, for me, it fell short. Rather than a thrilling finale, it felt like it took the shine off the excitement and physicality that had gone before. It’s better than just throwing you out into the corridor, but I feel like a pure video sequence would probably deliver a better ending.

Our team of two escaped with just under ten minutes on the clock taking – I think – one hint along the way.

Immaterium delivers a gritty but pretty set with fun, physical puzzles, although be prepared for that lack of user feedback to potentially leave you frustrated. For me, that resulted in an experience I enjoyed, but my partner, who’s less into sci-fi and physical escape rooms, was a lot less keen. Still, I’d recommend it to anyone who’s in Nottingham, but especially Warhammer or sci-fi fans or those who particularly like more physical challenges. If you have mobility issues (e.g. you can’t crawl), I’d probably steer clear of Immaterium, as I don’t think it would be possible to bypass those parts of the game without fundamentally ruining the experience.