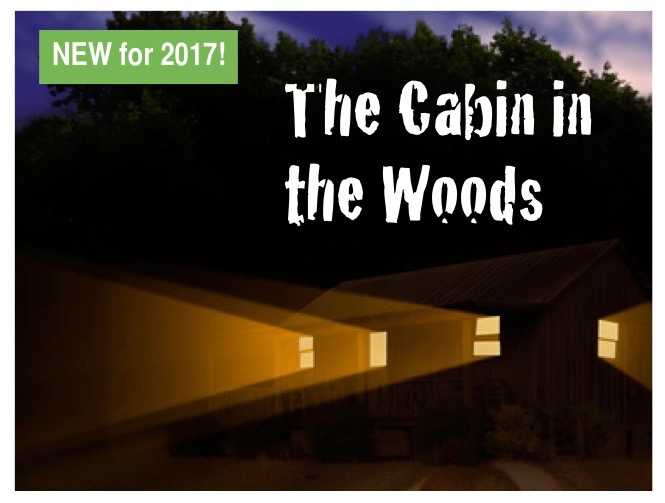 The first time you visit Escape from the Room, you’d be forgiven for assuming that you’d taken a wrong turning – this is a venue with games created by enthusiasts in their own house, so it’s right in the middle of suburbia. We’d played and enjoyed The Curse of Old Maid Millie the previous summer, so I was keen on getting back down to Sutton when Cabin in the Woods opened.

As ever, we got a warm greeting from Nathen and family, who were particularly accommodating with our two teams that arrived at different times and wanted to play as many of the bonus games and additional puzzles as we could fit in. Even as an enthusiast, I get confused about the exact options they have but, if I remember correctly, both their full escape rooms have an optional bonus section (with Cabin’s bonus being an optional extra and lasting 30 minutes) and, on top of that, there are two 30-minute games you can play as a little warm-up (Murder in the Village and the Cats of Old Maid Milly).

Cabin in the Woods is in fact a cabin at the bottom of their garden – you really have to wonder what the next step in their evolution will be… perhaps Lost in the Attic? 😉

Ben Young was investigating a number of reported supernatural sightings when he went missing. Tracking his last known whereabouts, you find yourself locked in a cabin in the woods. But all is not as it seems. Ben Young has left you an encrypted message that might just explain what has happened to him.

If you’re going to play this game, I recommend booking after sunset. There’s nothing quite like being led out into the darkness to a cabin at the bottom of the garden to start the immersion early. If you’re thinking this will be a pokey shed, think again. It is an impressive construction, and they’ve packed in more puzzles than you could possibly believe by looking at it from the outside. Oh, and in case I didn’t make this clear, you get to play a Cabin in the Woods game in an actual cabin!

The introduction carries on from the previous game, with a home-made video vibe, but for me it was just that little bit better produced and did a better job of setting the players on edge.  That over, it was time to search the cabin. It’s a pretty mainstream kind of game with mild satanic overtones but never anything that gets too terrible. I think the minimum age is seven and, while I wouldn’t take my children along quite yet, I certainly wouldn’t be worried about kids playing this once they’ve left primary school. Throughout the experience, they reinforce that creepy-but-not-scary feeling through the puzzles and the story.

As the game progresses, you start to unravel a bit more of that story, finding out what happened to the missing investigator and the occupant of the cabin. You might start off thinking that this game wouldn’t have much of a sense of exploration – it is, after all, just a cabin in a back garden – but there’s more than one way to create that sensation, and I was pleased to see that they hadn’t left it out of the game.

I enjoyed the puzzle – particularly a couple of nice physical elements – and, while they’re not likely to amaze you, they’re both plentiful and good quality. If you’re going to criticise this room, it’s probably on the heavy use of padlocks and the slightly weak locking mechanisms. That’s very much the style of their games, though, and it reminds me that this is at its heart a game created by enthusiasts. On the subject of puzzles, the bonus round adds some significant extra challenges, so it’s well worth signing up for if you’ve got time.

The game is very much created with first-timers in mind, so there were places where we immediately knew what we needed to do without solving an interim puzzle. That turned out to backfire a little, however, as we ended up completing a couple of puzzles only to find that they gave us no useful information. It was actually quite funny – like the room was getting its own back on enthusiasts.

The game is fairly open, with a variety of pinch points along the way that saw the team reunited for particular puzzles. This resulted in a slightly slow start where we didn’t really know what we were working on, but things sped up markedly as the game progressed. It’s not the strongest finale, possibly because we spent a good proportion of the end of the game solving a puzzle that we didn’t need to solve, but it closed off the game nicely, leaving us understanding what had happened in the cabin and to the investigator.

It took us 40 minutes to escape the room and another 22 to complete the bonus section. We probably had two or three clues via walkie-talkie along the way. We also played their mini games beforehand, which took 25 minutes (Murder in the Village) and just under 30 minutes (The Cats of Old Maid Milly).

I really enjoyed the love they’ve poured into this game, and the result was an experience that felt like it had been created by enthusiasts for enthusiasts. They’ve upped the quality of puzzles since their original game, which, along with a great setting, helped create a memorable experience.

We played as a team of four, which felt just about perfect for an enthusiast team – if you really want a challenge, go as a three, or alternatively you could probably afford to take a fifth. New players should probably take along a couple more (and skip the bonus section!), as there’s a lot to get through.